The Origins of Timekeeping

The history of timekeeping is a fascinating look into the evolution of life and commerce.

It marks a change from life that was lived simply in tune with light and darkness, to life framed by defined schedules.

Way back in medieval times, the ringing of church bells marked the daily pace.

As we know, timekeeping was later revolutionized by clocks with mechanical movements of gears and levers. Most mechanisms relied on weights and counterbalances to move the gears.

Then spring-driven mechanisms “sprung up,” first in Italy and Germany.

Throughout Europe, clock towers with or without mechanical chimes began to replace bell towers.

Clocks eventually made the move from church towers and public squares to homes, even though they were often important only to the wealthy and powerful. References to “pocket clocks”first appear in Italian writings from the late 1400s.

Watches of the time had only an hour hand; those sporting a minute hand did not appear until the late 17th Century.

And early personal timekeepers were large, many of them designed to be attached to clothes or to hang from a chain around the neck.

The mechanism typically had a hinged brass cover that could be ornately decorated or designed with a pierced grill, allowing the user a view of the face without opening the cover.

Glass faces did not appear until around 1610.

Early timepieces were not terribly reliable, but by the 19th Century, when punctuality became a virtue, clocks and portable timekeepers could be kept accurate to within a minute or two each day.

Today, vintage pocket watches are prized by collectors for both their history and their beauty.

Pocket watches are characterized by the size of the movement, with standard sizes ranging from 21/0s (1/2 inch) to 16 or 18s, each about 1 1/2 inches in diameter.

The larger sizes are common for railroad watches.

Pocket watches are also defined by type of movement, and they include:

Jeweled movements became the norm for all quality watches, and there are several different types of jewels used for watches.

Most common are ruby and sapphire, although diamonds and garnets are also seen.

Because the jewels are tiny, even natural gems add no dollar value to a collectible watch, but today virtually all watch jewels are synthetic.

A 17-jewel watch places stones to insure accuracy at points where they serve to reduce friction on moving parts.

This is the “gold standard” for watch movements, although a 21-jewel movement adds some additional capstones as a kind of insurance.

Watch cases may be of a variety of metals, including steel, gunmetal, pewter, gold, gold-filled and platinum.

They may be simple or ornate, but should be strong enough to protect the clock works. Covers, which add an extra layer of protection, vary by era and may reflect the use and purpose of the watch.

Gift watches, for both men and women, might bear monograms on the cover; sometimes emblems and scenes were etched into the cases, and occasionally a pocket watch cover would be jeweled or boast a painted porcelain insert.

The simplest pocket watches were designed for utility rather than good looks, and had no covers so that the time was readily apparent. 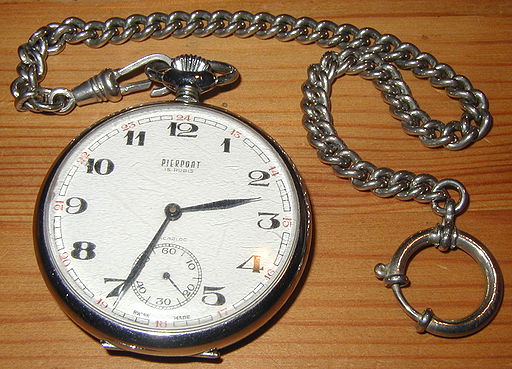 But these unadorned pocket watches can be among the most valuable.

Pocket watches were typically designed to be worn by men, and were carried in trouser or vest pockets, attached to a waistcoat by a decorative fob.

Delicate small watches, many times with etched cases, were worn by women on chains around their necks; sometimes they were attached to small pins.

For a time in the late 1800s and early 1900s, pocket watches were a traditional gift for high school graduates, and they became treasured pieces of decorative jewelry as well as reliable timekeepers.

The tradition of giving a “gold watch” for an employee’s retirement actually was a time-honored tradition for many years in this country, and in other nations.

Big names in pocket watches include Waltham, Elgin, Hamilton, Hampden and Ball. And, today, both vintage and contemporary pocket watches are enjoying a kind of resurgence among trend-setters.

You can buy a brand new pocket watch from Hermes, Omega, Vacheron Constantin, and several other designers and watch manufacturers.

If you’re interested in vintage watches, either to wear or for a collection, shop flea markets, online auctions, and reputable antique dealers, depending on your preferences and your budget.

From the mid-1800s to the mid-20th Century, railroads moved people and goods across vast territories in Europe, the United States and Canada.

Then, as now, time was money, and trains had to be kept on schedule. The railroads would not have been nearly as efficient without the venerable, large, open-face, reliable, portable timekeepers that came to be the symbol of railroad conductors and engineers worldwide.

Railroad watches are 16-18 in size, with no cover, large numbers and a classic face. 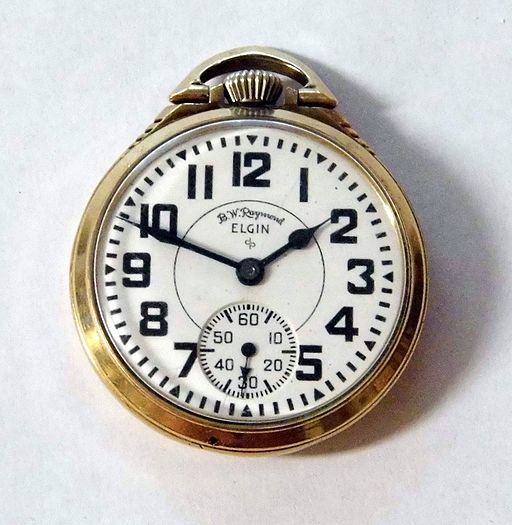 The case is usually unadorned, and often of simple steel, but from a well-known maker vintage railroad watches are highly collectible, sometimes valued at several thousand dollars.

If you’re interested in learning more, there are a number of resources available, including the National Association of Clock & Watch Collectors, nawcc.org.