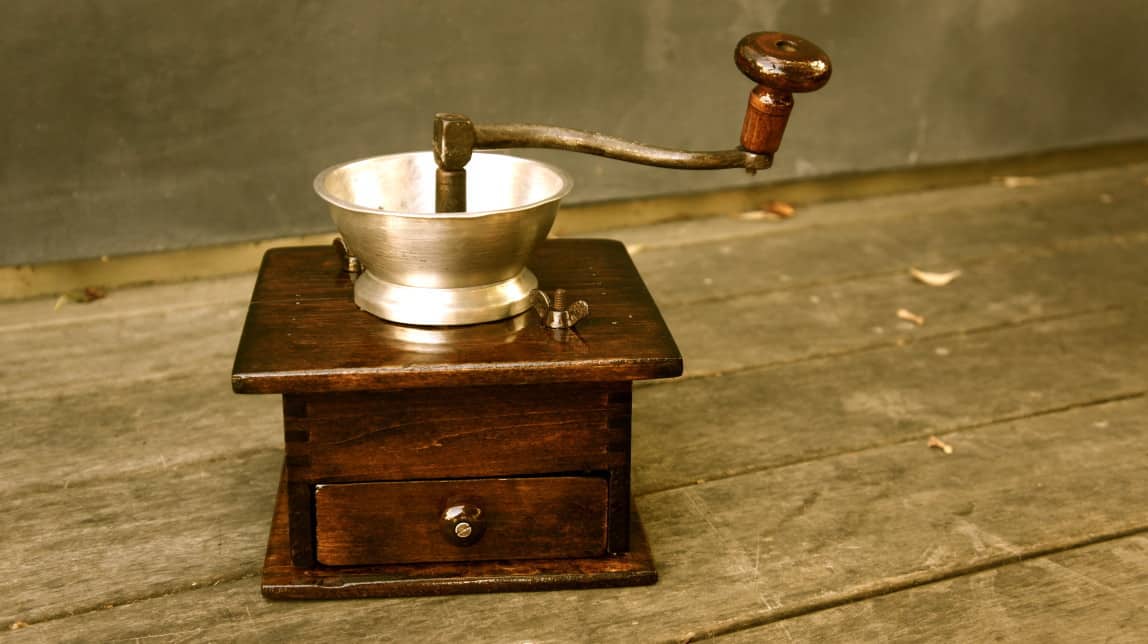 Do you just love the smell of coffee in the morning? For those who need their fix, the classic coffee machine has become the most cherished kitchen appliance.

But for those of us who have coffee coursing through our veins and whose hearts beat for the smell of fresh beans, you just might be craving something more.

Sound like you? Great! Welcome to the rest of your life.

Becoming an expert on antique coffee grinders is something I’ve always wanted to do, so here I am to tell you more about them and how much fun they are to collect. 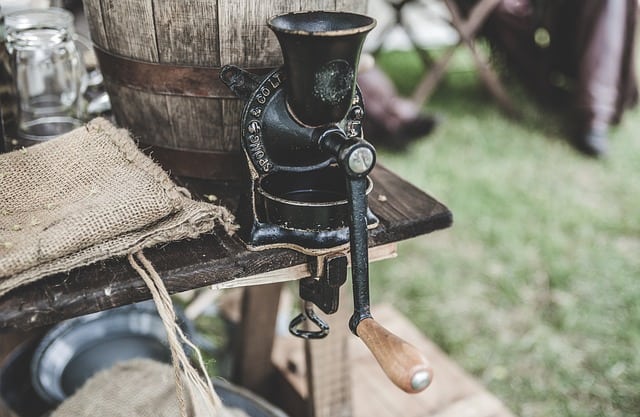 The earliest coffee grinders were simply a mortar and pestle. That thing you used for your science experiments in school was the most efficient way people had of grinding their precious beans.

The ancient Egyptians used this method to make the delicious drink we now take for granted on a daily basis.

However, there are several bronze coffee mortar and pestles housed in museums that date back to the seventeenth century. They belonged to affluent individuals and were prime examples of exquisite German, English, and Dutch craftsmanship.

Because grocery stores in the 18th and 19th centuries only sold coffee beans, you had to have something to grind them. Most stores had a coffee grinder on the counter and they would grind your beans upon purchase.

But those who wanted their own coffee grinder at home could purchase smaller versions. 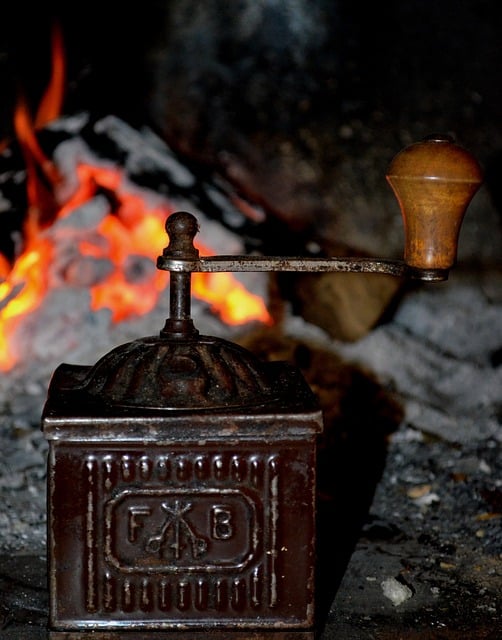 The first American coffee grinders were cast iron. They had a wheel on the side with a crank attached that you used to grind your beans. They were originally designed as floor models, and they were very large and heavy.

You can still find these today and most date back to the late 19th century.

They’re made of cast iron, they’re heavy, and they range in size from countertop size to the much larger floor model size. Many still work just as they did when they were brand new. 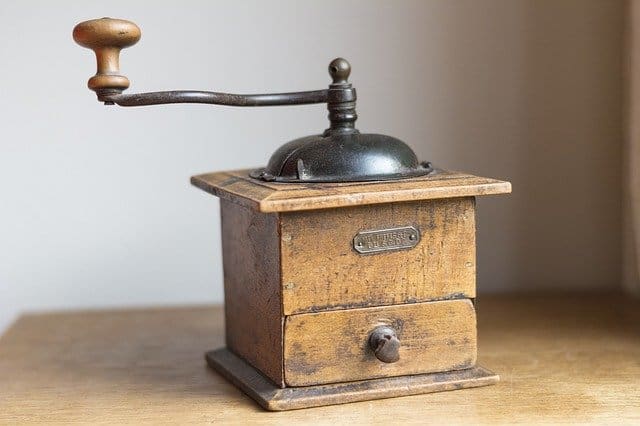 A box coffee grinder is just what it sounds like. It has a reservoir that feeds beans through a hand crank, and after the beans are ground, it stores the grounds in a box underneath.

This makes it easy to contain the mess and make the most of the beans you grind. You would see them a lot on drug store countertops during the late 1800s.

Wall mounted coffee grinders became a popular kitchen commodity in the late 1800s and remained popular through the turn of the century and well into the 1900s.

You put the beans in the top and turn a hand crank on the side. They didn’t have a reservoir, so you had to hold a bowl underneath to catch your grounds. 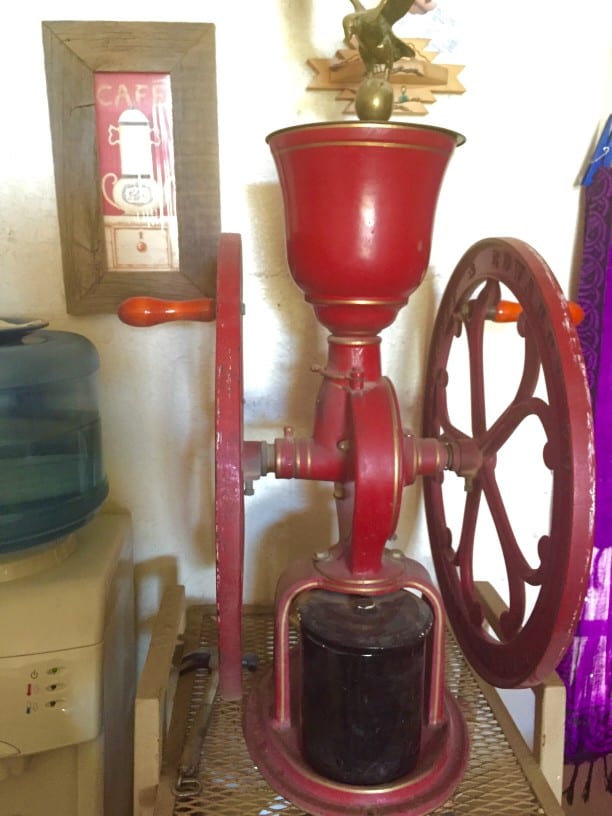 Much like a wheeled coffee grinder, these models were patented a few years later, but use the same mechanism to grind the beans.

However, due to their two-wheel design, they have a certain symmetrical aesthetic appeal that many collectors like.

Philadelphia Enterprise was one of the most prevalent manufacturers of coffee grinders in the United States.

You can still find these today, and they’re not in short supply. The company was founded in 1864 by John Gulick Baker.

They made coffee grinders of all sizes and the company grew quickly. They manufactured everything from bolts to large, motorized coffee mills.

These mills were seven feet tall and weighed nearly 500 pounds.

They also made tobacco cutters, juicers, and cast iron banks. The company even won the Centennial Medal for outstanding contributions to the American public in 1876.

Most general stores used the Enterprise Model No. 12-½ coffee mill for grinding large amounts of coffee. It was made between 1886 and 1898. It was 42 inches tall with two wheels 25 inches in diameter. It weighed 140 pounds and was made of cast iron.

If a general store owner could afford such a luxury, it was a status symbol. Most of these types of grinders were painted bright green or red and had some decorative decals.

In true Victorian style, some even features gold painted details for a more deluxe appearance.

Flower motifs on the wheels even made them more attractive for women shoppers, enticing them to buy coffee so they could watch the machine work. 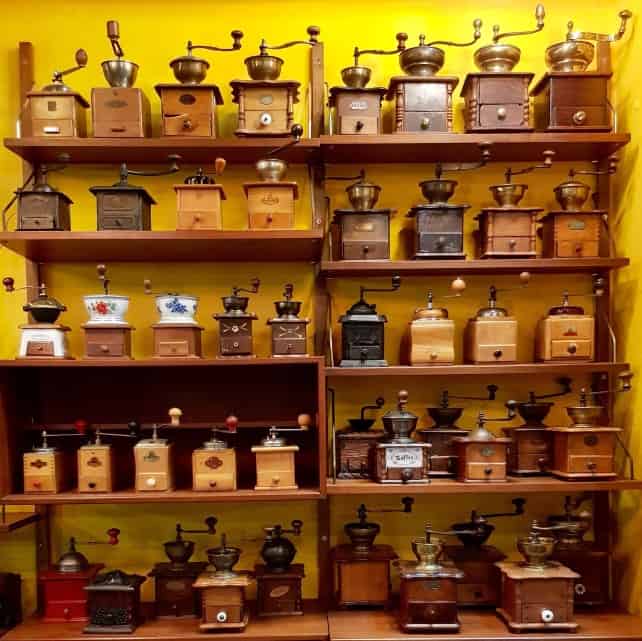 The value of an antique coffee grinder could range front $20 all the way up to $100, depending on size, type, age, and condition. There are other factors that contribute to the value that you might not think about.

Evaluate the grinder’s condition and make note of any rust or cracking. If you can test it to see if it still works, function is something that can contribute a lot to its value or how easy it will be to restore.

Cast iron rusts more easily, but if the rust is light, it will be much easier to clean up than significant rust damage. Wood, porcelain, and china coffee grinders crack, which can detract from the value.

Appearance will impact the value, but decorative beauty is in the eye of the beholder. While some antique coffee grinders are plain or mechanical looking, you may enjoy the look of these better than something that’s been stained or painted.

You can also check for manufacturer labels. If you find a common one, you may have a more valuable item than other unknown or unmarked grinders.

Some of the more well-known manufacturers include:

You can compare your grinder to similar models recently sold to get a better idea of how much you should pay.

Wooden coffee grinders in rough condition usually sell for about $20. A porcelain grinder from a well-known manufacturer that might have a few minor chips or cracks could go for $100.

However, a large, professional coffee grinder made by a manufacturer like Philadelphia Enterprise will sell for $300 or even more.

For the collector, the thrill of the chase is what makes collecting these antique coffee grinders so much fun.

And if they still work, that’s an added bonus.

However, even for people who just want to add a little farmhouse flair to their kitchen, a small countertop coffee grinder might do the trick. They’re relatively affordable and fun to look at.

Sarah is a God-fearing wife and mother of four. She enjoys spending time with her family and the great outdoors. Experiences over things is her mantra, and she loves rustic farmhouse decor, wood burning stoves, and old-timey practices that need to make a dramatic comeback.

A Guide to Vintage Living

The Old Timey is a place to learn about the best vintage and retro products, unique collectibles, cultural pastimes and more. We are a team of passionate researchers, writers and collectors. If you like what you see here, please feel free to subscribe for updates.