When most people think of ancient writers, they imagine them with a piece of parchment and an elaborate quill pen. This tool has a vast history and was used to record many famous documents. Below you’ll discover more information about these curious writing utensils. So let us have a look at where it all started.

Quill pens have been around since the 6th-century, and they were one of the leading writing tools during the Middle Ages and until the 19th-century. While it’s unknown where they originated, it is believed that historians first used them in Seville, Spain.

A user would take the feather and slide a knife around the end to form a sharp tip. They would then hollow out a small portion above it to hold ink. Once this was done, the quill was dipped into an ink bottle so the writer could scribble their message.

While quill pens were popular for centuries (especially during the Regency Era), many soon lost interest in them due to the newly invented fountain pen.

The first fountain pens were similar to feather quill ones but featured a quill fastened with an ink barrel. This way, you could write continuously rather than having to reapply ink after every other word.

While prominent people mainly used fountain pens at first, they soon took over the writing world and were widely accessible starting in the 1940s.

Then decades later, a Hungarian Journalist  László Bíró, started to work on new designs for the ballpoint pen.

The ballpoint pen made a turning point in the evolution of pens due to it being durable, more convenient than other pens because you did not have to worry about the ink going all over you.

It can also write on multiple surfaces, for example:

What pen came before the quill pen?

The reed pen was invented in 3000 BC. The need for pens started when people discovered papyrus, and the Egyptians created reed pens to write on the papyrus and parchment paper.

What is a Quill Pen Made Of?

A quill pen is made from a bird feather, especially from large avians like geese, swans, and turkeys. This is because they are durable and have a thicker quill which can hold more ink.

However, depending on the type of writing, the feather pen might also be taken from a crow. A crow feather has a thin quill that allows you to write delicate strokes. Because of their fine lines, crow feathers weren’t used for writing but rather mapmaking.

Songbird feathers were also utilized, but they weren’t always the best for writing because they were smaller.

Before one used a quill pen, they had to cure it. This process ensured that its tip was soft to grasp ink but flexible enough to glide across a piece of paper. To cure the feather quill, some dipped the nib into hot ashes while others quickly put it into a boiling water pot.

How Were the Feathers Gathered?

The feathers weren’t plucked from living birds. Instead, they were collected from the ground during migrations or the molting season.

Since the feathers were often sparse, only a handful was obtainable each year. To meet demand during the 1800s, many farmers used inhumane methods to collect feathers and sell them.

At first glance, it might seem like all quill pens are alike, but this isn’t the case. There are quite a few aspects of a feather pen that many look at before they use it.

One is the natural design of the feather. Some preferred a quill that curved more to the right or the left, depending on their dominant hand. This helped them write with ease and prevented their hand from sliding over the ink.

Many writers wanted to embellish their papers with something striking. Because of this, they didn’t mind the curvature of the quill but rather how large and colorful the feather was.

The quill pen wasn’t just used to write, and many times, it symbolized someone’s job and intellect. Today, many writing and history organizations still use the image of quill pens for events to pay homage to this vital instrument.

The quill knife was the primary tool used to cut and sharpen the quills, and it was known as “dressing.”

Examples of Quill Pens and Accessories

Created in the mid-1800s, the mourning quill pens are believed to have been produced for a Victorian family after they experienced a tragic death. One pen features the deceased’s date of birth written across it with small gems, while the other has their death date. Unlike most quill pens, these were more than likely used as decor rather than for writing.

America’s early founders used the Syng inkstand to dip their quill pens into as they signed the Declaration of Independence and Constitution. Constructed out of silver, this inkstand featured a small inkpot, quill holder, and a ponce pot which contained powder that helped smooth out the paper before they wrote on it.

The Copp family quill pens are a popular example of quill pens used during the 1700s. The Copp family lived in Connecticut and was a member of the Puritan Great Migration. The family didn’t have much, so they used simple quills from their farm as writing utensils. The pens aren’t equipped with a large feather at the end, but the quills are still in good condition, and you can see traces of ink within them.

Quills pens were used to sign the iconic Magna Carta. It’s believed that scribes needed numerous goose feathers to create their flowing script. Due to the script’s intricacies, these pens needed to be sharpened constantly with a knife.

As the scribes composed the Magna Carta, they would dip the quill into iron gall ink. This ink was a combination of iron galls and shavings, honey, and gum arabic.

Where to Find More Information About Them

If you’re interested in learning more information about quill pens or want to purchase one, you can do a quick search online. You’ll find a variety of reputable sites that dive into the history of the quill pen, such as the Farmers’ Almanac or Smithsonian.

You might also discover some shops that create usable quill pens. If you’re up for an adventure, you could even consider making your own.

While many view quill pens as a writing novelty today, they were once the only writing utensil available. With them, countless people have been able to record their thoughts. They also paved the way for more advanced instruments, such as the fountain pen.

What replaced the quill pen?

The quill pens were replaced by steel point pens, also known as dip pens, in 1822. John Mitchell developed these steel point pens from Birmingham. These pens functioned the same as the quill pen but were stronger and more friendly on your wallet.

So we have looked at the history of pens and how they all started and evolved throughout the years, but where are we today?

Sadly, if our great-grandmas and grandpas could see what we are using today, I’m sure their hearts would feel heavy and be filled with sadness. Why, you might ask? Because today only a handful of people still use pens, most use their phones, tablets, or laptops to write.

Question: How long does a quill pen last?

Answer: In the olden days, your quill pen would last you a week if you were lucky.

Question: What is a quill pen used for?

Answer: The quill pen was used for writing. After the quill pen, the dip pen, the nibbed metal pen, and the fountain pen were invented, and the ballpoint pen.

Question: When was the quill pen created?

Answer: The quill pen was created in Seville, Spain, in the 5th to 6th centuries.

Question: When did we stop using quill pens?

Answer: The quill pens stopped in the mid of the 19th century when the steel pen points were introduced.

Question: Can I do calligraphy with a fountain pen?

Answer: For traditional calligraphy, a fountain pen may not be the best option. But they do make great tools for faux and modern calligraphy.

Congratulations, you are now an expert in the history of pens. I hope you found this article interesting. Did you know about the history of pens and where it all started? What pen did you find interesting? Let us know in the comments below. Do you still use pens today? Or do you use your laptop or phone? 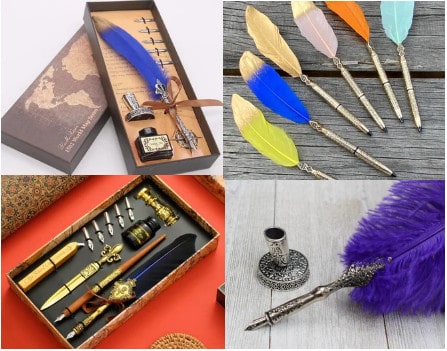 Check out Etsy's feather quill pen selection for the very best in unique or custom, handmade pieces from their shops.