Many of the most prominent individuals around proudly rep their facial hair. Some of their beards have even lived on as part of their legacies or iconography. Let’s dive into these fascinating stories and learn about history’s most famous beards.

History’s most famous beards are typically made famous by those wearing them. However, some people, like Hans Nilson Langseth, are known because of their facial hair. Still, men like Abraham Lincoln, Karl Marx, and ZZ Top’s Billy Gibbons are icons in their fields and in the beard world.

Spoiler alert: someone on this list was offered $1 million to shave his beard — which he refused. Another person’s beard is responsible for the creation of your favorite childhood board games. Keep reading to find out who wore these influential whiskers and so much more. 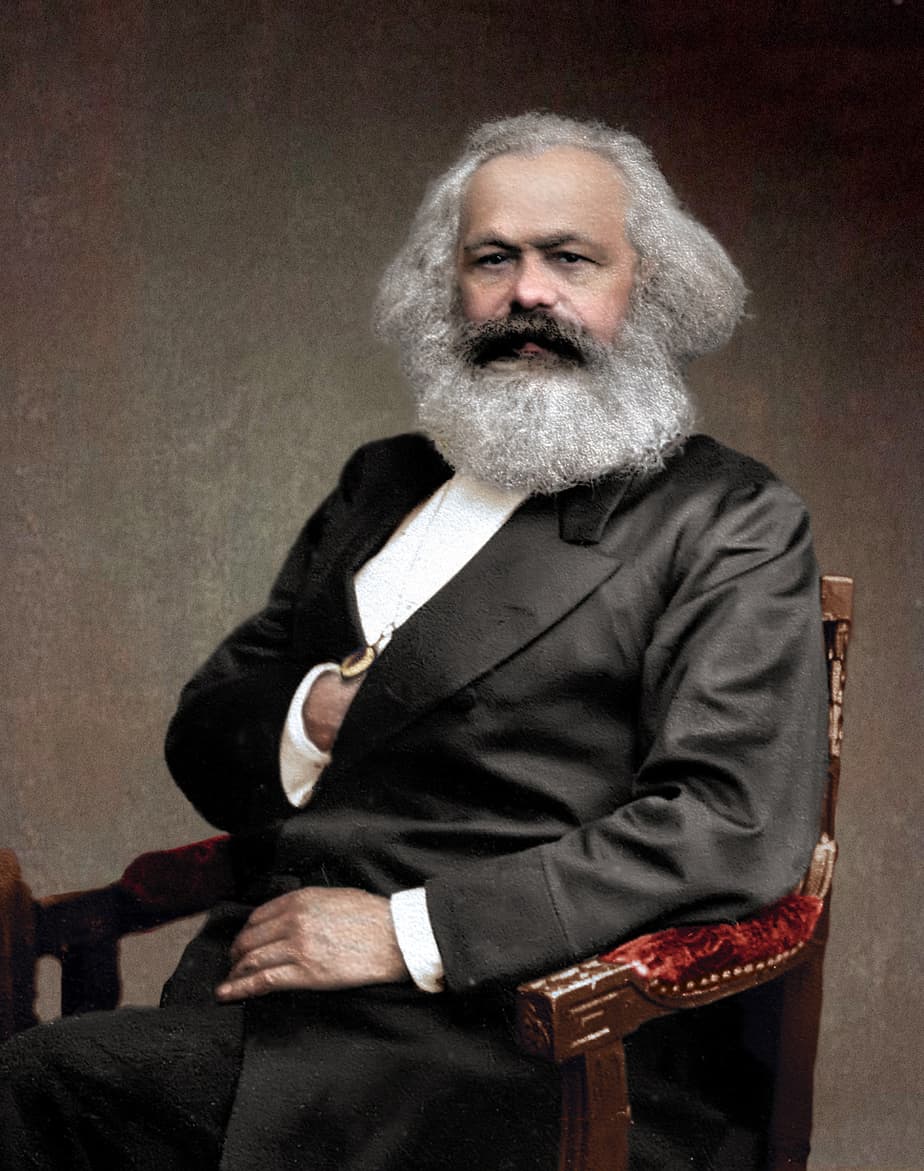 It’s only fitting that a man as revolutionary as the communist philosopher, sociologist, historian, political theorist, and economist Karl Marx has a beard that embodies his radical, hardworking tendencies.

Marx’s full and bushy whiskers are so famous that they’ve become iconography of the leftist movement. You can find images of his facial hair on t-shirts, mugs, and just about any accessory in the book.

The man may have wanted to seize the means of production, but Marx also seized a top spot in the list of history’s most famous beards. 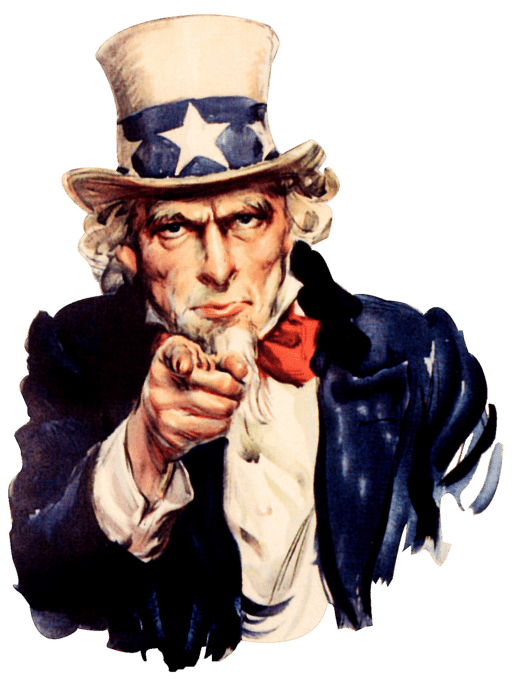 Uncle Sam’s beard is one of the people. Why else would thousands don white faux facial hair every Fourth of July and Halloween if not for his deep entanglement with American identity?

However, the beloved patriot and face of the United States didn’t always bear those classic white whiskers. Up until the mid-1800s, Uncle Sam was completely beardless. It was political cartoonist Thomas Nast who initially added the facial hair — and the rest is history. 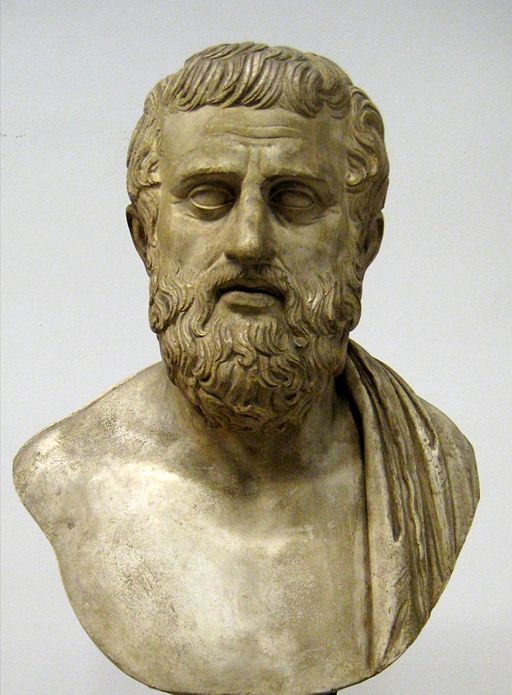 You may not know this Greek playwright by name, but you’d certainly recognize his bearded bust.

Born in 496 B.C.E., we don’t have any photos of the famous Sophocles. However, his iconic curly mop and “wooly” beard are etched in stone — literally. All we have to remember his facial hair are statues. Good thing there are a lot of them!

Aside from the beard, Sophocles wrote over 100 tragedies throughout his life, seven of which have survived into the modern era. You might recognize his most notable titles, including Oedipus Rex or Electra — or maybe you just know him for his beard (and that’s okay with us). 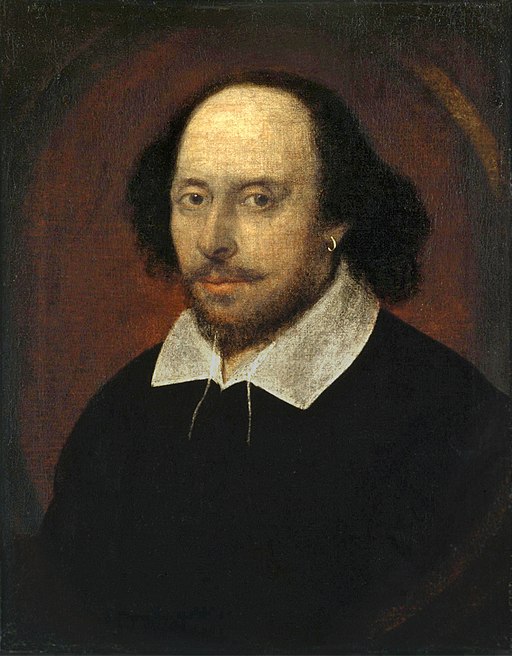 You know you’ve made it when people can recognize you solely from your facial hair — even when you’ve been dead for hundreds of years. Well, maybe you also know you’ve made it when you’ve influenced endless other artists, your work has been adapted for the big screen, and your name becomes synonymous with English literature — but still, the beard thing is a pretty good indicator too.

Shakespeare’s wispy Van Dyke and chinstrap crossover may have already been popular at the time, but there’s only one man who comes to mind when we see this classic look.

Next time your local Shakespeare festival pops up, consider trimming your whiskers into his iconic style. You’ll get a few compliments. We guarantee it! 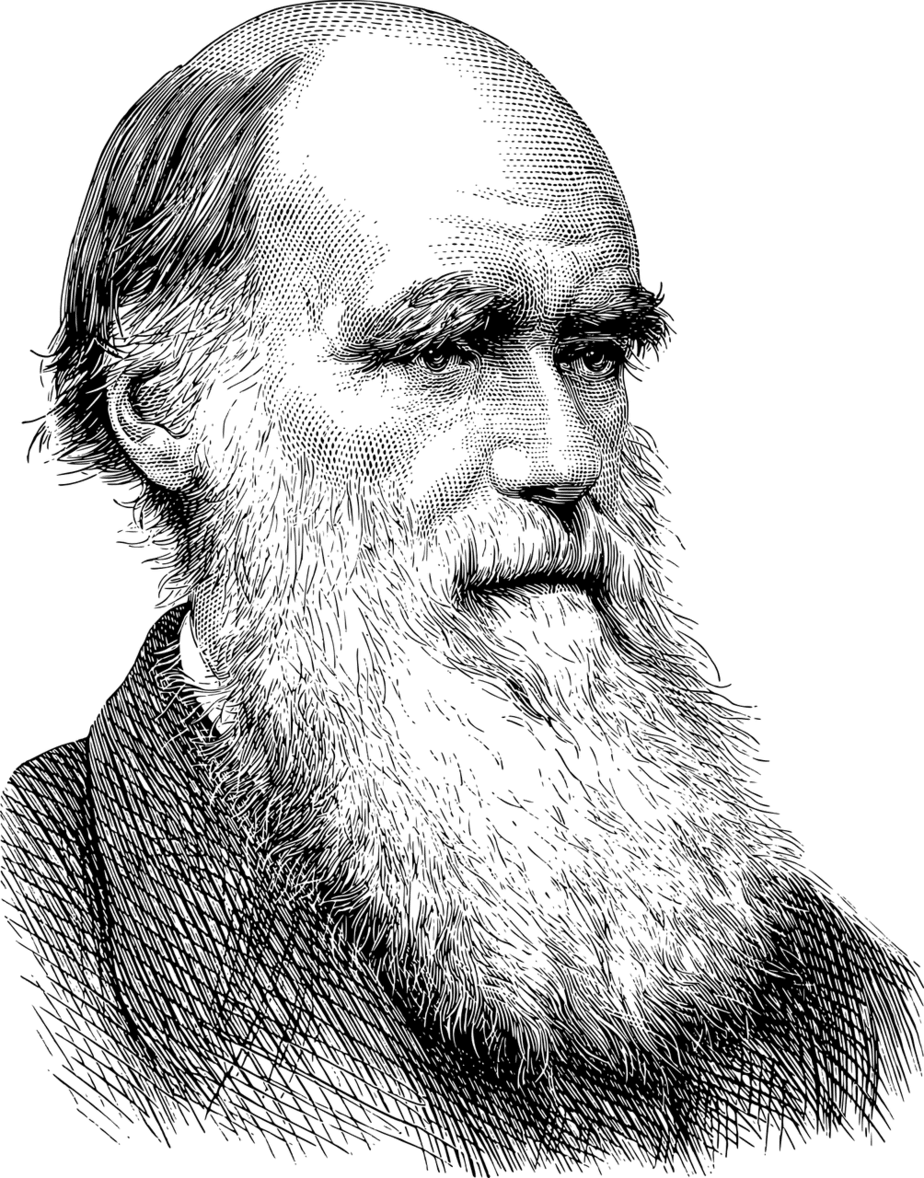 Darwin may be considered the father of evolution, but let’s talk about his facial hair’s evolution.

This renowned scientist and researcher didn’t always rep that iconic bearded style, but interestingly, he grew it out.

Darwin’s work focused largely on sexual selection — animals’ tendency to choose mates based on desirable traits. For example, a male peacock will display its gorgeous, expansive feather to attract a partner. In the peacock’s mind, the better the feathers, the better the mate.

Basically, animals do this because it shows promise that the next generation will also have these attractive traits. Thus, they can easily find a partner to mate with. The whole concept stems from the goal of reproducing to keep the species alive.

Humans are like that too. Beards are traditional symbols of masculinity, meaning they may play a role in attracting mates — even if it’s subconscious.

Darwin knew this — maybe that’s why he opted to grow one of his own. 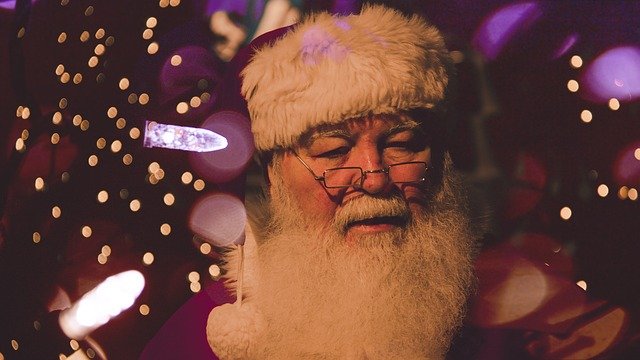 This North Pole dweller may not be the kind of figure you expected on this list of historical beards, but how could we forget good old Saint Nick?

Santa Claus has the most iconic of all beards. Even young children can recognize this jolly fellow from his full, snow-white whiskers. That classic face — hair and all — is undeniably synonymous with the Christmas season.

If Mr. Claus is your beard-inspo, we won’t judge you. 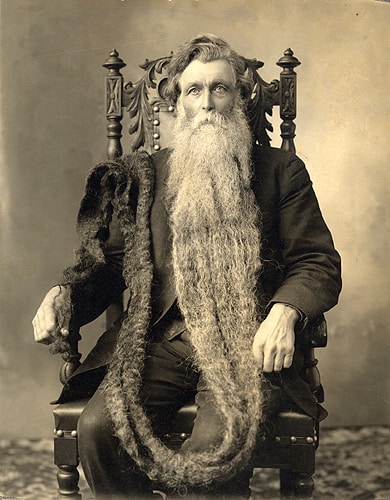 There may be one or two names on this list that you aren’t familiar with, but don’t worry — we really didn’t expect you to know this one. So why did he make the cut?

Hans Nilson Langseth holds the record for the longest beard in the world. We consider that pretty historical. This record-holder’s beard measured in at a whopping 18 feet 6 inches (5.6 meters) long. That’s almost as tall as a giraffe!

For context, the world’s second-longest beard belongs to Sarwan Singh and clocks in at a mere (but still impressive) 8 feet 2.5 inches (2.5 meters).

Langseth passed away in 1927 but wasn’t buried with all of that hair. A family member trimmed his historic beard when he passed and was only left with about a foot of it!

If you want to check out some of the world’s longest beard, the chopped lock is on display at the Smithsonian Institute. 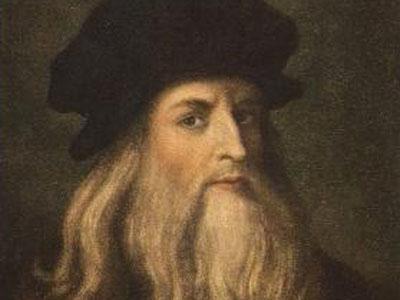 We’re all familiar with da Vinci’s masterpieces, including the Mona Lisa, Lady with an Ermin, and The Last Supper, but not everyone knows what the man looked like. For starters, he had an outstanding beard.

The artist was a devout beard-lover throughout his life. His trailing whiskers grew down to his sternum and out to his shoulders. Da Vinci’s flowy, wavy beard was, of course, perfectly manicured. What else would you expect from such an artist?

It’s safe to say that his facial hair was a masterpiece in and of itself — one that’s been overlooked for too long. 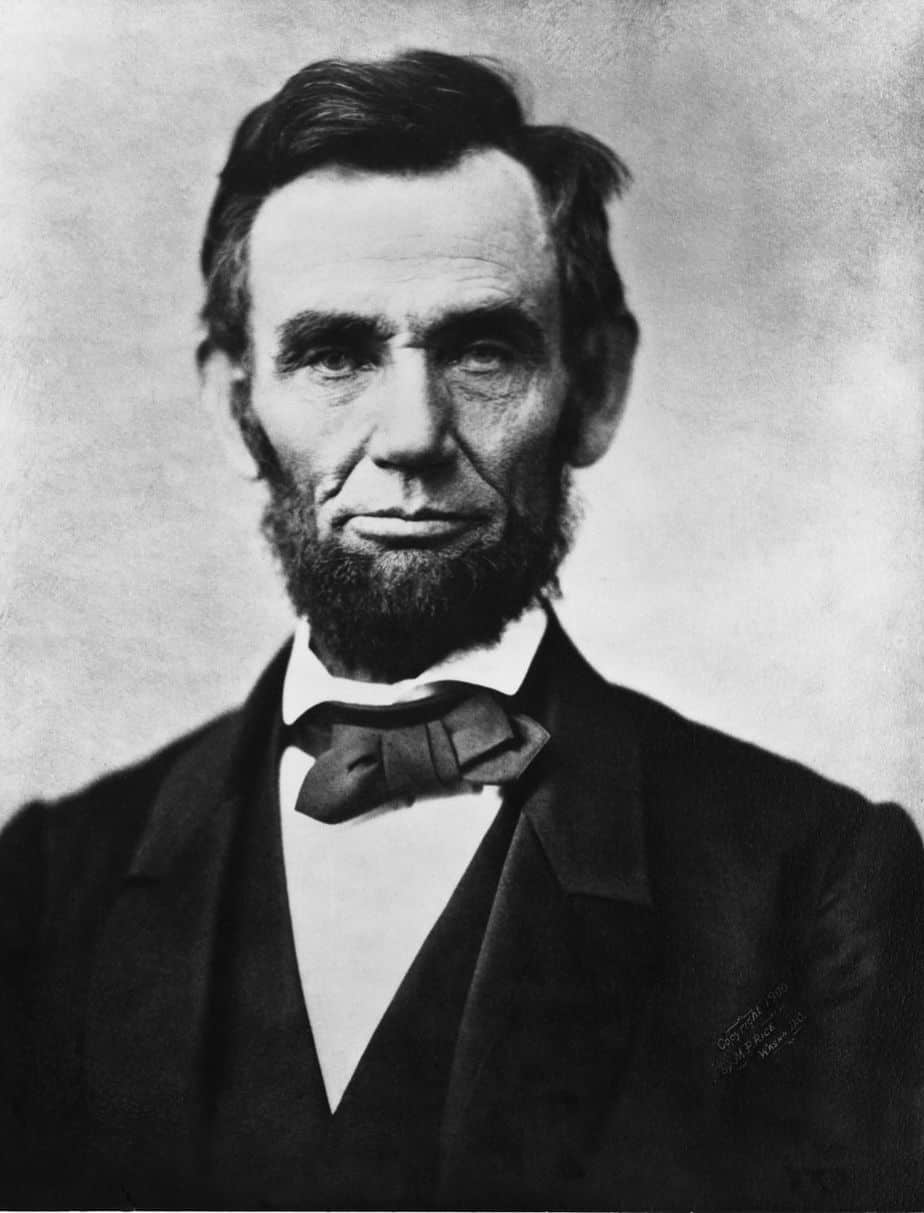 Better yet, did you know he grew out his iconic beard because an 11-year-old -girl suggested it? That’s right — during the election of 1860, public distaste over Lincoln’s appearance began to grow. People openly mocked the future president for his skinny face and lanky frame.

Some Republicans chatted about how “cultivat[ing] whiskers and wearing stand[ing] collars” would drastically enhance his look. Enter Grace Bedell: a young Lincoln supporter from New York. The girl decided to compose a letter to Abe suggesting he give this a shot to increase his popularity amongst voters.

Lincoln followed Bedell’s advice, but only after the election. As it turns out, the bearded look really did suit Abe.

Can you imagine how different the Lincoln memorial would look without his iconic facial hair? We’re glad we don’t have to wonder.

While the public generally loved the beard, Milton Bradley probably had mixed feelings on the addition. At the time, Bradley had recently made a lithograph featuring Abe’s clean-shaven face. Now that the president had updated his appearance, Bradley was out of work. Instead, he turned to board-game-making. As we know, that story has a happy ending for Milton Bradley. 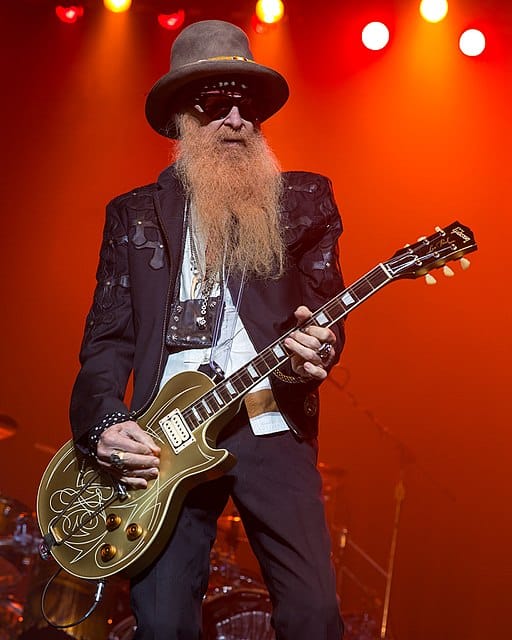 ZZ Top is known first for their beards and second for their music.

The band’s lead vocalist and guitarist Billy Gibbons rocks whiskers renowned across the entire industry. While only two members wear those flowing beards, the whole band is famous for it. With a frontman like Gibbons, how could they not be?

The beards weren’t a part of ZZ Top’s original look. It wasn’t until the band took a three-year-hiatus that Gibbons decided to grow out his facial hair. Since then, he hasn’t turned back — not even when razor brand Gilette offered him $1 million to shave the locks off.

Gibbons himself has confirmed that his revered beard is heavily insured. If that’s not reason enough to go down as one of history’s most famous beards, what is?

Have we piqued your interest in all things beard? To learn more about proper grooming habits, facial hairstyles, or other famous beards that didn’t make the list, head on over to these industry experts:

Many of history’s most famous beards weren’t around in the early days of their wearer’s careers. Luckily, all of these notable men jumped on the facial hair bandwagon sooner than later. Some bearded icons like Charles Darwin and Abraham Lincoln have fascinating stories attached to their beads, while others like Hans Nilson Langseth just loved growing theirs out.

The only question left to be answered is: does the bear make the person famous, or does the person make the beard famous? We’ll let you decide.