Typewriters aren’t used much anymore, but they haven’t lost their luster. They’re intriguing machines that are excellent vintage accents in your home.

Underwood was one of the most well-known manufacturers of typewriters in the 20th century, and you may be surprised to find out that there were millions produced and they were so well built that they’re very easy to find and most of them still work.

If you’re in the market for a vintage typewriter, one of the popular Underwood type writer models will likely be the easiest for you to find and the best option, whether you’re going to use it or put it on display for everyone to see.

History of the Typewriter

The first early typewriter was made in 1575 by an Italian printer. It was a machine called the scrittura tattile and it impressed letters onto paper. It was rudimentary at best, slow, and never commercially produced.

In 1714, a patent given to Henry Mill described another machine similar to a typewriter. The description on the patent explains that one of the machines was actually produced. 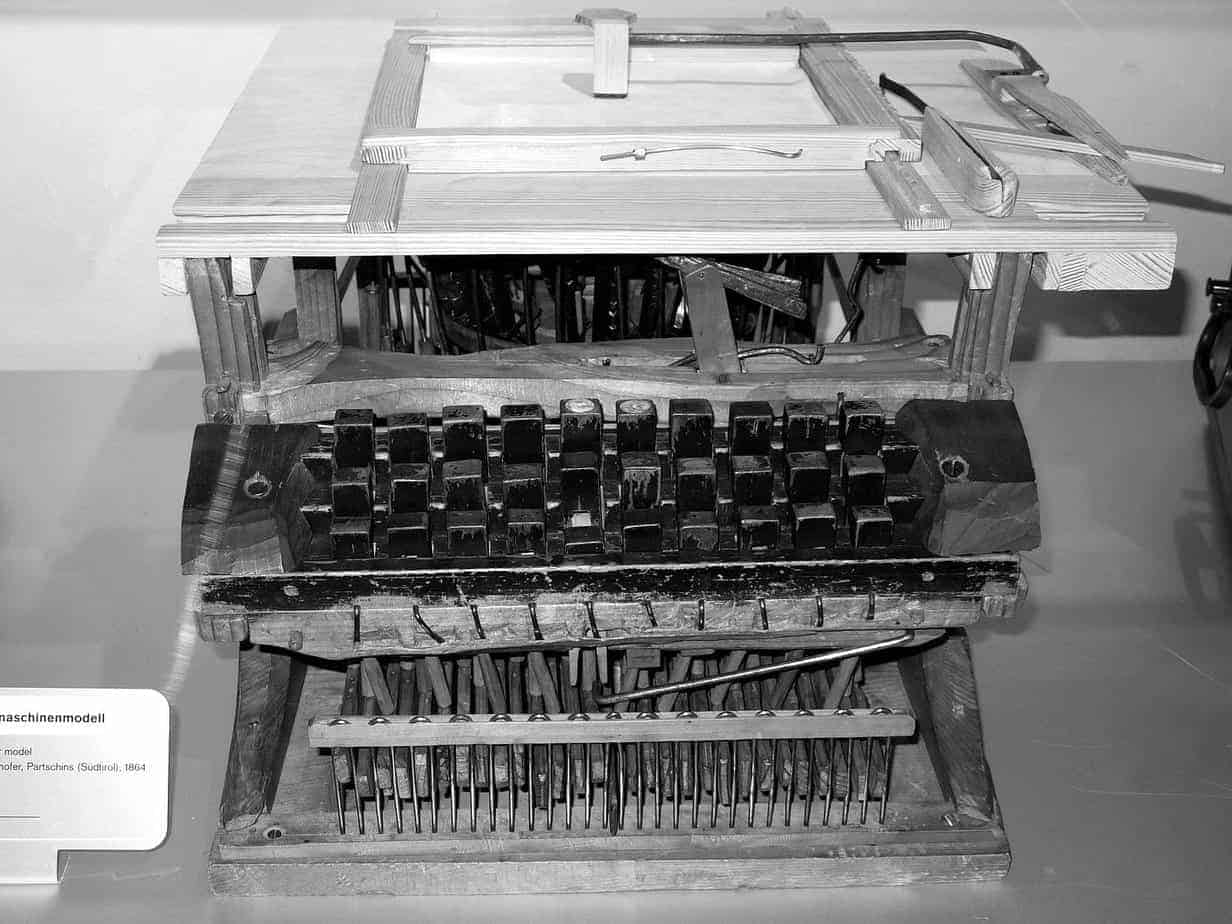 Between 1802 and 1870, there was no shortage of typewriters produced. They were all built by individuals, there were no two alike, and they were not commercially manufactured. Here are a few examples:

The Hansen Writing Ball was the first commercially produced typewriter. It was invented in 1865 by Reverend Rasmus Mailing-Hansen and production began in 1870. It was successful in Europe and could still be found in London offices in 1909. 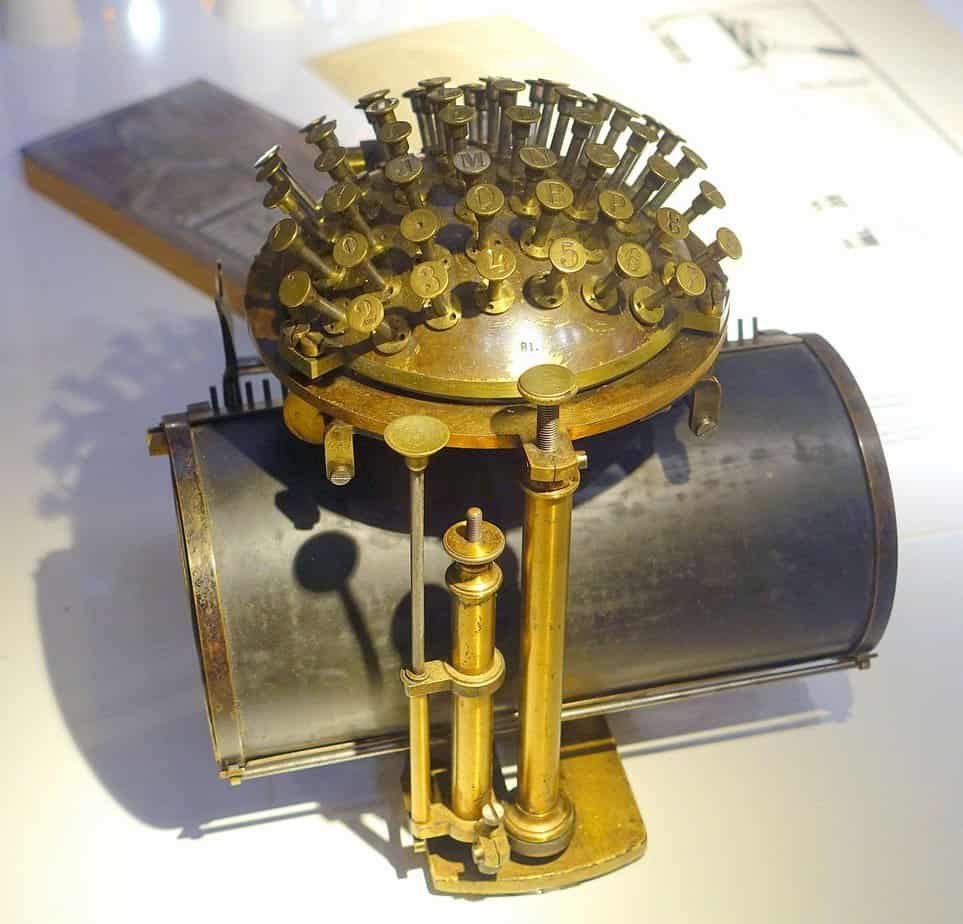 Because some of Mailing-Hansen’s models returned the typewriter’s carriage to its original position using a solenoid, people consider him the first person to invent an electric typewriter.

While the Hansen Writing Ball was the first to be commercially produced, it wasn’t nearly as popular as the Sholes and Glidden typewriter invented in 1878. It was the first typewriter with a QWERTY keyboard, and thanks to its success, other machines adopted the same keyboard rapidly. 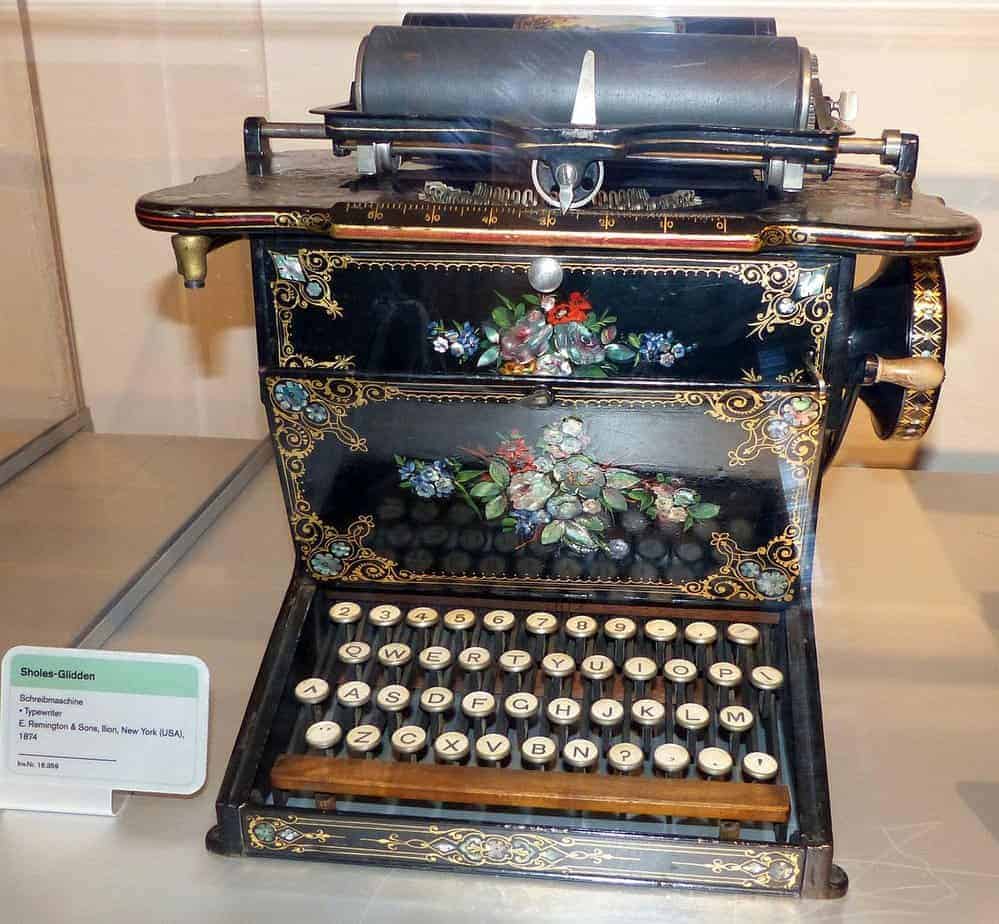 With the entrance of personal computing, use of the antique typewriter fizzled out. While rapid technological change is common today, the old typewriter dominated with little change for close to 90 years and its contribution to typing should not be underestimated.

Underwood Typewriter Company was founded in 1895 by John T. Underwood. Prior to founding the company, the Underwood family produced carbon paper and typewriter ribbon and starting in 1874.

They manufactured these products for Remington, but after Remington decided to manufacture ribbons on their own, the Underwoods shifted to typewriters.

A German-American by the name of Franz Wagner invented the first Underwood typewriter. When he showed it to a young entrepreneur named John T. Underwood, Underwood like it so much that he bought the company.

In 1910, Underwood began including adding and subtracting machines to their typewriters. By 1939, Underwood Typewriter Company had produced more than five million machines.

Underwood attempted to promote itself with a giant typewriter by building the largest typewriter in the world. It was on display in Atlantic City for several years. Each key was big enough for a grown person to sit on.

In 1959, Italian-owned Olivetti purchased a controlling stake in Underwood, and by 1963, the merger was complete. The U.S. Olivetti-Underwood company transitioned to making primarily electromechanical calculators, but the Underwood name was seen on typewriters in Spain all the way up until the 1980s. 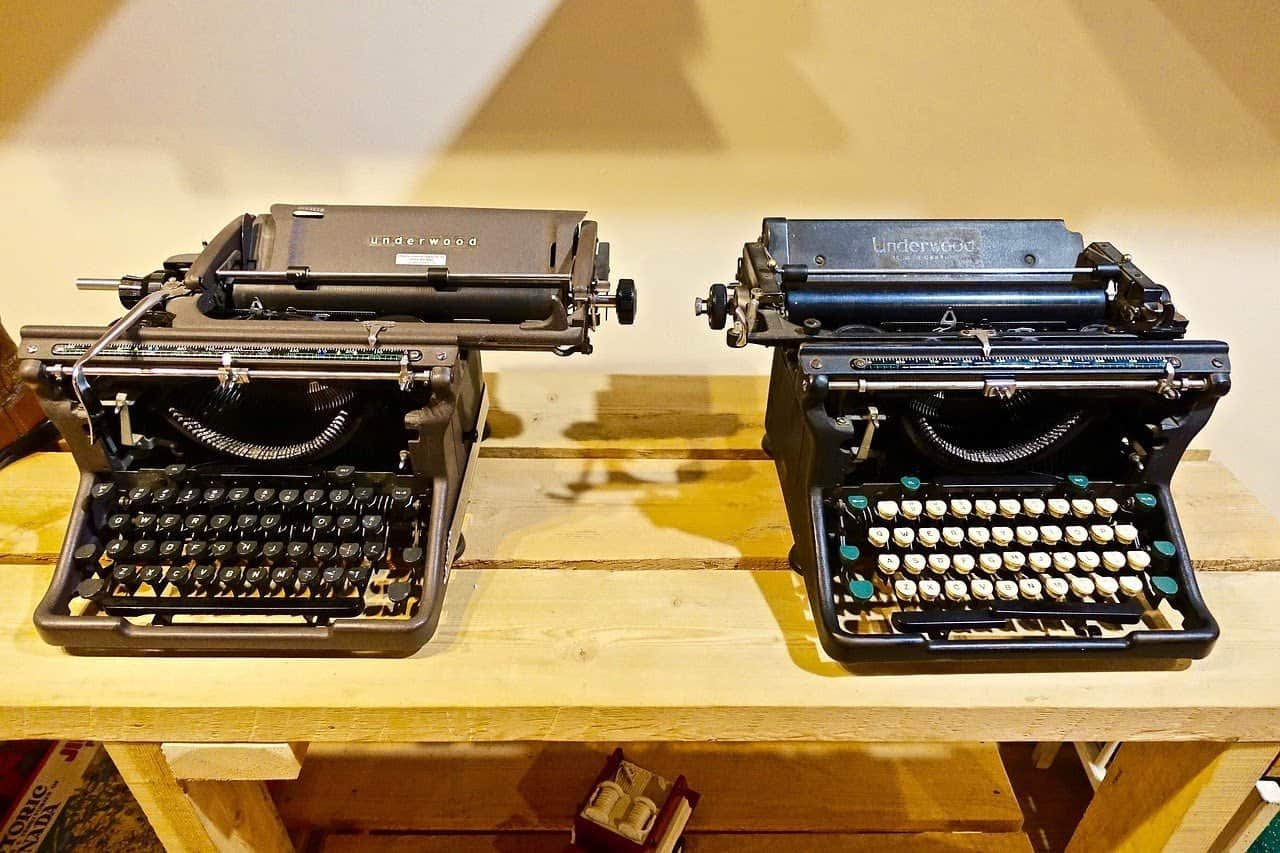 There were over a dozen different models, but the most popular by far were the No. 1 and the No. 5. Underwood typewriters were known for their nearly indestructible workmanship.

However, Underwood also had the forethought to include many other features in their typewriters that eventually won over the market. Today, these machines have huge historic significance and a beautiful classic typewriter design.

They used a typebar design, which was much faster than type wheels, type shuttles, or type cylinders. While the typebar didn’t align the letters on the page as well, they were more efficient.

The front stroke mechanism was revolutionary, because while it sounds obvious, a lot of other typewriters at that time used understrokes. This was called blind typing. You couldn’t see what you were typing as you were typing it. Underwood changed that.

The QWERTY keyboard was awkward at first, but it became a force of habit for the average typist. Underwood was smart to keep this arrangement.

When designing the four-bank keyboard with a single shift key, Underwood was taking speed into consideration first. A lot of other typewriters had a full keyboard with separate keys for each character while index keyboards didn’t have keyboards at all.

Still other typewriters had three banks of keys and two shifts: one for capital letters and one for numbers and symbols. The four-bank keyboard with a single shift key proved to be most efficient for fast touch typing.

While some typewriters used ink pads or ink rollers, the Underwood used ribbon inking. It created clean, neat letters that weren’t blurry or smudged. Ribbons lasted longer and were easier to maintain. 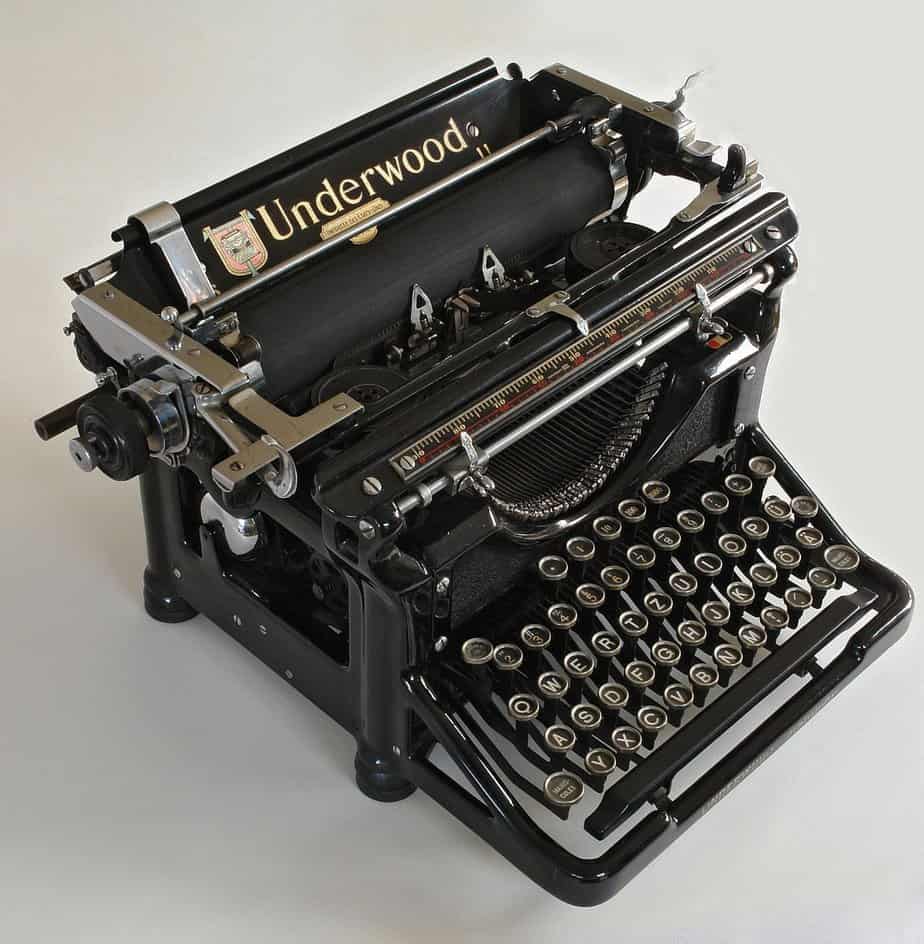 The Underwood No. 1 featured the three most popular design elements of all previous typewriters. It set the standard going into the early 20th century with a straight four-row keyboard, a single shift key that could be depressed from the right or left, and striking type bars on the front so you could see what you were typing.

While the Daugherty included these features in 1893, Underwood did it much more effectively. It was a superior old machine in nearly every way and it zoomed to popularity quickly.

Both of these models were discontinued with the release of the Underwood No. 5 in 1900.

Check out this Underwood Standard Typewriter Model No. 3 in good condition, 20" wide carriage wheel, produced in 1928. 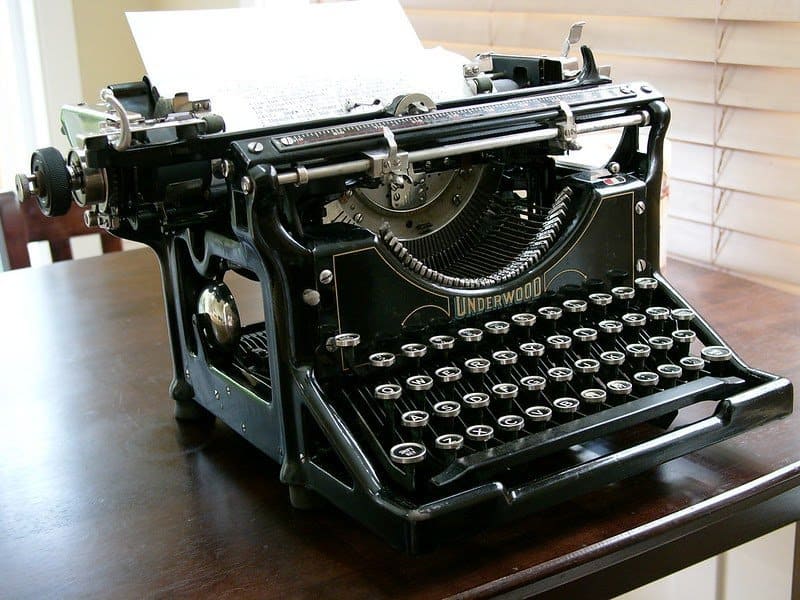 The Underwood No. 5 set the standard for modern typewriters. When it was released, there were hundreds of varying designs and keyboard layouts. By 1920, nearly every antique typewriter modeled the Underwood Number 5.

Between 1900 and 1920, Underwood manufactured nearly five million of this particular model type. Today, they are available on Craigslist, eBay, and other outlets where you can find used and antique items.

Because they’re so plentiful, value depends largely on good condition. They were built well, and many of them still work perfectly. If they don’t, you can typically get them refurbished and back in working order, if you’re willing to pay. A nice antique typewriter from Underwood. This is the no. 5 standard 12" and looks to be in overall fair to good condition.

Check Price Check Price at Etsy
We earn a commission if you make a purchase, at no additional cost to you.

Why Every Typewriter Enthusiast Should Own a Vintage Underwood 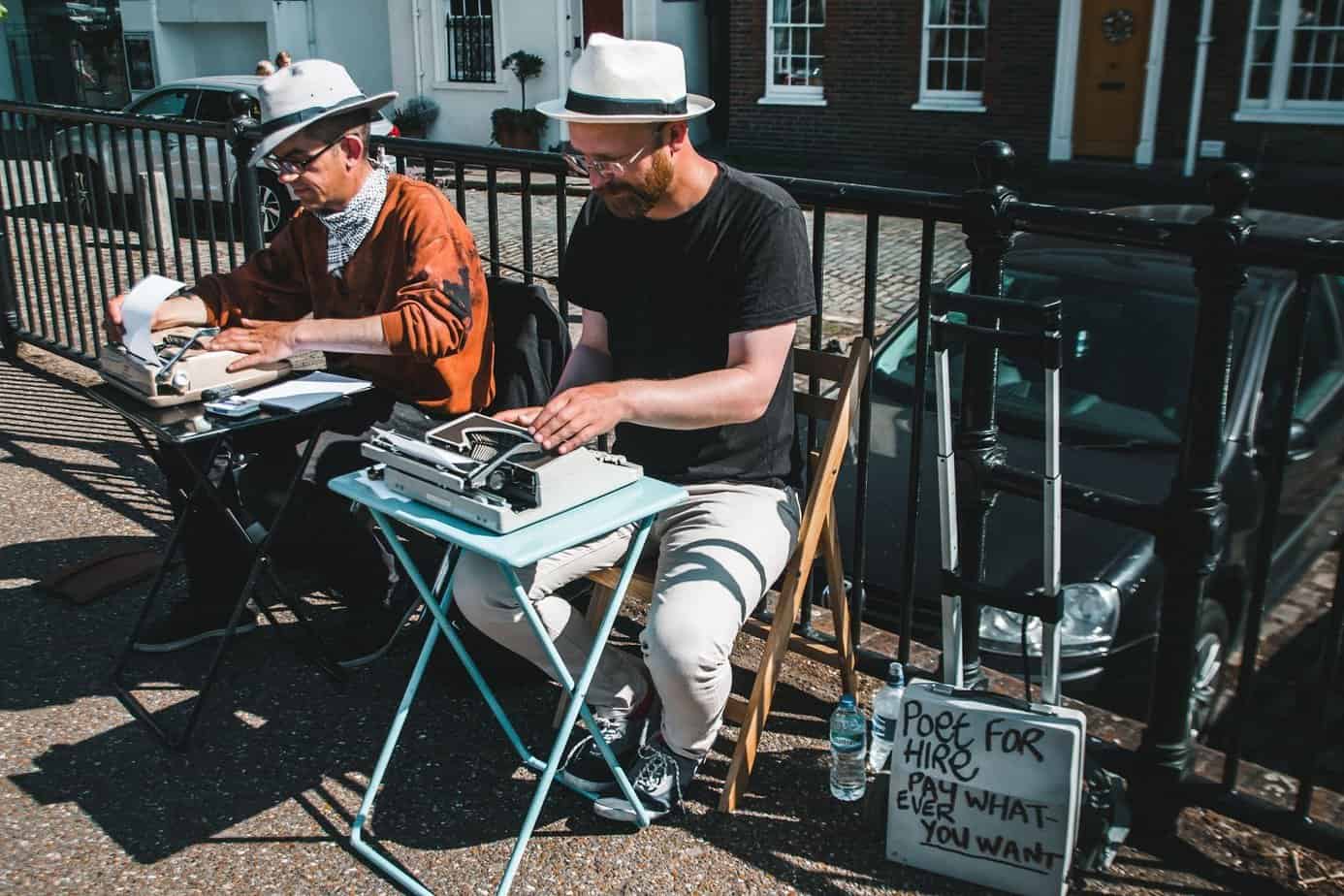 Image by  Andraz Lazic via Unsplash

The Underwood Typewriter Company was one of the most well-known names in typewriter manufacturing for over 70 years. They set the standard for keyboard functionality, typebar design, and front stroke visible typing.

Question: Where is the serial number on an Underwood typewriter?

Answer: You can find the serial number of the vintage typewriter on the right top of its frame, under the right end of the carriage.

Question: Where can I find a ribbon for my typewriter?

Answer: Luckily the ribbon of typewriters are still being made to this day. If you need a ribbon there are several businesses that can ship one to your door.

Question: How does a typewriter ribbon work?

Answer: The typewriter ribbon actually works in a very interesting way. As you type, an ingenious mechanism winds the ribbon from the spool on one side onto the spool on the other.

After the entire spool has been fed across, the tension in the spool will trip a switch and the ribbon retracts in the opposite direction. With time, the ribbon of the machine goes back and forth numerous of times.

Question: What is the smallest portable typewriter?

Question: Who made the Underwood typewriter ?

Answer: The Underwood typewriter was made by John Thomas Underwood.

For antique enthusiasts, avid readers of classic literature, and professional writers, Underwood typewriters hold a special significance. However, these vintage machines should be important to anyone who uses a computer today.

The QWERTY keyboard revolutionized the way we type, and Underwood streamlined and perfected the design. For a collector having an Underwood typewriter is more than having a retro artifact on display in their home. It’s about owning a part of history.

Getting ahold of an old Underwood typewriter of any model that is still in a great condition, is not that hard. It only requires an investment of your time and a little cash and you could own a revolutionary item that changed modern typing forever. What are you waiting for? Get yourself a vintage typewriter today!