Mirror, mirror on the wall, who’s the most stylish one of all? From whimsical, eclectic frames to geometrical, sober designs, the mirror has been redone time and time again. Let’s dive into vintage mirror designs, styles, and more.

Vintage mirror designs and styles have transformed from era to era. Most antique frames were made from gold or silver-gilded wood carved into decorative, sometimes ornate, designs. Each period changed distinct features that set the mirror aside from its earlier counterparts.

Not all vintage mirrors are created equally. While many recognize gold-colored frames with carved curls and beading, you may not know that the original designs were less than glamorous. Keep reading to learn the mirror’s story from origin to ornate! 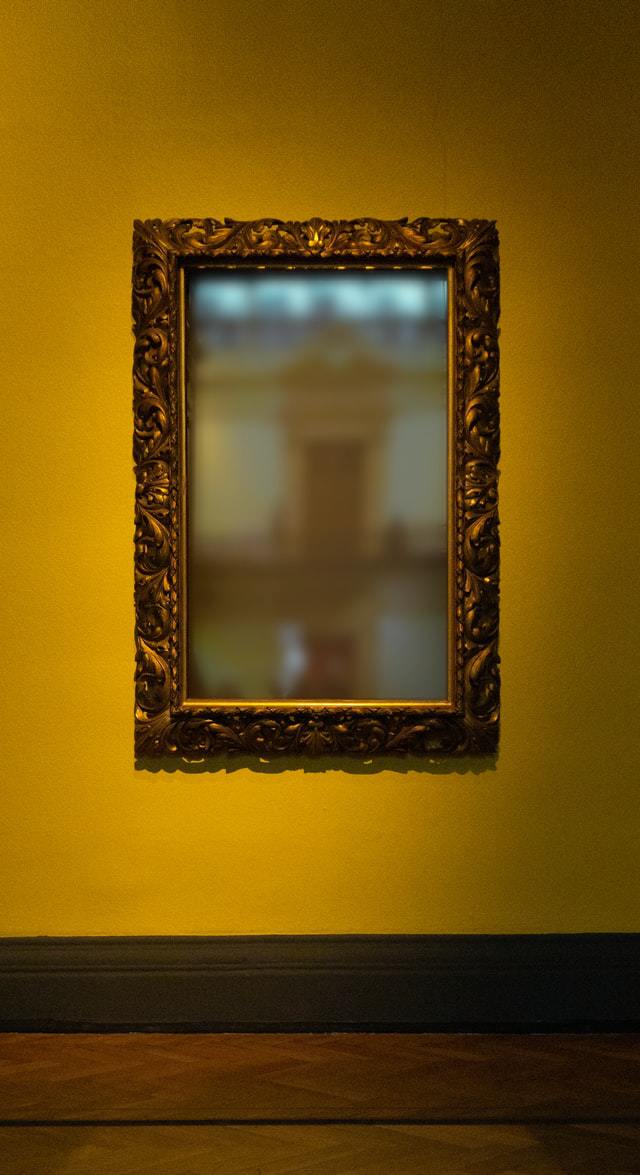 Mirrors have a long, rich (literally) history dating back thousands of years ago. In fact, the first mirrors weren’t even mirrors at all!

Before the idea of glass surrounded by ornate metallic frames came about, people found their reflections in the natural world: ponds. That’s right — it wasn’t just Narcissus glancing at himself in watery mirrors.

Historians date the first man-made mirror back around 6000 B.C.E. in Anatolia or modern-day Turkey. These pieces would be virtually unrecognizable to us, yet they laid the groundwork for the mirrors we know and love.

A few thousand years later, around 3100 B.C.E., Egyptians also began making their own mirrors. One significant difference between these ancient Anatolian and Egyptian artifacts: Egyptians made theirs out of metal.

These pieces still lacked a glass surface. Instead, they were polished until they shined and cast reflections to onlookers just like the original obsidian artifacts. However, Egyptians were the first to attach a handle to the base, taking on the shape of the classic handheld mirror we still see today.

Mirror handles were art in and of themselves. Some were carved to resemble the papyrus plant or a woman’s face featuring cow’s ears, both symbolizing the Egyptian goddess of beauty, Hathor.

Similar mirrors were also made in China out of metal alloys. During these times, mirror-making materials were costly, making them a symbol of wealth and status.

It wasn’t until the first-century C.E, over 6000 years since the first mirrors were formed, that glass became a staple component of these artifacts.

Historians believe glass mirrors were first created in Sidon, modern-day Lebanon, and became increasingly popular in Rome. They were made of spherical blown-glass, which was then coated in lead or mercury (something we would never do now) and broken into curved pieces.

In the 1500s C.E., Venice became a hot-spot for blown-glass mirror production. Still, the cost was sky-high, and mirrors were considered a luxe item.

While the reflections were indeed clearer in glass than polished metal, these mirrors were tiny and produced a distorted reflection. That’s not exactly what you want in a mirror.

It wasn’t until 1835 when European chemist Justus von Liebig discovered a technique to coat one side of a glass piece with silver that the modern mirror came to be.

Von Liebig’s method was much more cost-effective than any previously manufactured mirrors. Finally, mirrors became increasingly accessible to the masses. 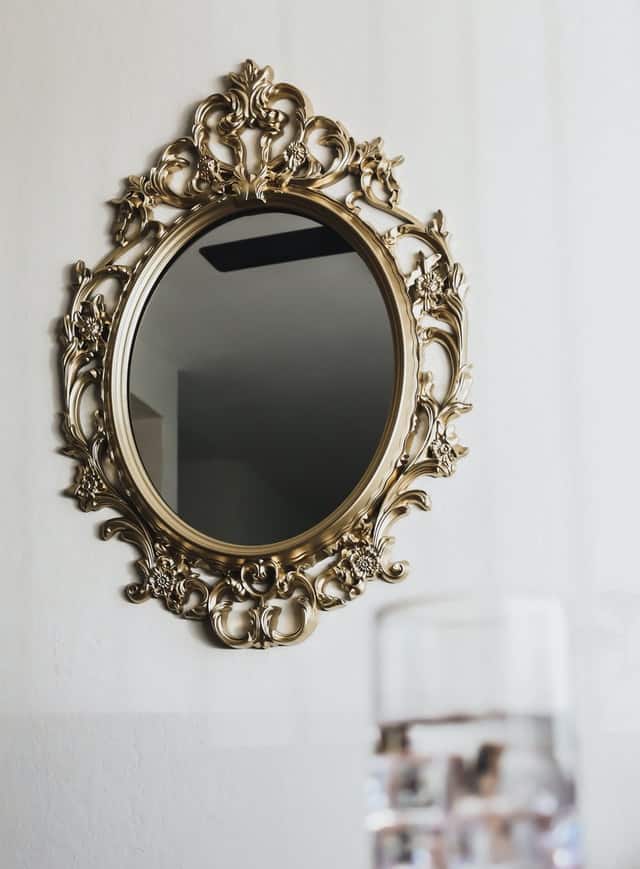 Vintage mirror frames tend to be significantly more intricate, ornate, and artful than pieces you’d buy at a big-box store today. While mirrors have obvious functionality, they can be focal points or statement pieces too. Vintage style frames certainly are.

These frames were traditionally carved from wood, sometimes with added gesso or even wire detailing. A layer of gold leaf gives these mirrors their regal edge.

Gothic mirrors were styled similarly to church windows. Imagine an oval-shaped mirror surrounded by an arched frame coming to a point at the top. These mirrors were typically made of darker woods like oak or walnut and included intricate carvings and scrollings.

The Gothic era lasted from the 12th to 16th centuries, and these mirrors reappeared as Victorian Gothic during the 19th century.

If you’ve ever visited the Hall of Mirrors in France’s Palace of Versailles, you’ve seen Baroque-style up close. This era was filled with grandeur and extravagance.

While Baroque frames were not carved quite as intricately as Gothic pieces, they don’t sacrifice luxury. Vintage Baroque mirrors often featured ornate molding and distinct symbols, including flora, fruits, and angels.

These 17th-century frames can be covered in gold or silver and include ebony or tortoiseshell embellishments.

Unlike its predecessors, Rococo-era mirrors took on a more simplistic look — well, kind of. The Rococo style encompassed a more playful look than the sheer extravagance of the Gothic or Baroque periods.

Mirrors of the time included more delicate work featuring plants, birds, and vines concentrated mainly at the top. The golden frames were often asymmetrical and had whimsical curls, scrolls, and beading throughout its body.

Many Rococo mirrors were rectangular, while some took on the cathedral style: oval-shaped but flat-bottomed.

If you think you may have stumbled across a Rococo-era mirror, turn it around. Several of these mid-1700s pieces have painted backsides — talk about whimsy!

Unlike the flashy designs of mirrors past, the Georgian style took a much calmer, reserved path. There were minimal carvings through the bodies of these frames. The few decorative pieces they possessed were centralized to the very top. These included more concrete stylings like musical instruments, vases, and flowers.

You can find columns and medallion-looking decor on these mid to late 18th century frames. Neo-Classical mirrors were gold or silver in color and either rectangular or cathedral in shape.

Early 19th-century mirror designers added on to the previous simplistic styles but added their own flare. Architecturally-inspired columns and friezes mixed with natural elements like florals and leaves to decorate these gold-gilded mahogany frames.

Regency-era folks swapped rectangular-shaped pieces for oval ones. Frames themselves in this era were also slimmer than past models.

Charming French Trumeau mirrors may have been much less elaborate than many of their counterparts, but that doesn’t make them any less remarkable.

These mirrors are more geometric than some of the free-flowing, curly frames we’ve seen in the past. Trumeau mirrors incorporated a boxier silhouette with rigid bevels, panels, and columns.

Looking for something to fill that space above your fireplace mantel? Trumeau mirrors were made for this — literally!

Looking to further your knowledge on the history of mirrors? Maybe you have a piece you need more help identifying? Check out these helpful resources:

Mirrors have a rich, fascinating history dating back over 8,000 years ago. Before these pieces even came to be, people gazed at their reflections in still bodies of water. The first human-made mirrors consisted of polished stone. Then, they were formed from pieces of blown-glass before the modern mirror was developed in the 1800s.

As the mirror evolved, it went through many distinct styles and designs, including:

Vintage mirror frames were traditionally carved from wood coated in silver or gold-leaf. Which style is your favorite?