Perhaps we take the pattern from granted now, but polka dots actually have a very interesting history.

In Medieval Europe, the pattern was initially seen as very unpleasant, representing disease and impurity. Meanwhile, in Non-Western cultures, dots are viewed as symbols of male virility and magic.

So how did the pattern go from taboo to “teenie weenie yellow polka dot bikini”?

Read on for the fascinating history of polka dots!

During the Medieval period in Europe, wearing dotted fabric was considered taboo. The technology to create uniformly spaced polka dots did not yet exist. Without the help of these machines, the only dotted fabric produced featured unevenly spaced dots.

These semi-random dots were reminiscent of rashes caused by a number of extremely contagious diseases, such as smallpox, the Bubonic plague, and leprosy.

These diseases were so rampant at the time, that Medieval Europeans couldn’t help but be subconsciously reminded of these fatal illnesses.

This negative association with spotted fabric continued through the Renaissance.

In Shakespeare’s Othello, Desdemona’s spotted handkerchief leads to tragedy in the play. Dots weren’t the only taboo patterned fabric, however.

Stripes also had negative connotations, and were considered the pattern of outcasts.

On the other hand, dots have had much more positive connotations in non-Western cultures.

The pattern often represents magic and male potency. Many African art and costume traditions feature different types of dots in a variety of sizes and colors.

For example, the Lega people of Western Africa hold a rite of passage in which a young man, painted in white dots, knocks persistently on a polka-dotted door until it opens.

Dots are also seen in Buddhist, Hindu, and Islamic designs.

The Polka Dot Craze of the 19th Century

Before they were called polka dots, dotted fabrics in Europe went through many different names.

Raised dots on tulle were called Dotted-Swiss, the French had quinconce for the dots on a die, and the German had Thalertupfen for the Thaler coin.

In Spanish dots are called lunares, or “little moons”.

The modern term “Polka Dot” comes from the polka dance craze that swept through Europe in the mid-19th century.

No one is really sure where the word “polka” comes from, though there is some evidence that it refers to a Polish woman, although the dance itself is Bohemian in origin. Others believe that the word comes from the Czech pulka for “half”, in reference to the dance’s small steps.

While the connection between the dance and pattern isn’t clear, it’s thought that the pattern evokes the cheerful, light nature of the dance. Europeans were absolutely crazy about the polka, much like the Charleston of the 1920’s or the Macarena of the 1990’s.

Clever businesses took advantage of “polka mania’ and began manufacturing different types of polka-themed products. Many “polka” items came from the European polka craze of the 1840’s, including the polka hat and polka jacket, but only the polka dot (and the dance itself) seems to have stuck around.

The term “polka dots” to refer to a spotted fabric first appeared in print in 1857 in Godey’s Lady’s Book, a Philadelphia-based women’s magazine of the time period.

Around the same time, the Los Angeles Times advised stylish readers to invest in the polka dot fashion trend for the 1940 spring season. “You can sign your fashion life away on the polka-dotted line, and you’ll never regret it this season,” the publication wrote.

The song tells the story of a curvaceous young woman in a dotted bikini, who hides in the water rather than revealing her body in her “teenie” swimsuit. Soon, every woman wanted to be seen in polka dots. 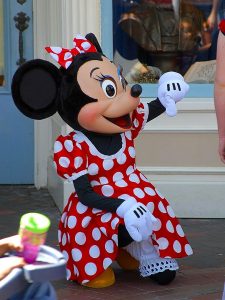 In 1961, Disney debuted a new polka dotted outfit for Minnie Mouse. The next year, DC Comics debuted a new Batman villain called Polka Dot Man. Polka Dot Man formed weapons from the polka dots he wore with the press of a button. While it seems like a strange concept, the character highlights how trendy polka dots really were!

Polka dots continued to enjoy popularity throughout the rest of the 20th century.

Fashion designer Carolina Herrera is often associated with polka dots, as many of her designs in the late 80’s and early 90’s were covered in polka dots.

In the 1980’s, polka dots began to be associated with Rockabilly counterculture, which pays tribute to American Rock and Roll and pinup culture of the 1950’s.

The peak popularity of the polka dot from the 1940’s and 1960’s in America is what gives the pattern its retro connotation today. The polka dot pattern is seen on many vintage-style items, like bow ties, swimsuits, dresses, and blouses. Polka dots are seen in stores and on e-commerce sites every year, particularly for the spring and summer seasons. 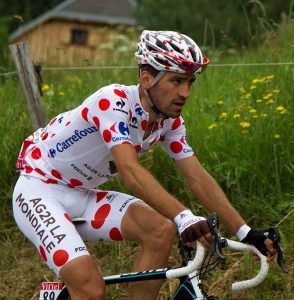 The polka dot even pops up beyond the realm retro-inspired fashion.

During the Tour de France, the leading cyclist in the mountains wears a polka dot jersey. The polka dot also appears in art, most notably in Yayoi Kusama’s works.

If you are looking to purchase polka dot fabric for a project, here are some great online sources to consider: Find the perfect polka dot fabrics for your DIY project at Amazon.com.

Buy products such as Treasures from the Attic, Medium Polka Dot Fabric - Multicolored at Walmart.