The 19th Century and Victorian Age (1837-1901) was a period of great technological advancement in transportation, communication, and many other aspects of life. People were inventing things all over the place.

There were, though, some inventions that never quite took off.

The Science Photo Library has a wonderful collection of original patent designs from the time; things like eye protection for chickens and a swimsuit made from corks. You can view photos of the patents on the Library’s website.

You can also view original patents with images just by searching the Google patent database.

Here’s a short list of some of the more interesting and bizarre inventions that never really made it off the drawing room floor (so to speak). 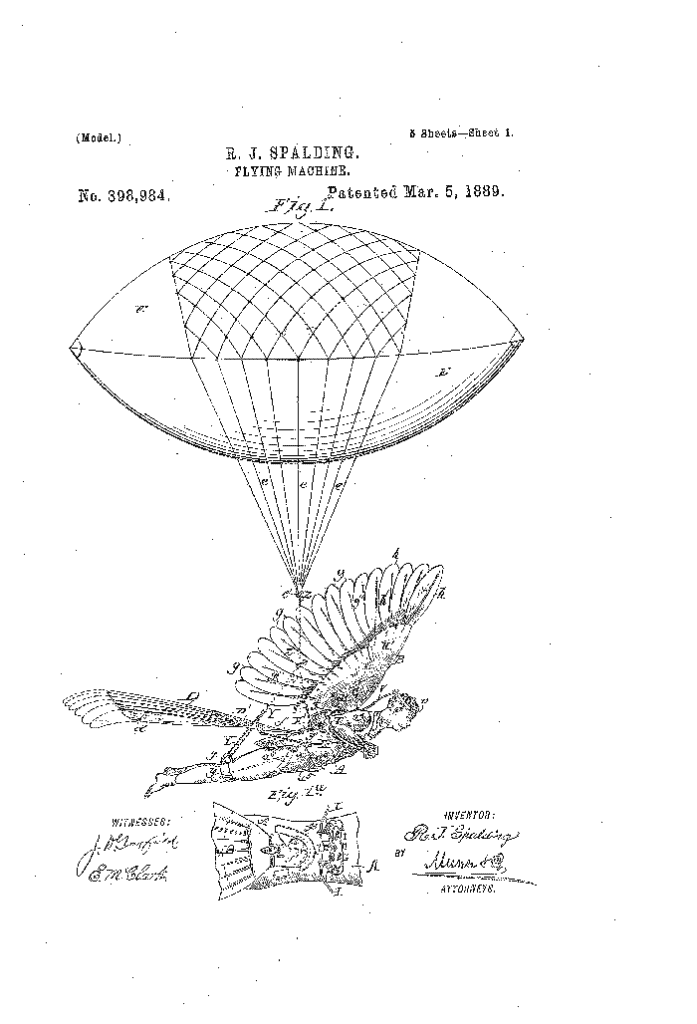 Rueben Spalding designed this device to allow a person to fly by using a balloon and wings.

The wings attached to your back, while a balloon extended from tethers connected to your waist, chest, and legs.

The wings could be moved in a flapping motion by pulling on strings attached to your arms. It is not known if a full scale version of the device was ever created, 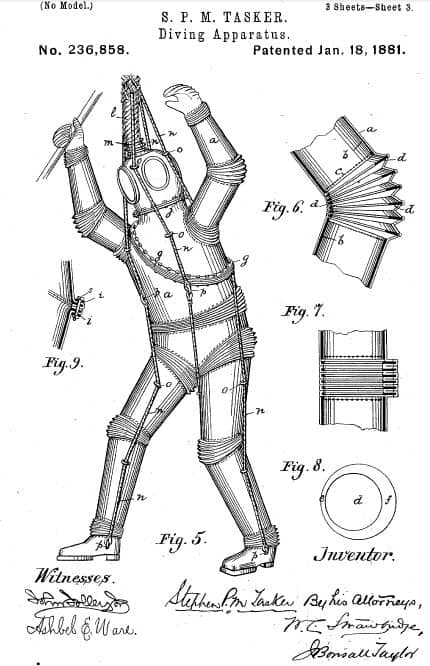 Stephen M. Tasker designed a diving suit made from metal.

The suit had movable joints that allowed the wearer to freely move their arms and legs. It was also meant to withstand the pressure of diving in water.

A central tube provided an in-out flow of air. The entire suit was lowered and raised into water by a rope harness. 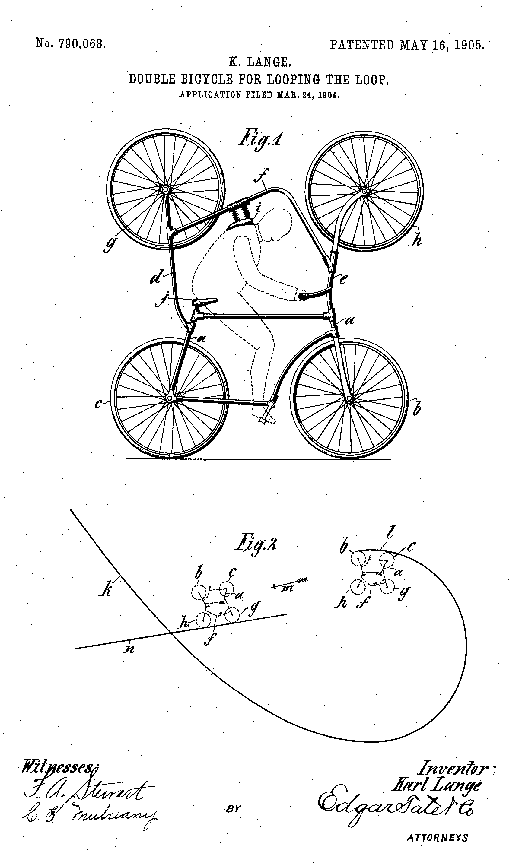 The double bicycle was two bicycles attached by their head tubes and a tube that extended from the seat of the ‘bottom’ bicycle to the back wheel of the ‘top’ one.

The top bicycle had an apparatus that rested on the upper back of the rider.

The device was designed to perform loop the loop stunts at circuses. 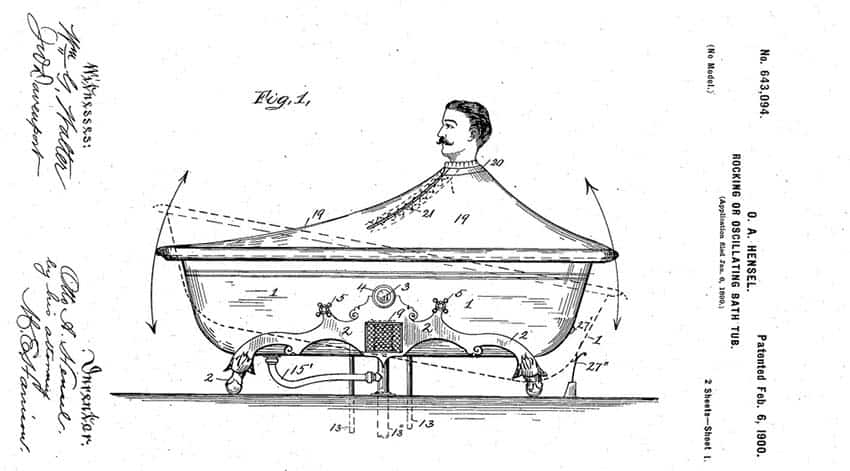 Victorians were really into water therapy, known as hydrotherapy. They believed that such therapy could cure a large variety of ailments.

This bathtub, designed by Otto A. Hansel, rocked forwards and backwards, causing water to splash against the bather. A top cover prevented water from spilling out onto the floor. 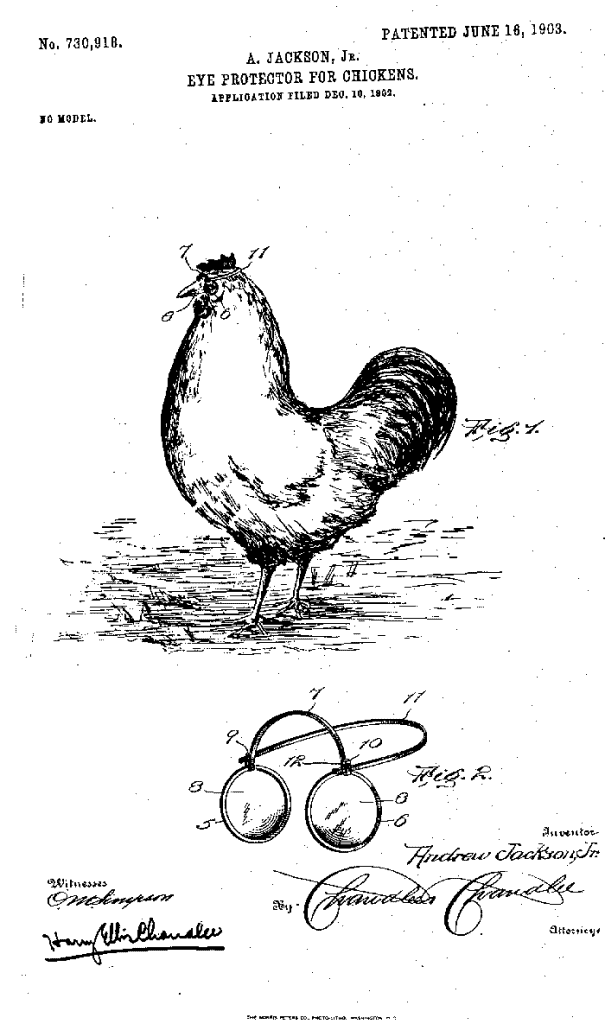 Andrew Jackson, Jr. was apparently tired of his chickens getting their eyes pecked at so he invented these stylish and protective eyeglasses for them.

Two round pieces of glasses were fitted on a back strap and a top strap that fit snuggly over the chicken’s head. 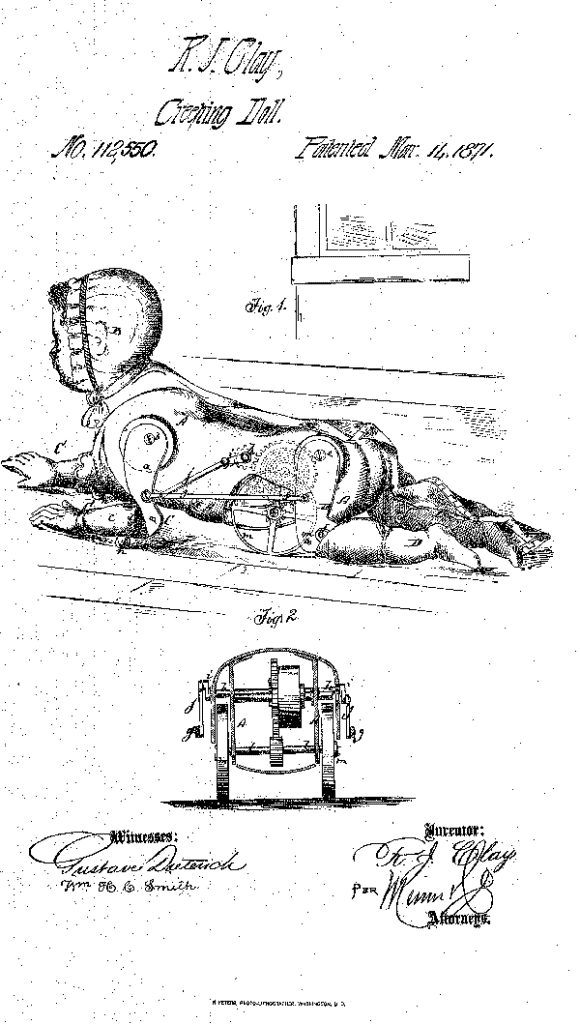 The creeping (or creepy!) doll was a ‘toy’ designed by Robert J. Clay. When wound up the doll would creep along the ground on wheels.

The doll’s limbs would also move in the same way as an actual, live crawling baby’s would move. 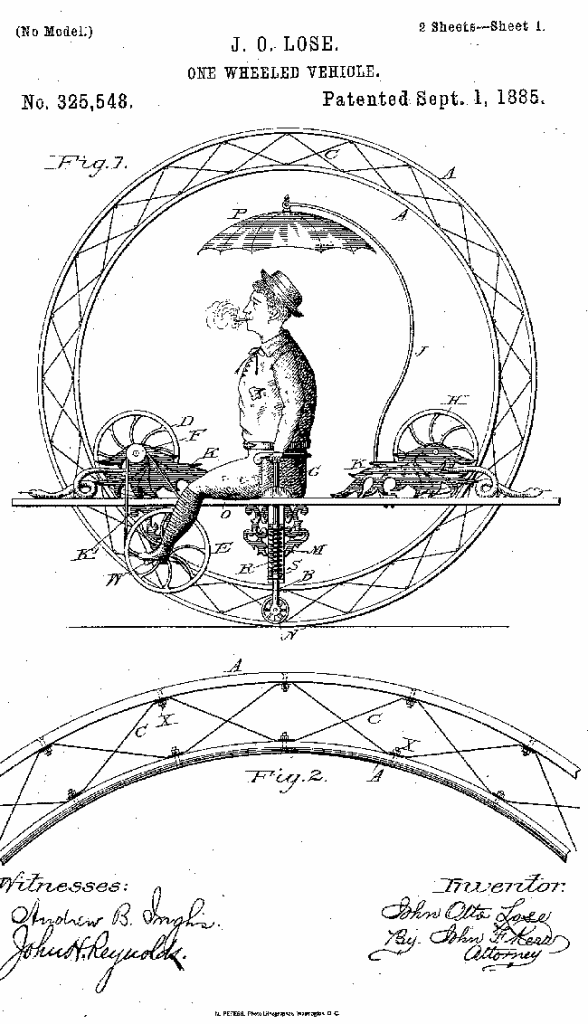 This one-wheeled vehicle, invented by John Otto Lose, was a sort of a unicycle but more like a tricycle inside a unicycle.

The rider sits inside a spokeless wheel and operates a tricycle that rolls along the outside rims of the much larger wheel.

The unicycle/tricycle also included an umbrella. 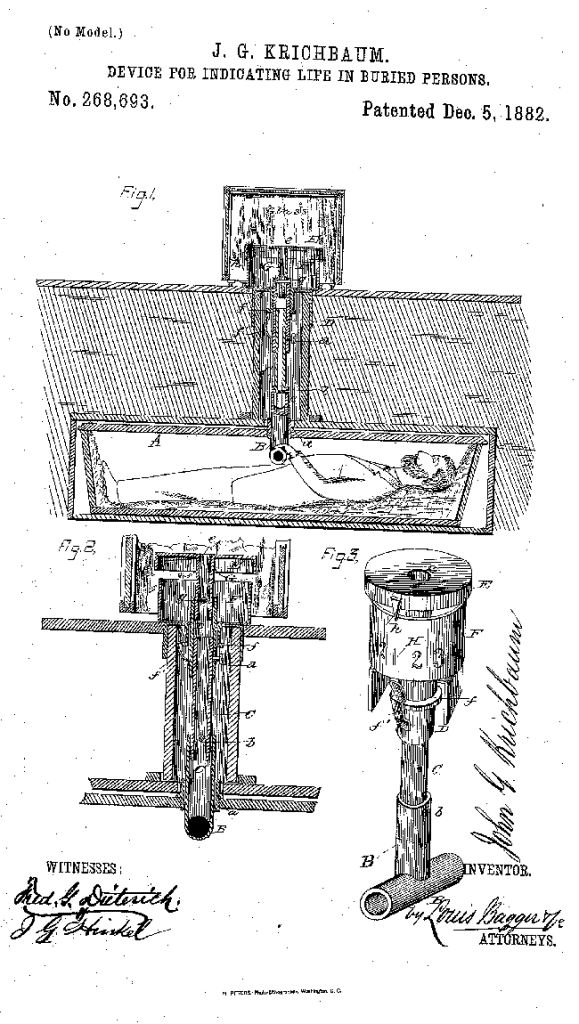 Medicine was not yet as advanced in the 19th century as it is today and there were enough unfortunate incidents of people being buried alive that John Krichbaum designed a device to save a person from unintentional live burial.

A person inside the so-called ‘safety’ coffin could rotate a set of handles.

These handles were connected to a periscope device while a dial visible above the surface revealed the movement.

The handles could also be pushed upwards to allow air to enter the coffin. There are no known reports of such devices actually saving an accidentally buried person. 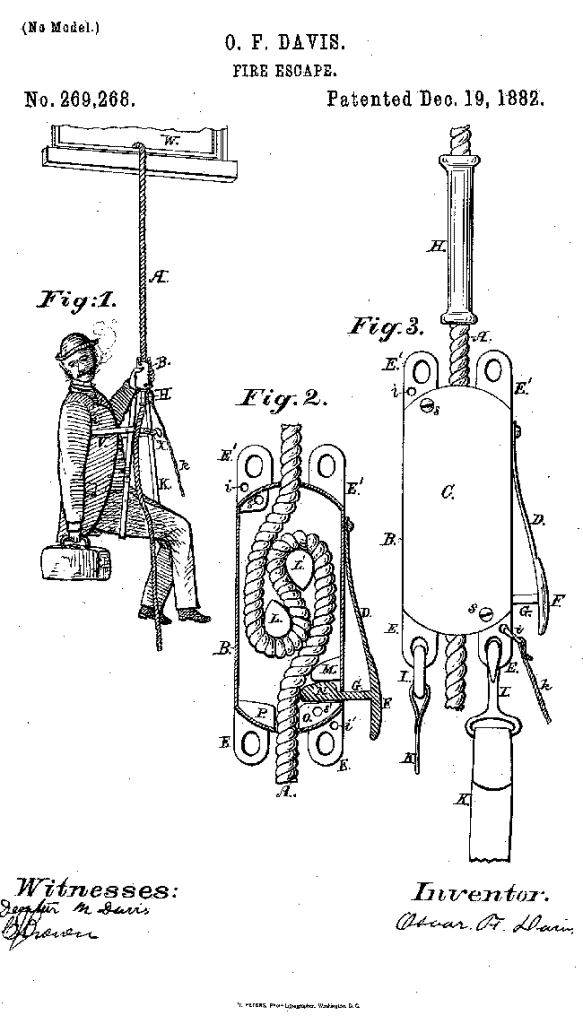 This device, designed by Oscar F. Davis, was essentially a flat piece of wood you could sit on attached to a rope and pulley system that allowed a person to control the speed of descent. 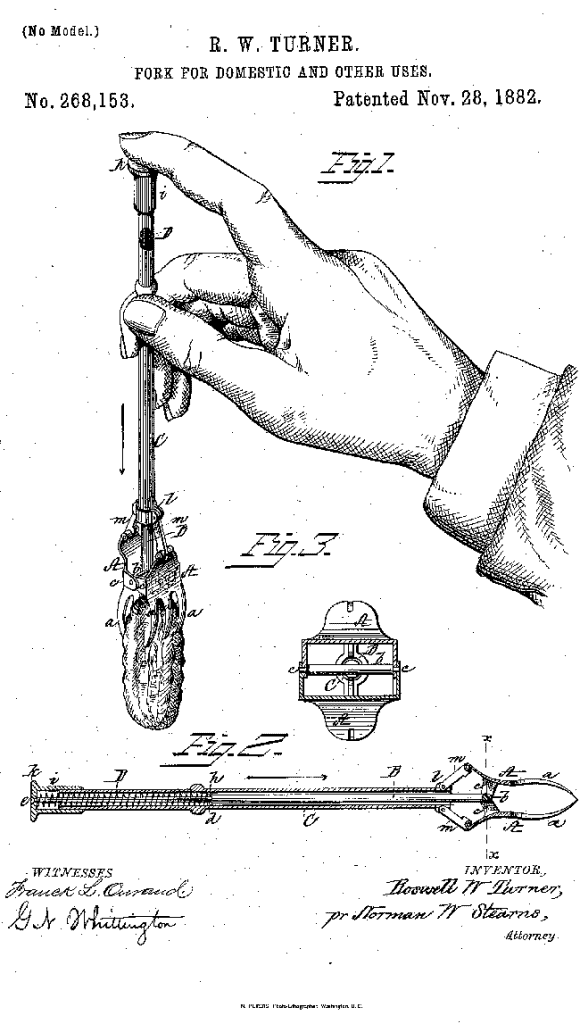 The spring-operated grasping fork, invented by Roswell B Turner, was designed to grasp difficult to retrieve food items, such as slippery gherkins, from jars – kind of like modern day tongs, except that the ‘claw’ or grasping part of the mechanism was at the very end of the fork. 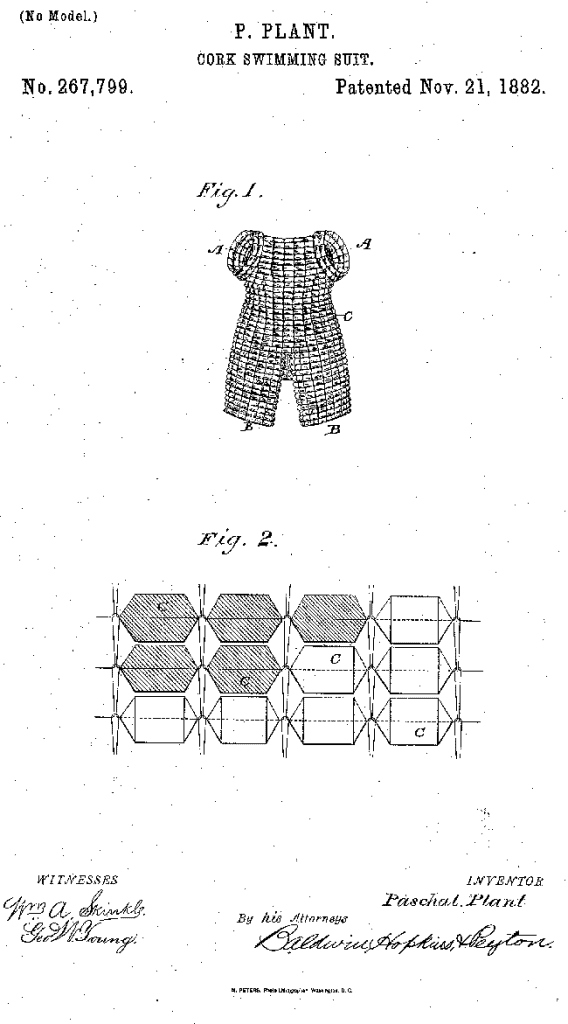 Pashal Plant, apparently concerned about people who weren’t very good swimmers, designed a swimsuit made from corks attached to a mesh or netted base.

Corks are buoyant by nature so a suit made from them would allow the swimmer to float on water.

There are also patents for a ladder gripping device you attach to your boots, a jack-o-lantern helmet, and a smoke excluding mask.