Blown glass is a risky craft — you are working with molten glass after all — but did you know there was a time when artisans could be killed over it? Or did you know that this famously Italian craft isn’t even Italian at all? If these facts shocked you, it’s time for you to read up on the history of glass blowing.

The history of glass blowing starts in Syria, where the technique of blowing into molten glass was invented. The craft then boomed in Italy before well-kept secrets of Venetian glassworking methods spread across the world. Blown glass artisans began to shift away from functionality in the 1960s.

Once upon a time, glass was a highly inaccessible material for everyday folk. Since then, it’s transformed from a coveted material to a creative medium — it was even purely utilitarian for a while. Keep reading to learn all about how the historical journey of glass.

All About Blown Glass 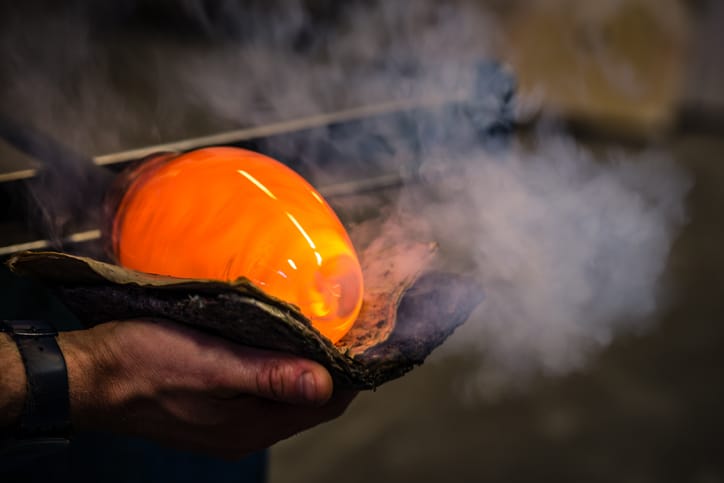 You may think that blown glass pieces are for aesthetics only — decorative glass animals or pricey flower vases. But that’s not the case at all.

While there’s no doubt that glass blowing is an art form, it has practical, utilitarian uses too. In fact, so long as you have working light fixtures anywhere in your home, you have blown glass all around you! That’s right — light bubs are household examples of this craft.

Blown glass has significantly changed since it was first invented — which we’ll get into shortly. Glass is commonplace these days. We use blown glass daily, from wine glasses to perfume bottles to window glass and everything in between.

However, it’s not always the handcrafted work of a glassman like it used to be. Little of it is! So what is this lost art all about anyways — and is it lost at all? 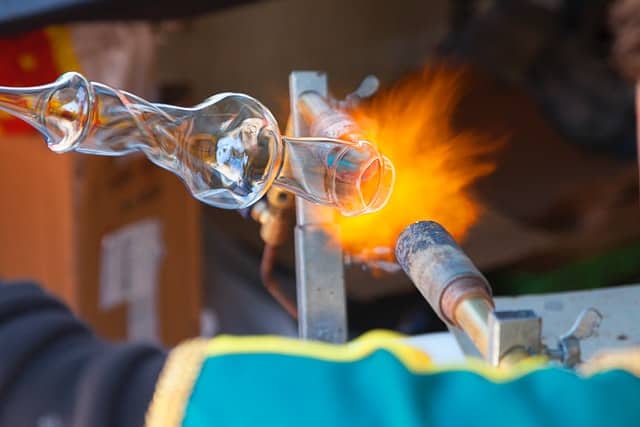 Glassblowing is a craft that involves heating glass to remarkably high temperatures causing it to become molten. Once it’s liquidy enough, other materials like metals are added into the mixture to make the glass easier to work with.

Craftsmen (one or multiple) then dip a tool called a blowpipe into the hot glass and blow into the tube. The glass begins to bubble, just like an inflating balloon. Glassblowers can add more layers to the piece by dipping it back into the mixture or attaching more with an instrument called a gathering iron (used to gather more of the molten glass, as the name suggests).

While the actual blowing of glass is a staple part of the process, it doesn’t end there. The industry wouldn’t be as renowned as it is if all you could create were glass bubbles. So, the next step is to shape the piece.

Various tools such as marvers, blocks, jacks, and tweezers all help work and form the glass into its desired shape. Of course, the craftsmen need protection from the glass’s extremely high heat, so paddles and heat shields are used to create a barrier between the artisan and the piece.

Before the work is complete, artisans can add smaller pieces of glass, colorants, or decorative threads.

Since the glass needs to remain at incredibly high temperatures for it to be workable, sometimes it cools down too much before the piece is complete. In this case, the glass is inserted into a furnace called a glory hole to warm it back to a workable temperature without compromising the shaping that has already taken place.

Ironically, the finished glass piece needs to enter another furnace to cool it down. Seem contradictory? Well, it is — but there’s a logical explanation. If the glass cools too quickly, it may crystallize or break. Keeping it in a furnace offers the necessary temperature control to maintain the glass’s integrity.

After the piece is fully set, it can be ground, polished, or engraved to add an extra dimension to this already intricate and stunning craft.

Related: What is Cranberry Glass? A Collector’s Guide

The Invention of Blown Glass 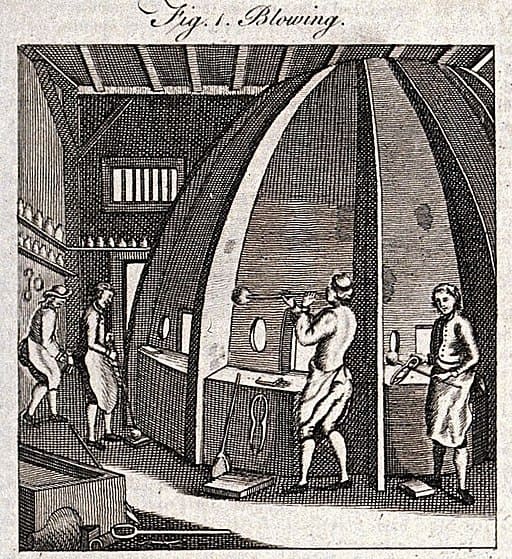 See page for author, CC BY 4.0, via Wikimedia Commons

Since the crafting process was so lengthy, glass pieces were dedicated to the upper-class.

When a Syrian craftsman realized they could inflate molten glass with a blowpipe in the 1st century B.C.E., everything changed. Production quickly ramped up, and Syrians were soon exporting blown glass goods across the Roman Empire. They also set up workshops across the east in modern-day Lebanon, Palestine, and Cyprus.

Glassblowing techniques began to improve, but the fundamentals remained the same. These new glassworking methods sparked creativity, and the craft continued to spread.

Once glassblowing reached Italy, they grabbed hold of the craft and monopolized the industry. Italians dominated the market and didn’t take their work lightly — at all.

Italian glassblowing was so renowned throughout the Middle Ages that that country’s government mandated all glassblowers to move to Murano, an island near Venice, to maintain their trade secrets. If any craftsman tried to leave, they could be sentenced to death. Somehow, a few escaped, leading to a rise in glassblowing through Asia and other areas of Europe.

Any blown glass collector will highly cherish a piece crafted in Murano during this boom. If you ever visit Venice these days, you’ll notice that blown glass is still closely tied with their culture.

Despite the strict (and need we say controversial) efforts of the Italian government, all of the best-kept glassblowing secrets were revealed to the world in 1612 when Antonio Neri — an alchemist, priest, and glassmaker — published L’Arte Ventraria or The Art of Glass. Just like that, all of the protected Venetian knowledge was available to anyone.

When England colonized Jamestown, Virginia, in 1607, they set up America’s first glassblowing shop to aid the economy. The plan was for glassblowers in Jamestown to produce jars and bottles, among other glass accessories. Then, workers would send the profits to those who settled the area.

It didn’t go according to plan, though. The first glasshouse wasn’t profitable, so Jamestown set up another 15 years later. Again, they ended up with the same results.

Early Jamestown glasshouses may have failed, but they paved the way for Americans to take up the craft in the future.

Some 200 years after the first glasshouses came and went in Jamestown, the glass industry began to thrive in Pittsburgh, Pennsylvania. Benjamin Bakewell owned and operated the only American factory producing cut and engraved glass — and they were good at it.

Under a quarter-century after the facility opened its doors, John P. Bakewell was granted a patent for mechanically pressing glass. While they weren’t producing blown glass, this process was a turning point in glass’s history. Suddenly, it became mass-produced and affordable for people everywhere.

While glassware was spreading rapidly across the United States, 20th century Europe was taking a different route.

Functionality was always the driving force behind glassworking, but when artists took to private studios instead of factories in the 1900s, creativity soared. Glassblowers were finally able to treat their craft as the artistic medium it was. 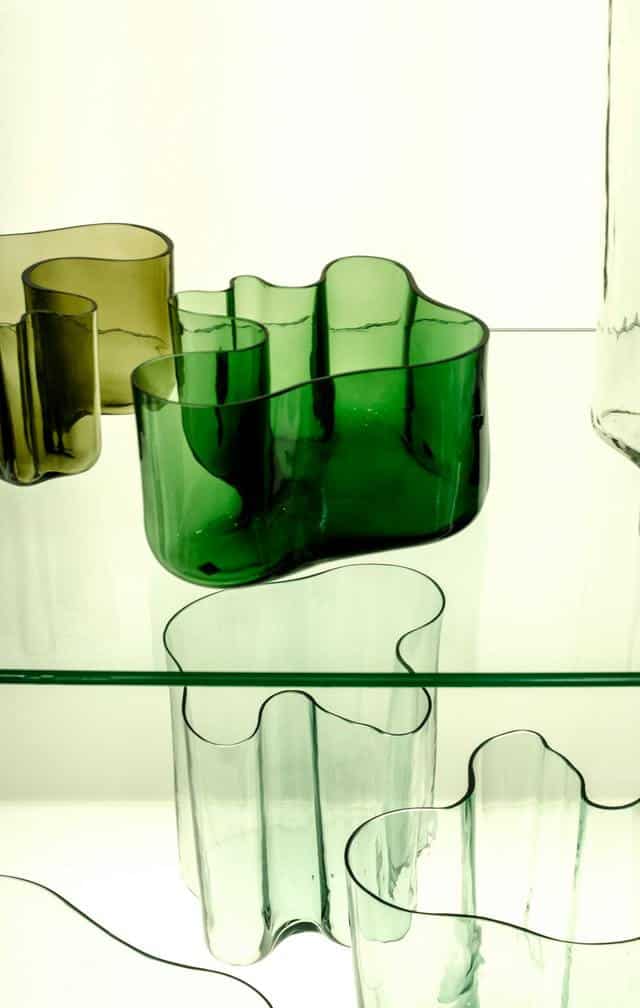 Though glass was already established in the United States thanks to Bakewell’s revolutionary new process, it wasn’t until the 1960s that glass was treated as an art form worldwide. The community began to grow, and studios popped up around the globe. From carving to casting to blowing, glassworkers finally became recognized as artists — a well-deserved title.

Today, the glassworking landscape is still continually evolving and likely always will.

Unfortunately, most of the glass objects we use daily are the work of a factory, not an artisan. Now, machines exist to mass-produce glassware, making them cheaper and more accessible than ever before.

Still, if you look hard enough, you can find genuine glassblowers near you. Check out local studios and galleries to get your hands on some handmade pieces.

If you’re interested in learning more about the history of glass blowing, take a peek at any of these informative resources:

Blown glass is a historically delicate and potentially dangerous craft due to the proximity to scorching molten glass — and the risk of being killed if you shared trade secrets if you were an Italian artisan during the Middle Ages.

While blown glass was invented in Syria, it’s most famous in Italy, where Venetians monopolized the market for years. Over time, methods spread across the rest of Europe, America, and Asia. Nowadays, blown glass has shifted away from pure functionality, and the craft is widely recognized as an art form.