Ice cream – to many it brings back memories of warm summer days. Today, it’s available in grocery stores, restaurants, and specialty shops. But, at one point, it wasn’t. It was often a treat for the rich or was devoured by a few only once a year.

During its beginnings, many experimented with ingredients and made some fascinating possibilities, some of which are no longer made.

This post will explore more about the history of this delicious confection and some interesting ice cream flavors.

How Ice Cream Was Made 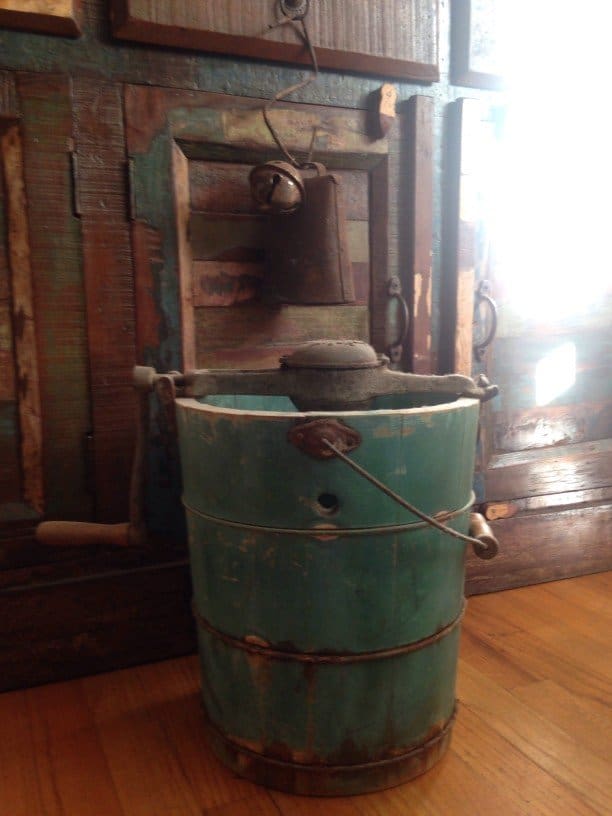 Ice cream as we know it is slightly different from that of centuries ago. Because sugar wasn’t widely at hand, most ice cream was flavored with honey. Rather than using milk, ice cream was generally made with ice chunks. This made it resemble sorbet. It wasn’t until a few centuries later that the invention of refrigeration would help make ice cream a bit creamier.

While the origin of ice cream varies, its first written recording was back during the Tang Dynasty. Chinese emperors would eat a milk product (usually from a goat or buffalo) that was mixed with flour.

During the Roman Empire, officials would request that snow be brought down from the mountains so they could blend it with a sweet item.

As this delicacy became more available, inventors looked for a way to help people easily produce their own at home. In 1843, the ice cream churn hit the market. By putting salt into a pewter cylinder, people could turn its handle to mix the liquid inside.

While a useful creation, it was a time-consuming process. To cut back on manual labor, electric machines started appearing in the 1950s. All you had to do was freeze the container, pour the sugary substance inside, and then press a button to activate its electric motor.

America’s Obsession With Ice Cream During the 1920s

The U.S. had a specific craze for ice cream during Prohibition. Because liquor was banned under the Volstead Act, many needed an outlet to enjoy and turned to ice cream. In fact, many breweries ended up making ice cream to stay alive. Patrons would stop by to grab a few scoops to ease their cravings. Thanks to mass-production, ice cream could be quickly made for customers to indulge their sorrows in. 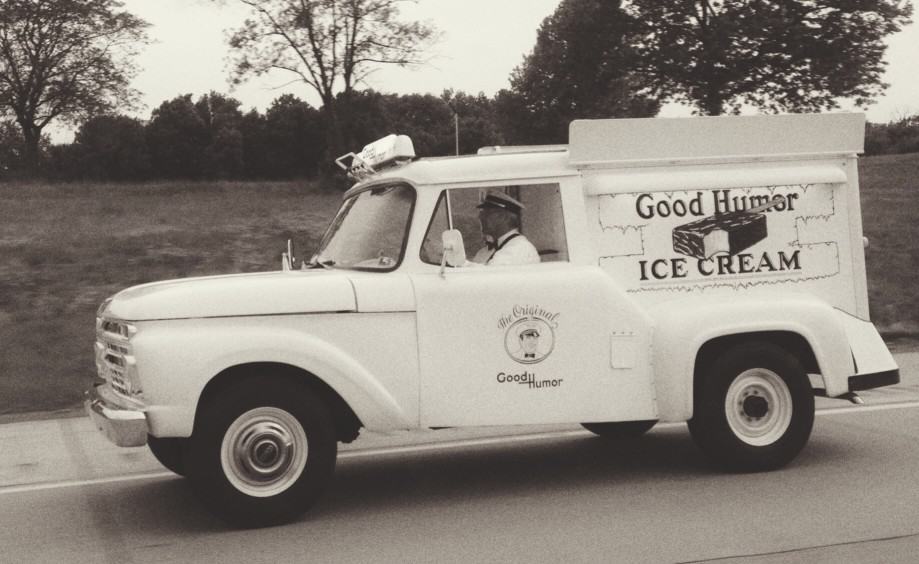 While the obsession slowly declined once Prohibition ended, ice cream remained a sought-after dessert for many.

Eating ice cream was considered a social event, especially during 18th-century America. Most early ice cream socials were hosted by high-level officials, like Thomas Jefferson, because they could afford such a luxury.

In many places, small ice cream gardens were built. Not only could people order their favorite flavor, but smell fragrant flowers and listen to music while they did so.

Once ice cream became more obtainable in the late 1800s, everyone started hosting their own socials. These allowed others to enjoy this dessert but without the hefty costs of keeping up the quirky gardens. Besides being an event where people could converse and share the latest gossip, they served as fundraisers for schools and churches.

During the 1800s, Agnes Marshall was a famous cookbook author who specialized in ice cream. Commonly called the “Queen of Ices”, Marshall examined different flavors and attempted to improve ice cream machines. In 1885, she received a patent for a device that froze the liquid in less than five minutes.

Marshall also wrote of unusual ways to display ice cream. She included recipes that cooks could use to mold ice cream into various shapes, like beehives and pineapples.

Throughout her life, she hosted classes and wrote countless cookbooks. While a few are no longer available, her most iconic one, The Book of Ices (now changed to Ices and Ice Creams) still is.

To eat ice cream, most of us reach for a spoon. However, this wouldn’t have been considered acceptable centuries ago. Ice cream etiquette required that ice cream forks be used. These utensils featured a spoon-like body that had points on the top. You would press the sharp end into the ice cream and then scoop it up with the fork’s small bowl. 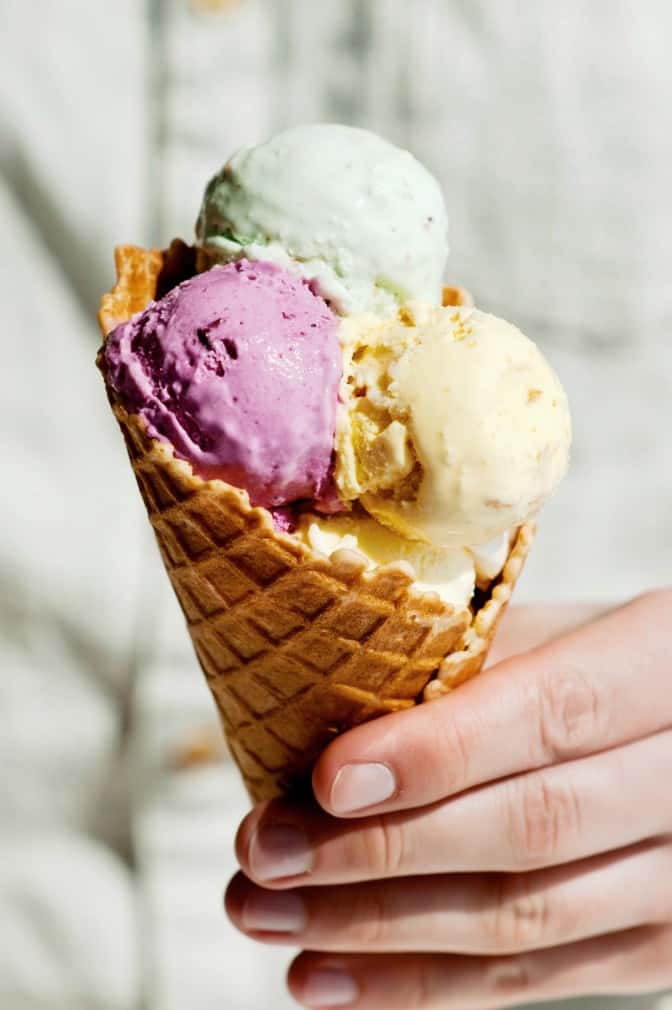 For most, ice cream is meant to be sweet, but years ago it was also savory. Oyster ice cream (referred to as oyster cream in heirloom cookbooks) is believed to have been popularized by Mary Randolph, a renowned cookbook author. To begin with, the oysters needed to be soaked in water. The juice was then strained into a bowl alongside eggs. After it was mixed, oyster ice cream needed to sit in the freezer for a few hours.

During Victorian summers, cucumbers were a beloved vegetable. Victorians decided to experiment with it to see if it could be made into a refreshing ice cream. To make it, they would purée the vegetable and then mix it with sugar, cream, brandy, and lemon juice.

Another Victorian test was lemonade ice cream. This tart drink was mixed with egg whites and then frozen. This resulted in a creamy base that left behind a tangy aftertaste.

Lady Borden concocted this pleasant option back in the early 1950s. It featured a coconut base mixed with juicy cherries that stained it red.

In 1953, Meadow Gold started selling Coronation Vanilla. Designed to celebrate Queen Elizabeth’s descent to the throne, it contained a luscious vanilla base mixed with spices.

During the 1950s, Hawaii became an obsession for many. To jump on this fad, some ice cream makers created Hawaiian ice cream. This would usually contain pineapple chunks and coconut flakes. With one bite, consumers could instantly transport themselves to this tropical destination.

Back in the 1600s, Ambergris was often used to prepare ice cream. Made from sperm whale puke, it has a slightly musky yet sweet taste. This ingredient was very expensive so it was usually only eaten by the rich.

It’s believed that orange blossom was one of the first ice cream flavors. It was simple to make and only required that fresh orange blossoms be infused into the cream.

Rocky Road first came out in 1929 in Oakland, California. It was devised by William Dreyer who wanted to create a treat that people could enjoy while coping with the Great Depression. Featuring a chocolate base, it had a handful of walnuts and marshmallows that were cut into bits. He decided to give it its telling name after the infamous stock market crash which resulted in a “rocky road” for many.

While alcohol was banned, that didn’t stop some from sneaking it into their menus. Aspen Crud was a sly Prohibition ice cream cocktail by Jerome Bar. It featured a few scoops of vanilla with four shots of bourbon.

While butter pecan ice cream had been around since the 1800s, it wasn’t until the 1960s that this flavor took off. Many began to appreciate the buttery taste and pecan chips folded into its thick vanilla base. While it was eaten everywhere it was especially enjoyed in America’s South.

The French Violet Sundae was a favorite for some in the 18th and early 19th-centuries. A few scoops of vanilla ice cream would be placed into a sundae cup and then topped with a sweet violet bisque.

Ice cream has a surprisingly rich history. While its ingredients and flavors have changed over time, it continues to be a favorite treat for many to indulge in and socialize over.