And the case for well-loved scratchy records of yore…

I grew up in a house filled with music. I count myself extremely lucky in that regard. My parents owned three record players.

In the family room was the stereo, which consisted of a turntable, a receiver, an 8-track tape player, and two ginormous speakers that, when cranked up, could shake the glass in the front picture window.

The second record player, a portable in its own tan and brown case with brass latches, Mom kept in her bedroom.

It was the one she’d had when she was in high school and college in the 50s and 60s. She also had two cases of 45s to go with it. I first heard songs like One Eyed Flying Purple People Eater and It’s my Party (and I’ll cry if I want to) sitting on the green shag carpet next to that record player.

The phonograph had a place of honor in the living room. Dad used to polish the brass horn bit every week. And on Sunday afternoons, if there weren’t a football game on and sometimes even if there was, he’d wind the crank and play scratchy records of Bing Cosby and Perry Como.

The Story of the Phonograph 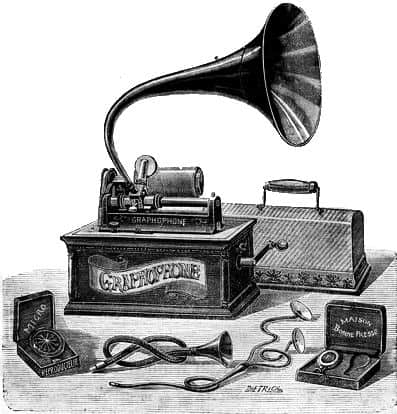 Invented in 1877 by Thomas Edison, the phonograph was the first device able to reproduce recorded sound.

This was achieved by recording the sound onto a sheet of tinfoil that was then wrapped around a rotating cylinder.

A stylus, in response to sound vibrations, would then produce up-down and hill-dale grooves in the foil.

In 1880, Alexander Graham Bell and his Volta Laboratory made numerous improvements to Edison’s model.

Two of the most significant of these were using wax-coated cardboard cylinders and a stylus that was able to move in a zigzag groove.

Then, in the 1890s, Emile Berliner spearheaded the transition from cylinders to flat discs.

Volta Associates filed a patent application and started seeking investors in 1885 for their phonograph and in 1886, The Volta Graphophone Company was created.

After several demonstrations of the device, some Philadelphia businessmen formed the American Graphaphone Company in 1887, which then merged with the Volta Company, ultimately evolving into Columbia Records.

From Cylinders to Disks 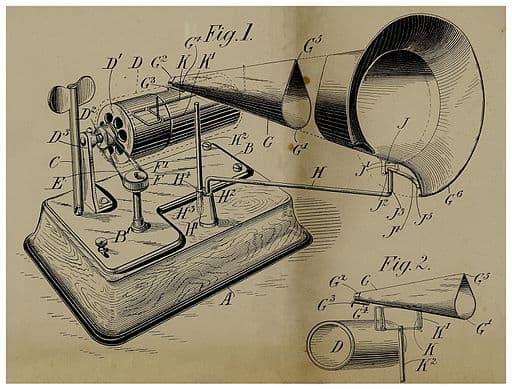 Discs are not necessarily better than cylinders but they are more easily mass-produced by stamping and molding.

And disks require much less storage space for the avid collector.

Berliner managed to argue successfully that his technology was different enough from Edison’s so that he wouldn’t have to pay royalties on it.

In 1892, he introduced the first flat disc gramophone record to the public. These records were five inches in diameter and recorded on only one side.

By 1908, double sided recordings were in high demand and the use of the cylinder declined. By 1912, even Edison’s made the move to discs and began producing the Edison Disc Record.

Until about the 1920s both disc and cylinder recordings and the machines to play them on were mass-produced. The disc system eventually proved more popular – mainly because of its cheaper price and some stellar marketing by disc record companies.

An Affinity for Vinyl

The phonograph I grew up with is probably from somewhere around 1915 or 16. I’m always amazed that, after all these years, it still works.

Dad still plays those old scratchy records too, even though we’ve bought him the entire Bing Cosby and Perry Como collections on digitally remastered CDs. He says the CDs just don’t sound right and I have to admit I understand.

There are certain things I can only listen to on vinyl also, like anything by the Doors.

My Mom absolutely loves the Doors (that’s how cool she is) and I grew up hearing People are Strange and Break On Through on vinyl at very high volumes.

There’s a skip in Break on Through on Mom’s record, right at the beginning between try to run and try to hide and when it’s not there the whole song sounds weird to me. 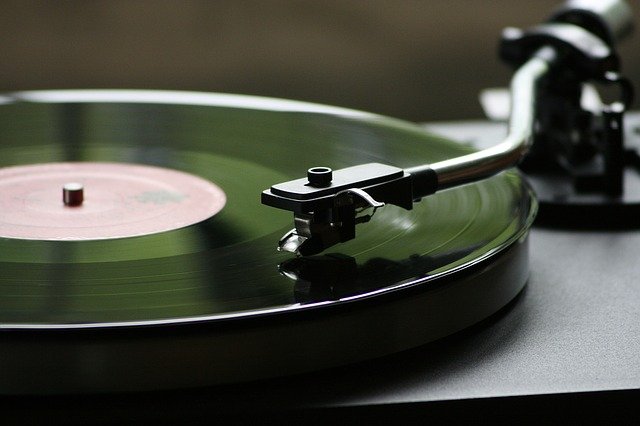 Vinyl, incidentally, as a material to make records, wasn’t used until the 1930s.

Most records before then were made of a shellac compound that was heavier and more brittle.

In 1955, Philco produced the first all transistor portable phonographs.

These models used alloy fused audio frequency transistors and 1 ½ volt D batteries. They were discontinued a year later though as the transistors proved to be too expensive compared with vacuum tubes. 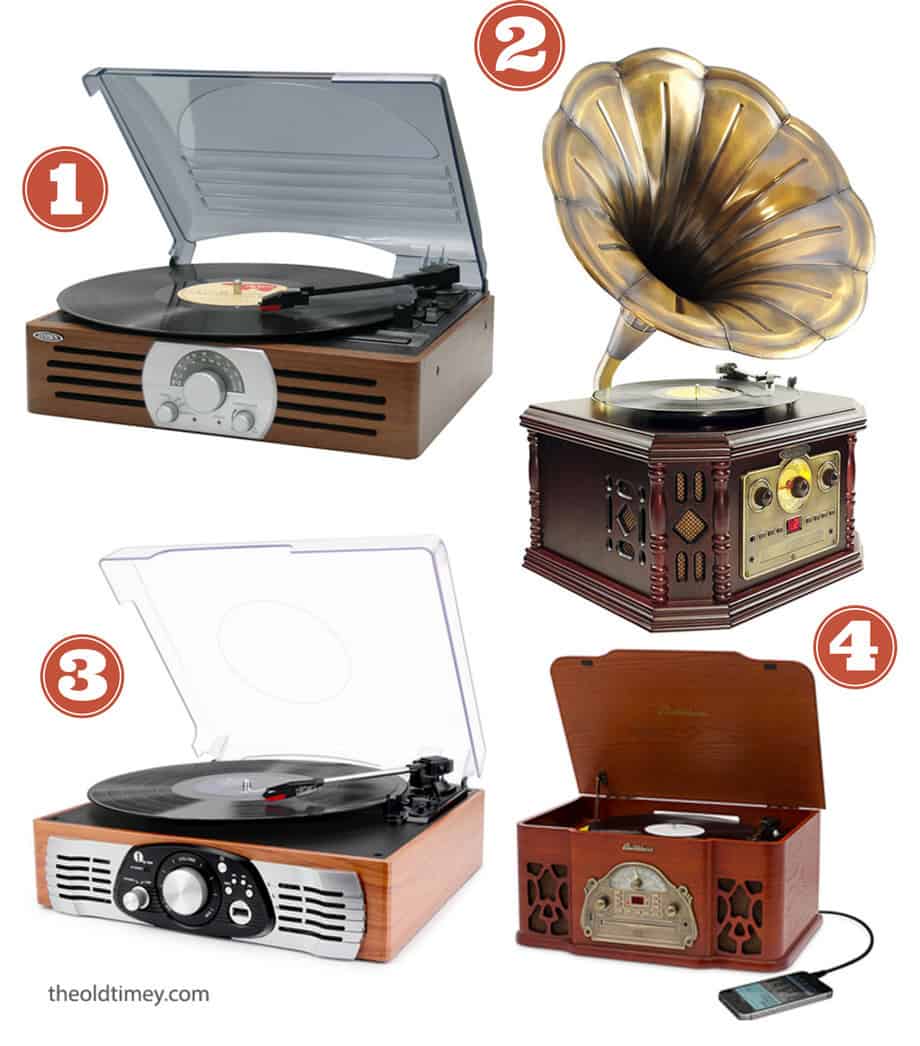 There are many companies these days that sell reproductions of antique phonographs (just do a search on Amazon or at Houzz), though almost all of them come with a disclaimer that, although they may play 78rpm records, they are not functional and for display purposes only.

Even more impressively though, you can still find actual antique gramophones and phonographs at estate sales or online auctions that have been lovingly maintained through the years and still play as they always have.

Mom and Dad have a pretty swanky modern stereo system now with a turntable, CD player, and receiver that my brothers bought them one Christmas.

They even have a robust collection of CDs. But on most Sunday afternoons, Dad still goes into the living room to sit next to his old phonograph and listen to Bing Cosby. He knows every scratch and skip in those old records by heart. And that’s just the way he likes it.