Arnex pocket watches were very popular in the United States in the 1970s and 1980s. They were made in Switzerland and were highly affordable. In fact, units sold reached the millions because they were accessible to almost every budget.

Due to their prevalence, they aren’t particularly valuable today, but they’re still fun vintage pocket watches to collect, as long as you don’t get stuck paying too much. 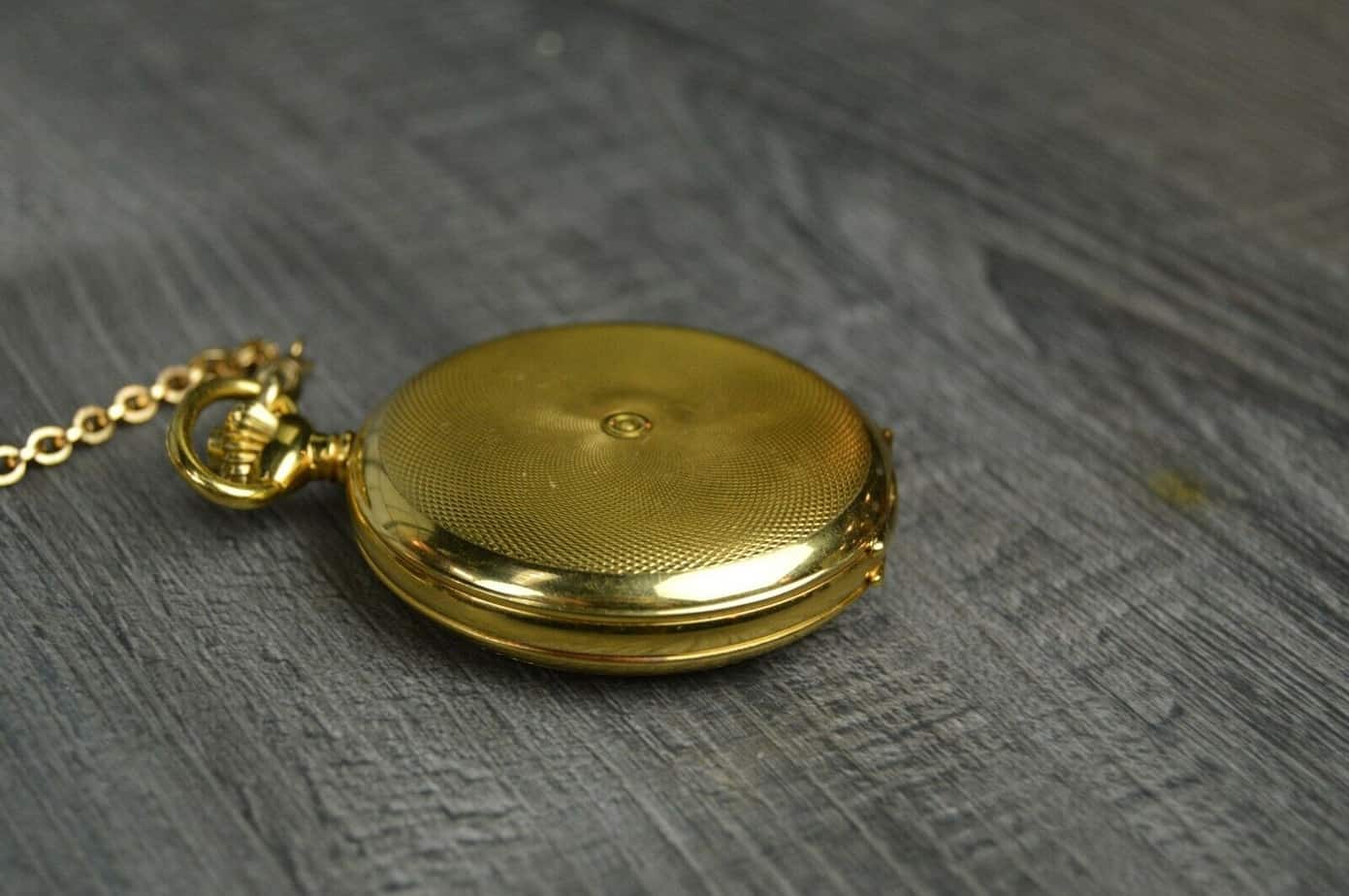 Arnex began in 1971 when Claude Wollman started it as a Joint Stock Company with a whopping 50,000 Swiss Francs. His goal was to sell cheap pocket watches to Americans. They made watches in Switzerland and sold them in the U.S.

They used cheap materials like clear acrylic crystals, base metal cases, and metal dials. They also used what were considered very cheap Unitas 6497 movements, which later became the workhorse of several luxury watches.

They began by making movements, and sold their watches in the United States. After the value of the Swiss Franc plummeted in 1974, the watch industry failed. In 1995, the Swiss Official Gazette of Commerce prohibited Arnex from conducting business because they had failed to pay their registration fees.

For the next few years, Arnex floated about as both Swiss and French companies bought and sold the company at will. They made pocket watches and did a fair job of owning the market. Finally, J.P. Pingouin Co, Hunsberger & Cie bought Arnex, allowing them to enter the cheap watch market.

Through a series of mergers, Arnex became a part of Lucien Piccard and began manufacturing private label watches. Any company meeting the minimum order amount could purchase Arnex watches and put their own label on it. 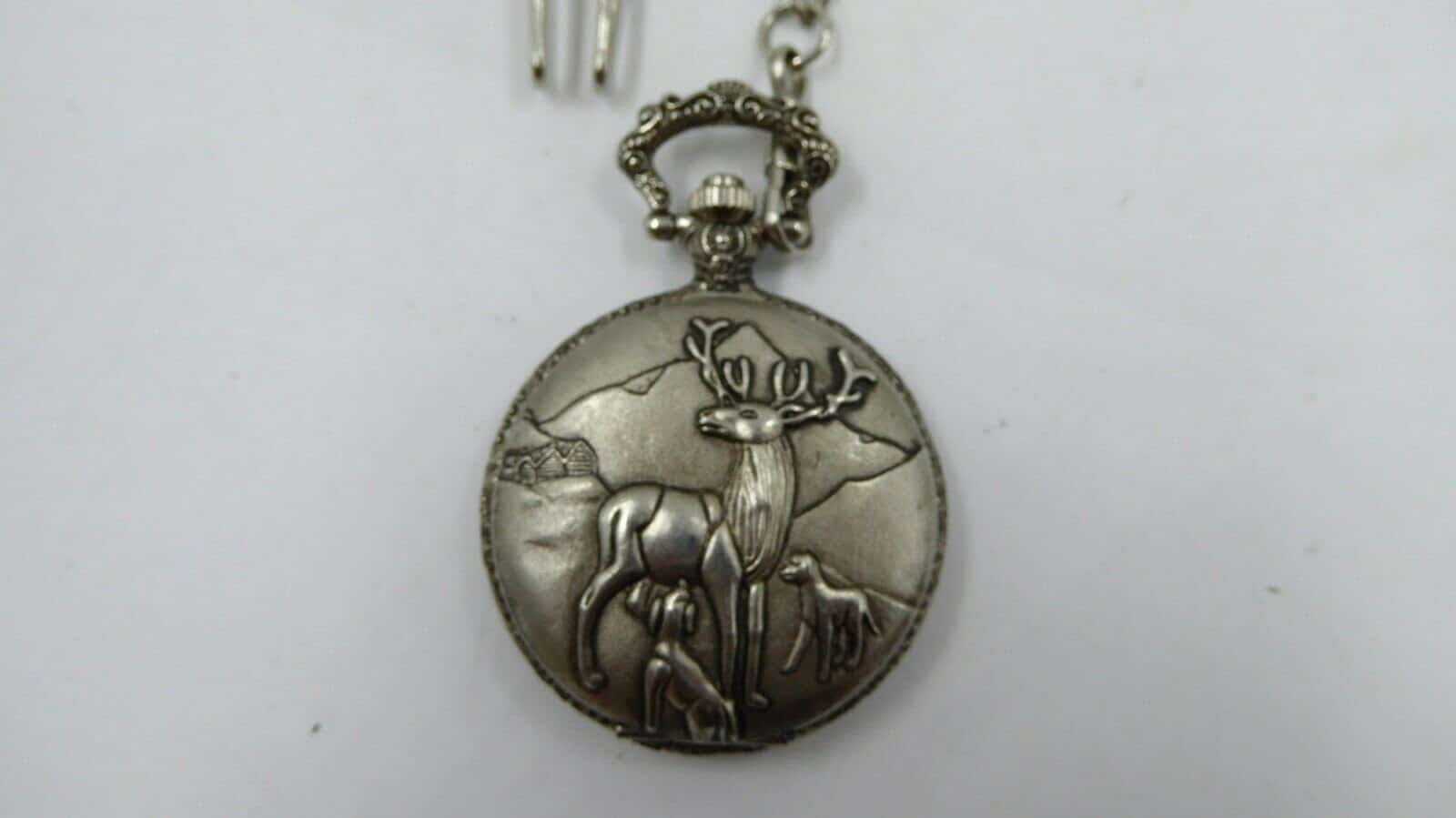 Swiss labor in 1971 was cheap and so were the products. Contrary to popular belief, Swiss movements were not particularly high quality at the time. It took 20 years for them to gain this reputation.

The Swiss made movements all over the world very cheaply, in order to compete with other cheap watch manufacturers like Timex.

Because Arnex made watches for hundreds of different customers, including discount and department stores, they made their “high-end” watches the same way they made their discount watches. The designs and the movements are mostly the same, with different private labels.

If you’re purchasing an Arnex watch with a Unitas 6497 or 6498 movement, you may find some value, but it won’t be much more than $100, and not all Arnex watches come with these movements. Many Arnex watches are only worth about $10.

For example, Arnex watches with sweep second hands rather than a small one at the six or nine o’clock position aren’t worth much. Neither are those with quartz movements.

Another way to identify these cheap watches is by the second hand above the six at the bottom. These are wristwatch movements and not very valuable. Those watches that have a 50mm case rather than a 44mm case are also cheap.

Arnex used low quality pewter or steel despite sellers trying to convince you that it’s stainless steel or sterling silver. Arnex used a chrome plating that flakes, and you’ll regularly find them with imperfections. Even the gold cases are simply gold plating, not pure gold.

In fact, many collectors who buy Arnex watches today will only buy them for the movements. They remove the cases and throw them away.

Most of the Arnex watches you find today are on eBay. The majority of them were made in the 1970s and 1980s and are not valuable. However, these sellers will list them as priceless Swiss watches and mark them way above their value. 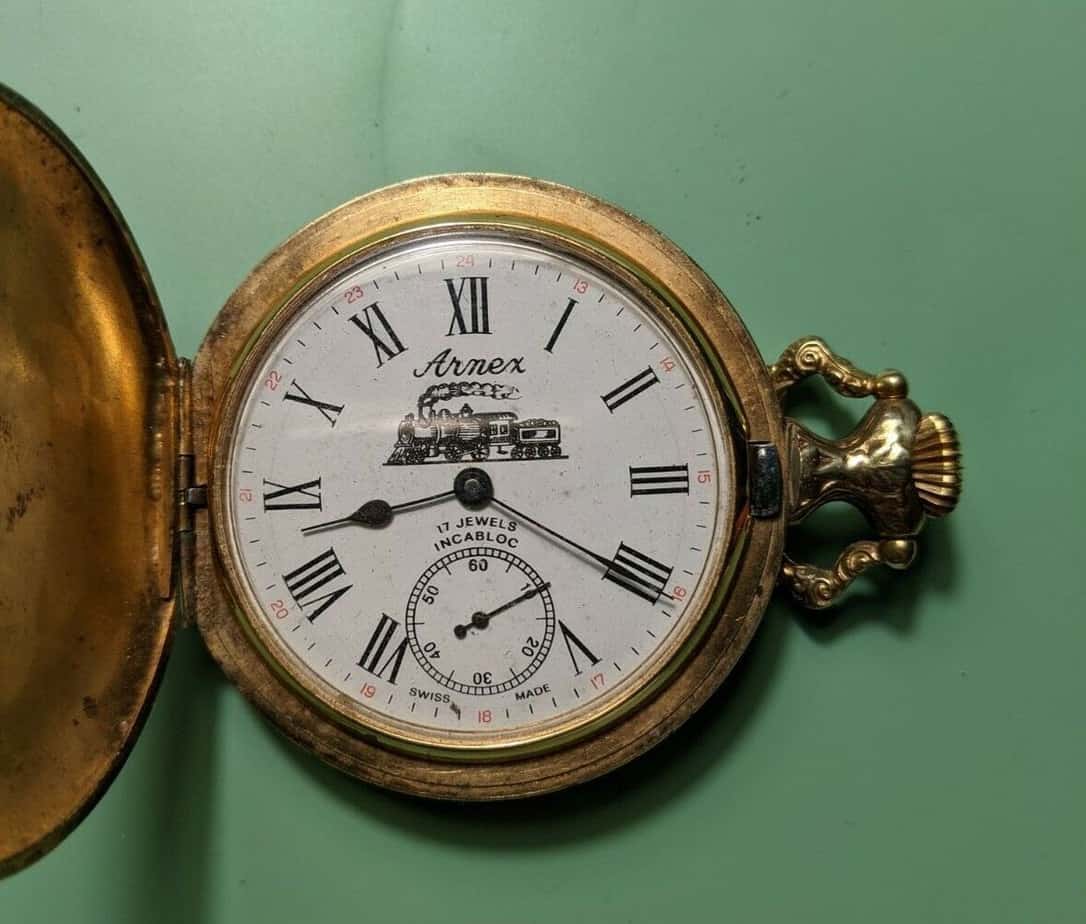 As you can see, this watch has a second hand in place of the numeral six at the bottom. It’s marked with Arnex on the face and contains a 17-jewel Unitas 6498 movement. It’s made from a base metal and plated in gold.

Its value is derived from the movement alone, and in perfect working order, would be worth $60-75. The case is only worth about $5 and could be disposed of if not needed. However, for a collector, this proper case closure that still looks new would be a nice find. 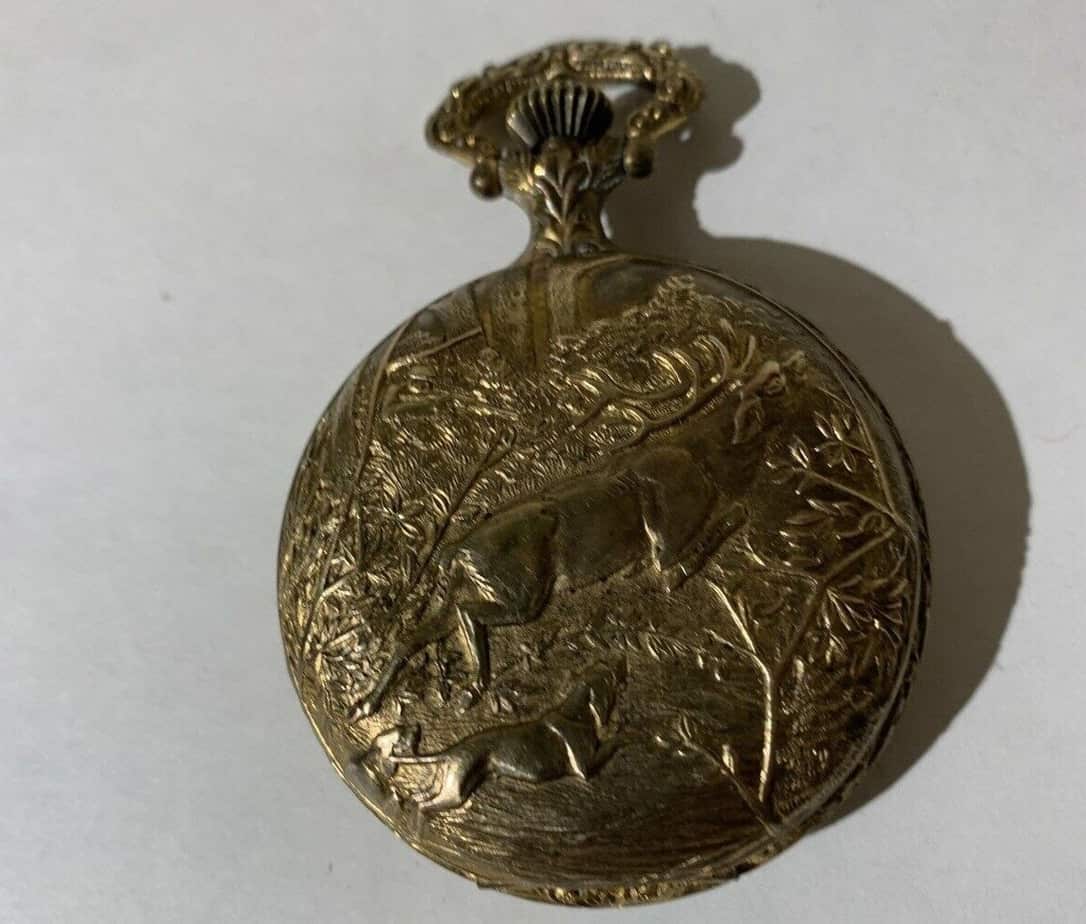 Arnex also made several cases with designs on the front, including scenes of hunting, landscapes, and even a bicentennial release with the Liberty Bell. While these are collectors pieces for those who are searching, they’re also not particularly valuable.

It would be acceptable to pay $25-35 for one in good condition. However, because the cases look more ornate, sellers frequently think they’re more valuable. The cases do look nice, but they were sold at discount outlets like Sears and Montgomery Ward for very cheap. 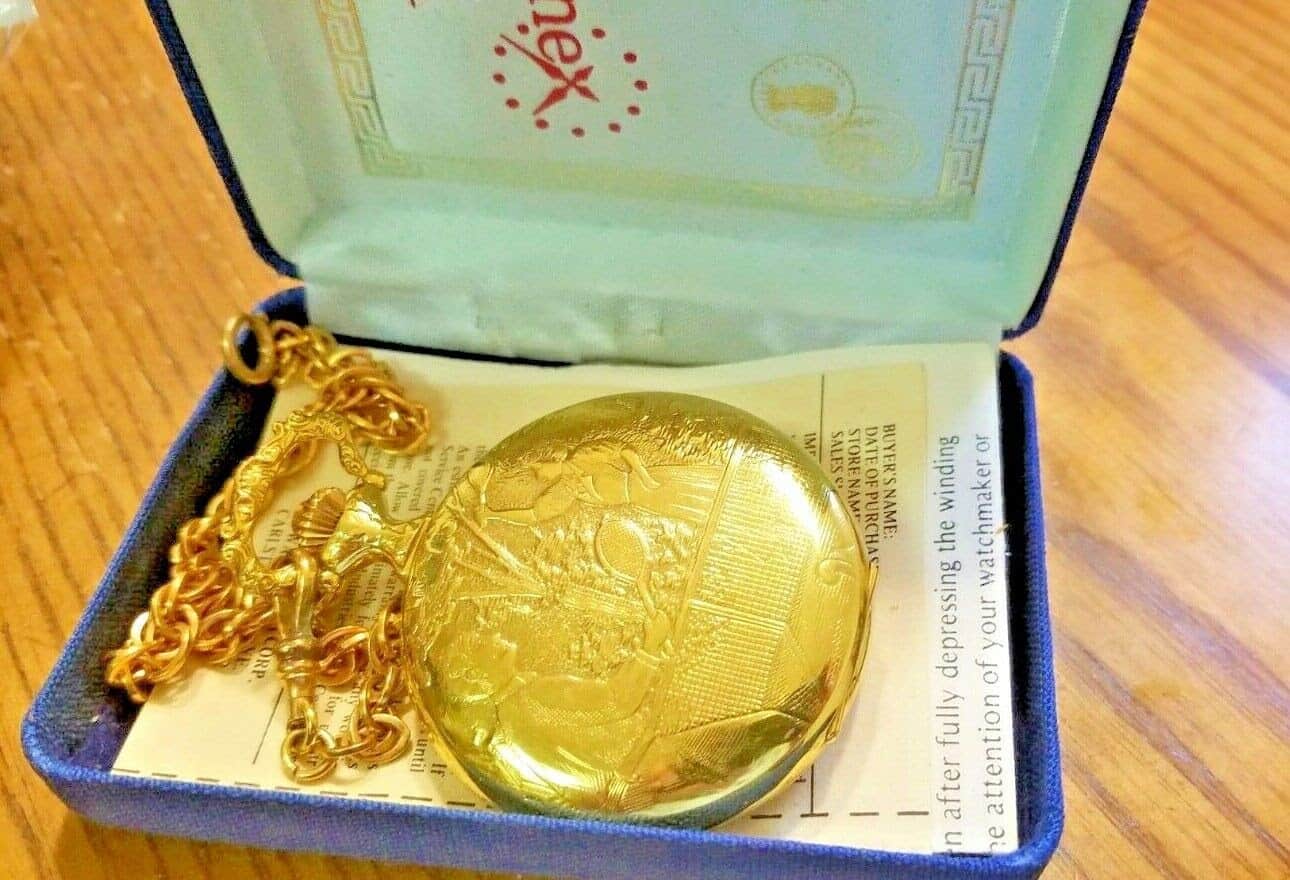 This particular model is in excellent shape, still runs, and is still in the box. Vintage Arnex pocket watches like this one are likely to go for $100 or more as long as they have the Unitas 6498 movement.

Arnex pocket watches aren’t nearly as valuable as a vintage Hamilton, but they can still be collectible and fun to seek out. You’ll find them at estate sales, antique malls, flea markets, and online. However, it’s important to proceed with caution to avoid paying too much. Check out Etsy.com's Arnex pocket watch selection for the very best in unique or custom, handmade pieces from their pocket watch shops.