Civil War political comics helped shape the American popular understanding of how we talk about politics. These political cartoons depicted every side of the issue and came from all walks of life. These cartoons have become one of the best ways to understand American life during the Civil War.

Political cartoons may have defined the popular opinions during the Civil War, but as an art form they got their start over in England.

Like much of early American cultural attitudes, political cartoons came from the United Kingdom.

James Gillray, who lived from 1756 to 1815, is considered to be the father of contemporary political cartoons.

There are a few key factors that led to political cartoons becoming so popular during the American Civil War. The first and most important of these factors was the booming literacy rate in the United States. Before the Civil War, Americans saw their literacy rates beginning to grow at an increasing rate.

In addition to this, printing press technology had advanced to such a point that popular newspapers we’re just starting to become the dominant media form of the day.

Thanks to these two factors, more Americans were able to understand the nuances of political commentary and had greater access to the newspapers which expressed it.

Let’s take a closer look at some of the famous political cartoonists of this time period.

Political cartoons were booming business during the Civil War. There are countless different individuals who contributed their artistic styles and political opinions to this growing medium. Here is a highlight of three of the most important figures in Civil War political cartoons.

Given the events and nature of the Civil War, Henry Jackson Lewis is possibly one of the most important Civil War political cartoonists. Despite the booming literacy rate and increased availability of newspapers, African Americans during the Civil War were largely left behind by these advances. 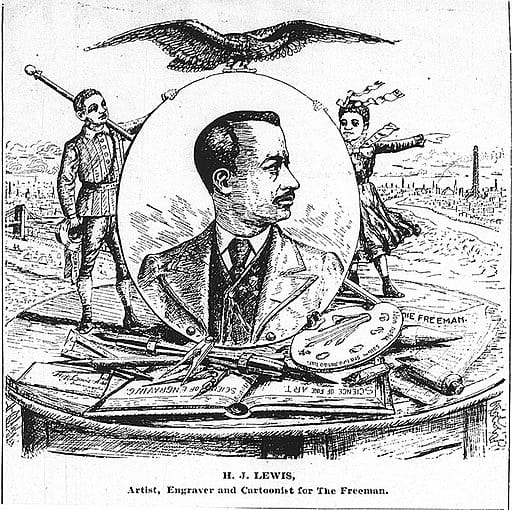 Henry Jackson Lewis was one of the few African American political cartoonists to be active during and after the Civil War. His political cartoons give a rare glimpse into the perspective of African-Americans during this historic event.

Quite possibly his most important political cartoon is simply titled “Self Portrait” and depicts the hope of a better future where African-Americans  have won their equality and are free to experience life to its fullest.

Thomas Nast was a german-born American immigrant. Nast is considered the father of American political cartooning. The iconic legacy of Thomas Nast lives on today thanks to his creations including the popular depiction of Santa Claus as well as using the elephant as the symbol for the Republican Party. Thomas Nast is often attributed as creating the figures of Uncle Sam and the Democratic donkey, but this is not true. While he did not create these figures, he is responsible for launching them into mainstream political discourse.

Artist unknown is an interesting person to list as one of the most famous political cartoonists in the Civil War. However, many of the most recognizable and important political cartoons of the Civil War have no known artists. They were either submitted anonymously to their publication or they were simply not credited and the original author authorship has been lost to history. Famous cartoons such as 1861’s Why Don’t You Take It were published without an attached author like many of the other cartoons of that time. 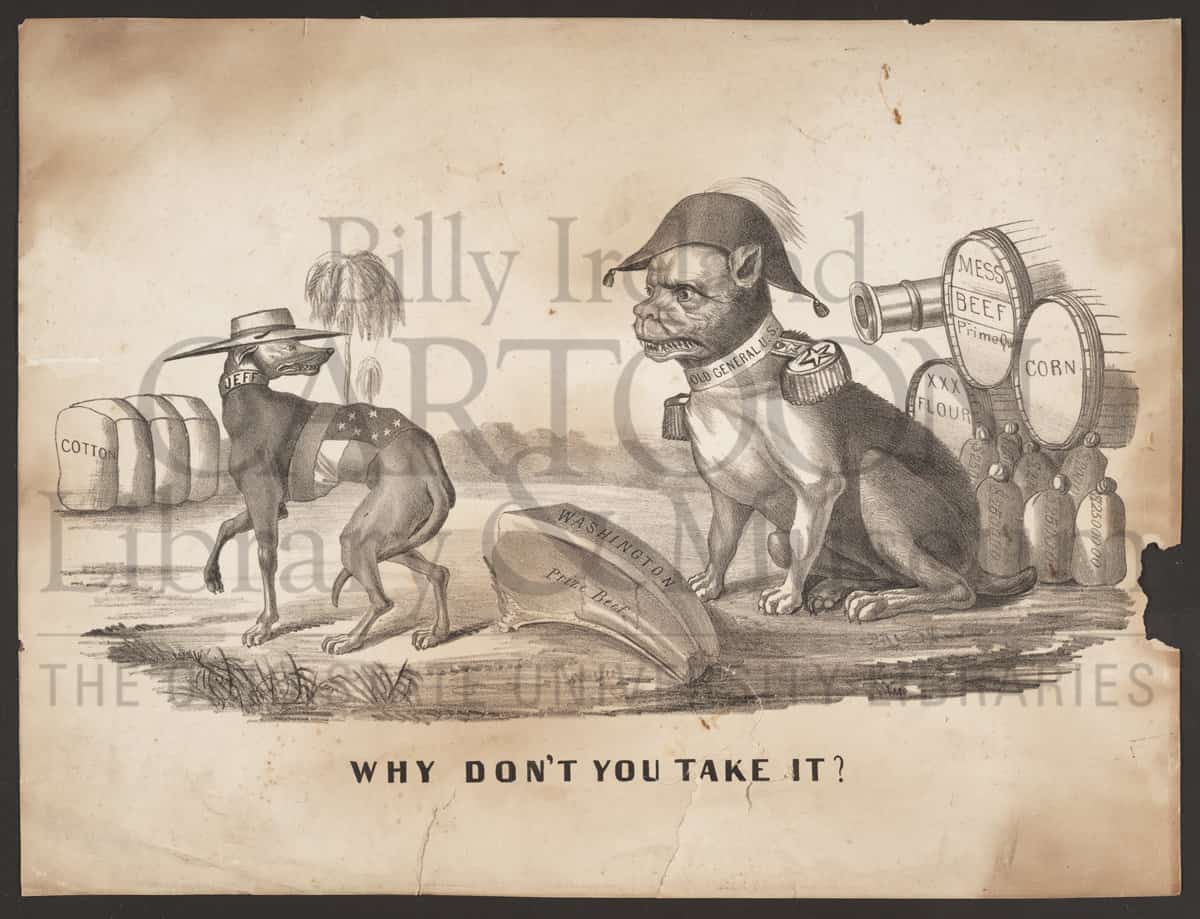 Political cartoons were outstandingly popular during the Civil War. In fact, that’s where they got their start in American politics. It is not difficult to find examples of political comics that helped shape popular opinion.

These political comics depicted different aspects of the Civil War and help us today have a better understanding of how Americans experienced these events as they happened.

Why Does this Matter Today?

Satire is a uniquely American expression of political opinion. America has a rich tradition of using satire to point out the foibles in popular politicians on both sides of the aisle. In a way, satire is the American language of politics.

When we think about contemporary political satire, we tend to think about television shows such as The Daily Show and satirical newspapers like The Onion. Both of these satirical media outlets are direct descendants of Civil War political cartoons. On the surface they might seem incredibly different, but underneath they share the same fundamental satirical attitude. Understanding expressions of contemporary politics is rooted in understanding our nation’s history.

Satire is such an ingrained way of exploring politics in America that it is even a part of television shows that are not expressly political. Sitcoms such as Parks and Recreation share the same style of humor as some of these Civil War political cartoons. They are satirical, and often mocking, explorations of American politics.

While the medium may have changed, using satire to explore contemporary political issues has been an American tradition that since our country was founded.

How to get Started Collecting Civil War Political Cartoons

If you’re looking to get started collecting Civil War political cartoons there are many places to turn. Some of the best resources for finding more information on political cartoons are local historical societies such as the Historical Society of Pennsylvania.

The Library of Congress is also a wealth of information when it comes to Civil War political cartoons.

When in doubt, you can always turn to your local college or university for more information from their history departments. This article from Dartmouth is just one of many examples of universities researching and interpreting the history of Civil War political cartoons.

Just like starting out collecting any bit of historical memorabilia, the best way to get started collecting Civil War politic