Hey, all you Flippers and Flappers, do you know your onions about clothing during prohibition? Don’t know who that is?

A flipper is a guy, and a flapper is a girl, and to know your onions is to know what you’re talking about – you’d say all these things if you were living during the Prohibition Era in the United States from 1920 to 1933.

The prohibition era was a time for big changes in the United States, and those changes were reflected in the fashion of the time.

From bobbed haircuts, cloche hats, pinstripe suits and black patent leather shoes – clothing sure was berries (great, that is) during prohibition! Let’s take a look at some defining styles of the era.

From the Top: Hair, Hats and Make-Up

Women’s Hair: The Bob Cut and the Eton Crop: A Sign of Independence 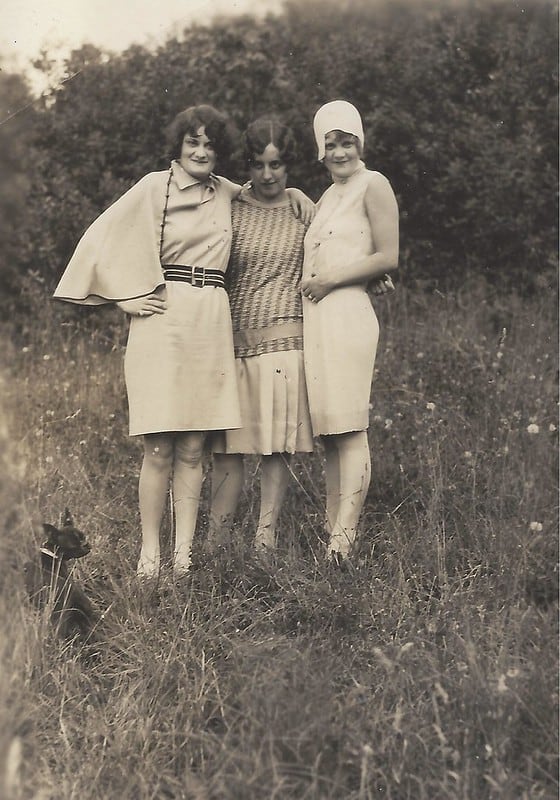 Women were finally having their fair share of fun during the prohibition era, thanks to their new found independence, starting with earning their right to vote in 1920.

Fashion for women made drastic changes in response to their newfound status.

Women abandoned long and involved victorian hairstyles in favor of a short and easy to manage bob or crop cut. Instead of letting their hair down to have some fun – they cut it instead!

The bob eventually gave rise to the popular Eton crop.

This new haircut showed a change not only in fashion, but in the way women related to men.

This haircut showed women’s new independence as they would strut their way right into mens’ barber shops to get the cut:

“Women had to invade men’s space (the barber) and cut off their hair, which had been a male-imposed determinant of their sexuality.”

As for men, usually, their hair would be covered by a hat. But the haircuts would be short, and often slicked and oiled back.

The style men sported back in the bootlegging days is actually making a comeback! If you take a look at this photo and find it looks awfully familiar, it’s because it’s one of the most popular cuts in 2022.

It’s today called the “Prohibition High and Tight.” It’s a variation of the longer style on top that would be slicked/oiled back, with the high and tight military cut (short in the back and sides).

As for the genuine haircuts used as the vintage inspiration for today, most men kept their hair short on the sides and back, but long on the top to slick back, and wore a hat over their hair.

Because of wearing hats all the time, men would end up with what we call “hat hair,” but they called it “helmet head” or “Patent leather hair.”

When the hats weren’t donned, men would slick their hair back for a flat and sleek look. A product called Brilliante would give that slick movie star shine; if you didn’t have the dough (cash, that is) for Brilliante, men would use petroleum jelly instead.

Hats weren’t just for men during the prohibition era.

Much like the short haircuts, ladies made their strides with cloche hats, too. The bob cut and the Eton cut were the perfect match with the cloche hat; some women tried to mimic the bob cut by using bobby pins to create the short look, but the cloche hat would show if you had the real deal bob.

Hats: Here to Stay for Men 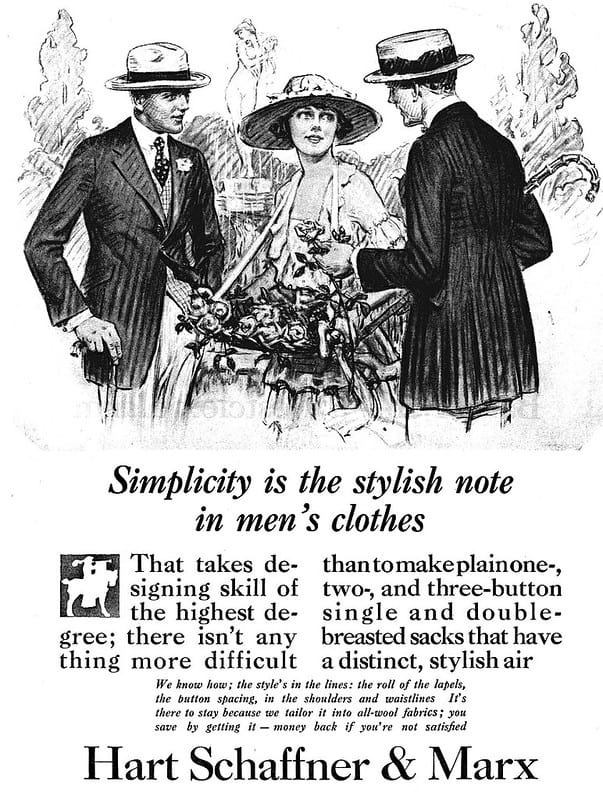 If you were a real bearcat (good looking lady), you wouldn’t be able to resist a heartthrob (handsome man) sporting any of these nice hats.

This is by no means an extensive list; hats for men had plenty of variety to suit a man’s age, personality and professional endeavors.

Make-up became another sign of women’s independence; it was no longer seen as ‘improper’ to wear noticeable make-up.

Make-up didn’t become a usual part of a woman’s routine until movie stars and post-war manufacturing took off: “The economy of many developed/Western nations quickly recovered after World War I and, by the early 1920s, had started to bloom. This prosperity led to a massive increase in manufacturing.”

The most popular make-up and beauty trends during the 1920’s were:

Dresses & Suits: For a Night on the Town

There was an overall shift to simple casual wear during the 1920’s, as Americans became more active during this time and valued simplicity in their clothing; but, it’s worth taking a look at some of the most defining styles of the era for men and women when it came to having an exciting night on the town to enjoy some giggle water (slang for alcohol!).

The Flapper: The Defining Dress of the Decade

An overview of fashion from the prohibition era would simply be incomplete if we did not examine the defining dress of the decade: the iconic Flapper Dress.

Wearing a “flapper” dress and being a “flapper” meant more than just donning the outfit; the dresses showed the new independent status of women! According to Flapper magazine, it was a way of life: “Short skirts. Rolled socks. Bobbed hair. Powder and rouge. No corsets. One-piece bathing suits. No chaperons. Attractive clothes. The inalienable right to make dates. Good times. . .”

The silhouette of the flapper dress was not form fitting; it was described as “boxy” and “tomboyish,” which would be called an androgynous look. Women worked very hard to achieve this slim frame by working out and dieting to be the perfect slim flapper!

There were also many beautiful embroideries, bead designs and intricate designs that were worked into flapper dresses.

This is because some exciting discoveries were being made in the 1920’s: “Interest in archeological discoveries, such as King Tut’s Tomb in the early 1920s, and ancient civilizations influenced many Prohibition-era garments, and designers borrowed motifs and styles from Asia, the Middle East and Africa.”

If you were looking to take the town’s bearcat (pretty lady) out on the town, a suit was a must.

The three piece suit was a staple for men during the Prohibition Era for a night on the town; a coat or jacket, vest and trousers were required.

But there were a variety of different styles, patterns and fabrics to suit a man’s taste and budget.

Along with these fabrics:

To the Bottom: Shoes to Look Hotsy-Totsy 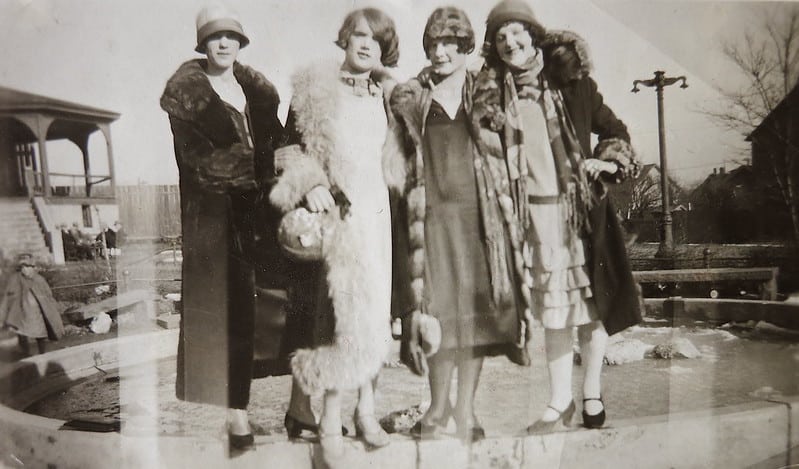 Another defining part of men’s shoes were directly part of the gangster and bootlegger activities were by these slick men sporting a pair of spats on top of their shoes:

“Grey, tan or off-white wool or linen spats with pearl buttons on the sides became synonymous with gangsters. The movies portrayed men in these styles and the general public copied them.” 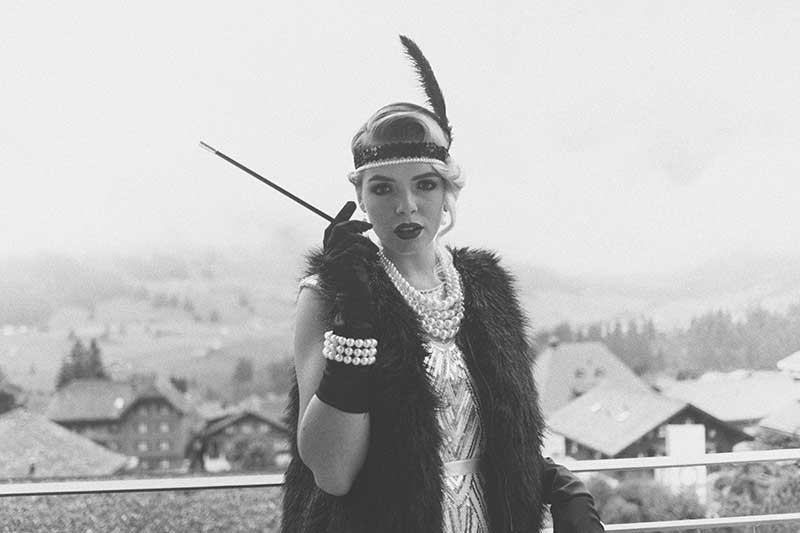 If any of these examples look awfully familiar to you, it’s not just in your imagination.

There’s been a renewed interest in Prohibition Era clothing thanks to films such as Benjamin Button in 2008, starring Brad Pitt, and The Great Gatsby starring Leonardo DiCaprio in 2013.

Recent television series such as Peaky Blinders  and Downton Abbey also sparked curiosity and interest in the fashion of the era.

Factor in all the 1920’s clothing and the great themes of fun, independence and progress, it’s something that still resonates with us today as we long for an outlet for stress.

Maybe it’s time for you to don a Panama hat to impress a lady, or find yourself a nice flapper dress to show the world you’re strong and independent?

If you want to bring a little taste of the fun of yesteryear into your life, now you’ve got some ideas to help bring this iconic time of fashion back en vogue.

You too can dress in 1920s style with vintage reproduction and vintage inspired 20s clothing available online. Be inspired by ModCloth's collection of women's dresses. Bring back the Great Gatsby era with these new 1920s men's clothes.  Price and other details may vary based on product size and color at Amazon.com.