Old Timey
The Old Timey contributors are a team of collectors, vintage lovers and history nerds. We love researching the stories behind unique collectibles, and finding retro inspired products with modern functionality.

While the material and types of pipes have changed over the centuries, the basic idea has stayed the same. A bowl with a hole is connected to a long hollow handle with an opening at the opposite end. The smoker inhales the smoke through the opening into their mouth.

Modern pipes have up to ten parts, but the idea is still the same, these parts include the following: 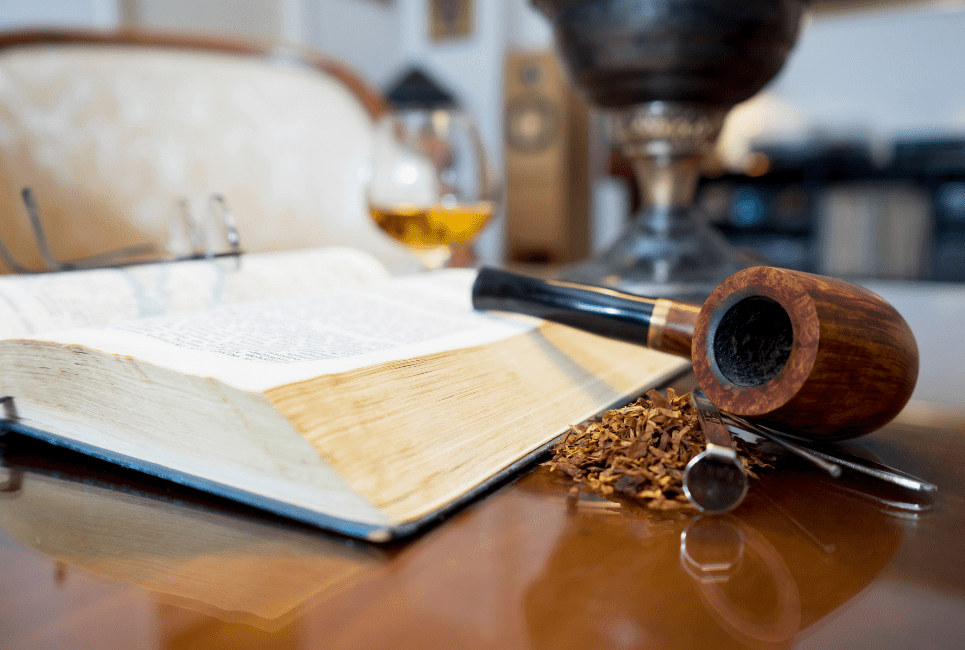 Currently, the oldest smoking pipes discovered by archeologists have been discovered in Egyptian tombs dating back to 2000 BCE. They were made of copper and were found alongside mummies (to be used in the afterlife), but whether they were used recreationally or ritually is unknown.

The pipe then traveled through Europe, where Greeks, Romans, Celts, and Nordic tribes were used to smoke herbs and plants like linden and hashish, found in Southeast Asia and the Middle East. Hippocrates, the father of medicine, suggested smoking to heal female sicknesses.

The first pipes found in Europe date to about 500 BCE and were made of reeds. Instead of placing herbs in the bowl, they simply breathed in the smoke from campfires.

Smoking in the New World

Proper tobacco pipes from the New World are discovered to go back to 1500 BCE. First, Americans would roll up leaves from the local ‘tobacco’ plants and create cigars to smoke.

When Christopher Columbus came to the Americas in 1492, he saw the natives smoking these plants and took samples back to Europe.

A French ambassador named Jean Nicot in 1559 had brought the practice of smoking tobacco to his home country as a medicinal practice.

Tobacco did not take off in London until John Rolfe planted seeds from Trinidad in the fertile Virginia soil in 1612 and started an industry. The imported plants had a better taste than the local ones, and about a ton was imported into the Thames to the London docks between 1616-1617.

Barely three years later, in 1620, over 40,000 lbs were imported! Tobacco pipes took off in popularity, but the manufacturing of them was tricky.

Let us have a look at the different materials that were used to manufacture these tobacco pipes:

The first manufactured pipes were made of clay with an extra-long handle called the clay tavern pipe (the 1650s). The clay pipes were popular in the 17th and 19th centuries and were also affordable. The downfall of the clay pipes was that they were incredibly fragile. Did you know that the clay pipes were the main vessel that was used to smoke leaves?

The tobacco pipe changed from English clay to Meerschaum in 1720 (“foam of the sea” in German), a material found in Africa and Turkey. This was mined from the compressed deposits of ancient, microscope marine life and had the consistency of softened cheese.

While it was almost as fragile as its predecessor, Meerschaum did reign supreme as a pipe material for about a century. Artists loved it for its ability to be carved into anything; smokers appreciated that the material, once hardened in the sun or a warm room, offered a smooth smoking experience.

Still, these fragile pipes were too expensive for a long-term habit. The long handle prevented hands and lips from touching the burning hot bowl of the pipe, but they also broke off constantly.

People finding these broken ends incorrectly surmised that the tips were broken off before being handed to the next smoker as a kind of hygienic practice. However, these pipes were created (in the 1720s) before the discovery of germs (1860-1864), so this myth is false.

Metal pipes became popular in Norway in the 1760s, but Meerschaum still lasted a century. An economically friendly alternative needed to be found, or cigars and cigarettes would usher in a pipeless future. Meerschaum is still used today, mostly as carved decorative pipes from Asia for the tourist trade. 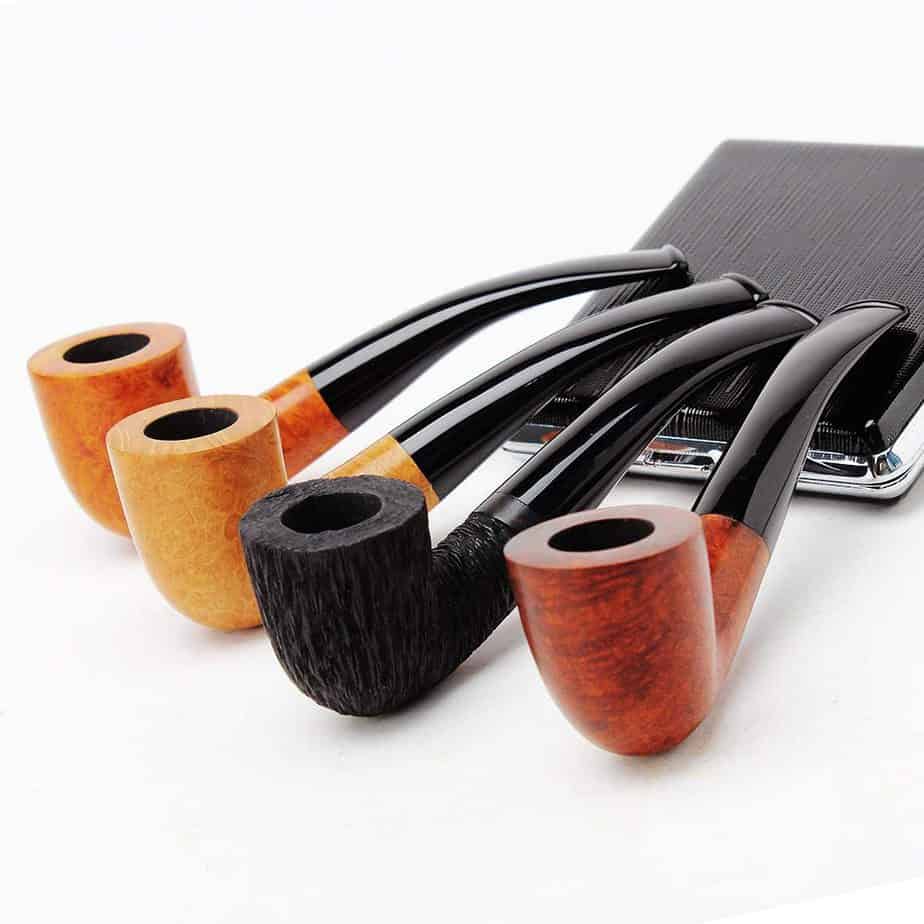 Briarwood would come to overthrow Meerschaum and clay and is still the best material for pipe smoking to this day. The grain of the wood is quite fine, and it’s much harder than previous materials. It is lightweight and non-toxic.

Briarwood is not only the most common wood for tobacco pipe wood, but it is also the strongest!

This diagram shows several common styles of tobacco pipes and is of a French or English design. Generally, they broke down into straight or curved pipes, and the shapes have come into and out of fashion over the centuries.

Danish artists in the 1950s created a movement of sculpting the briarwood in new shapes with different materials, but most pipes are the English design.

The Bulldog pipe came in the following styles, straight, bent, or curved. 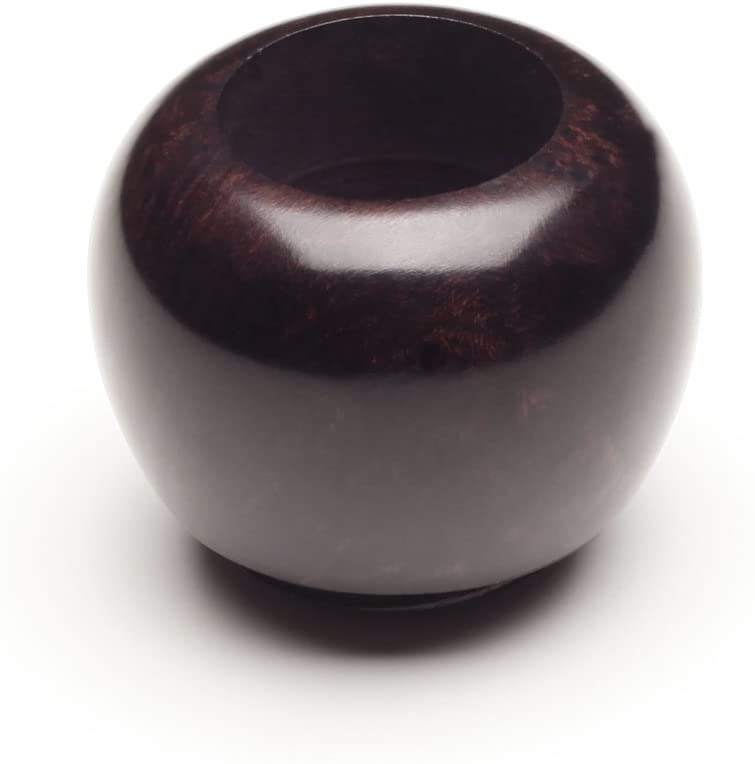 Yes, I know this is a funny name for a pipe, but it actually refers to the bowl that is round and shaped like an apple. It is a common pipe shape and is similar in style to the Billiard pipe. It is just the bowl that is more round in shape.

The Zulu pipe has a more curved variation to the Dublin pipe. And because of its curved mouthpiece, it is balanced, which makes it perfect for hands-free smoking.

This pipe is named after King Edward VII, former Prince of Wales. This pipe has a longer, and slender mouthpiece compared to other pipes and has a bowl that is short and slightly curved. All these features add to the pipe’s well-balanced and elegant appearance. 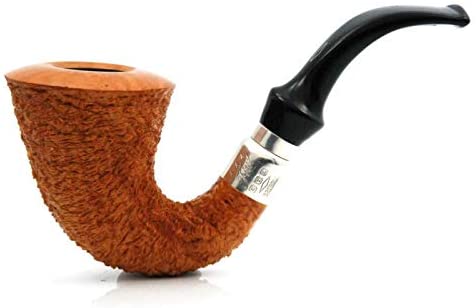 This type of tobacco pipe is quite large and also on the pricier side. It has a full to half bent pipe stem and is finished off with a lip on the rim of the pipe’s bowl. 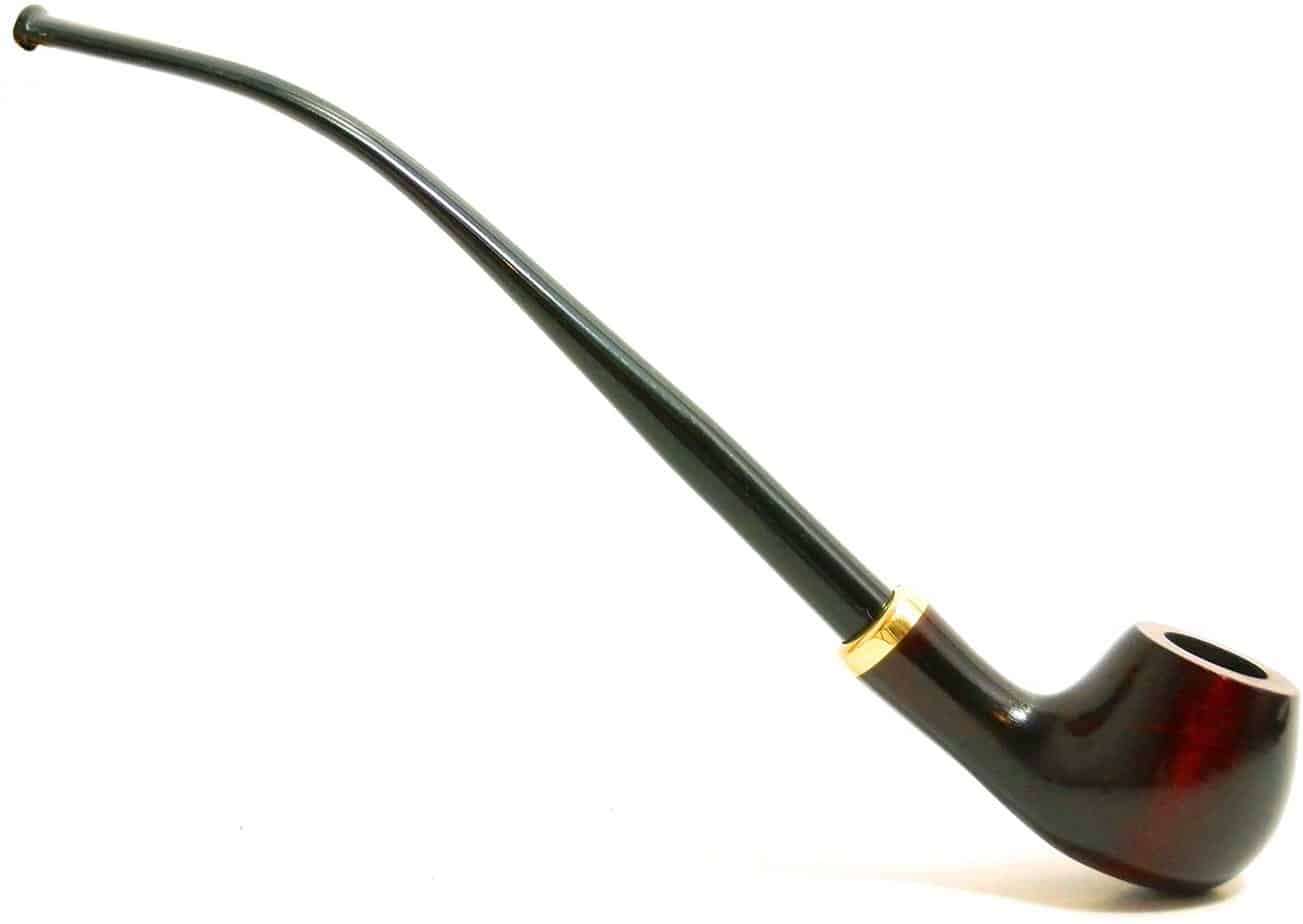 Lastly, on my list of favorites, I have the Churchwarden pipe. The Churchwarden pipe is a popular shape of pipe that is known for its long stem. They are also made with a variety of bowls so that they can suit different pipe smokers.

So I’m sure you have wondered whether there are any famous people who smoke Tobacco. And yes, there is! And I have created a list for you of some famous pipe smokers.

So whether you are a veteran smoker or you have just discovered the love of pipe smoking, I have the best tobacco pipes for you that you will absolutely love! The struggle is real to find a tobacco pipe that is of high quality, but with this tobacco pipe list below, the struggle will be something of the past. So let us dive right in! 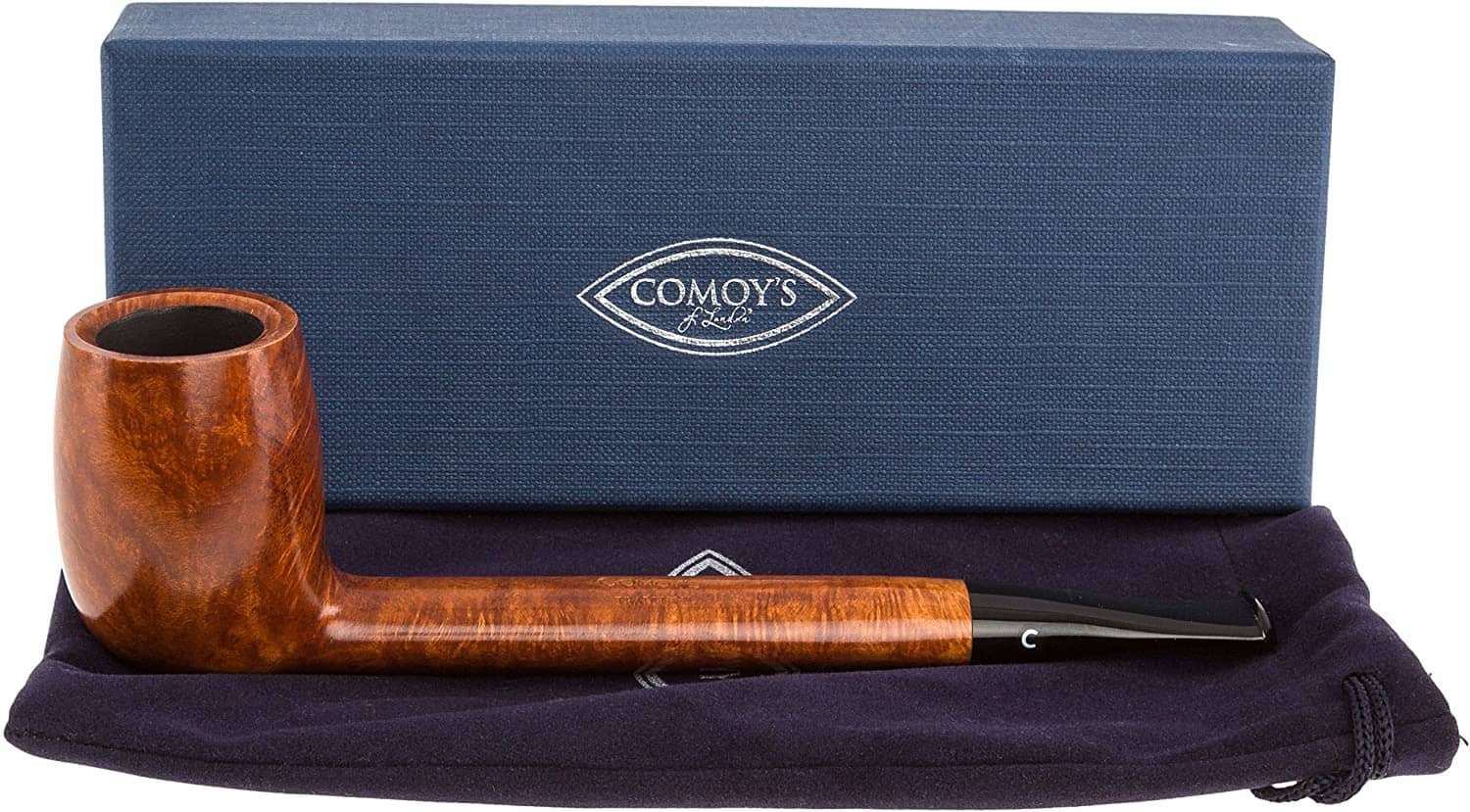 The Comoy family has been producing French pipes since 1825. And today, they are known best for their fusion with the Chapius family and the resulting Chacom brand. Anway, tobacco pipes are still produced as part of their only family line.

Vauen was founded in 1866 as the United Pipe Factory in Nuremberg to bring together German producers who had been producing pipes as early as 1848.

In 1909, it took the name Vauen and had enjoyed international recognition throughout its history. Hence, their Tolkien-style tobacco pipes are not replicas but handcrafted marvels of engineering and artwork. Absolutely stunning! 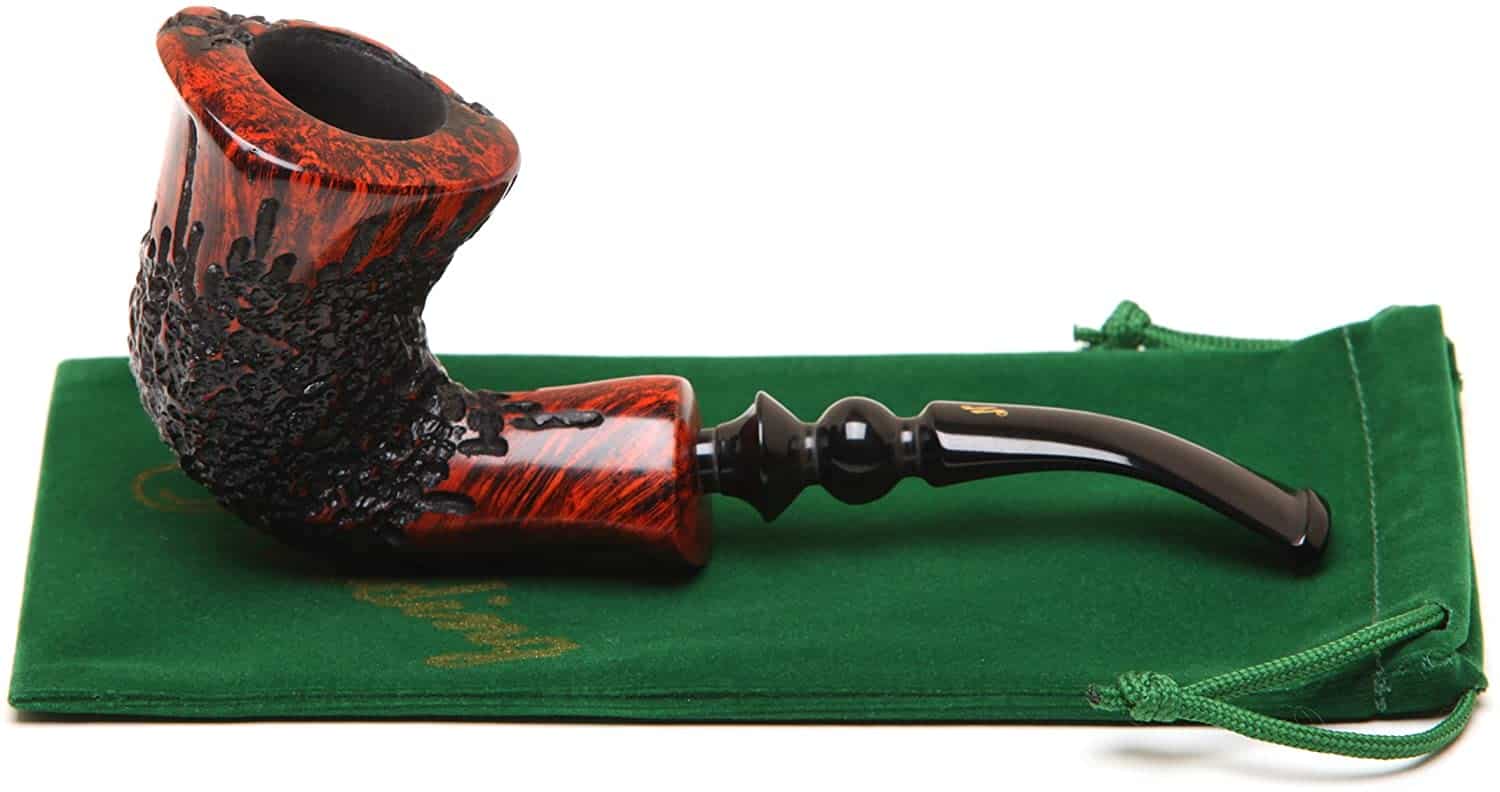 This tobacco pipe is absolutely beautiful! But let me get to the finer details of this pipe.

Erik Nørding first started working as a blacksmith in his father’s razor and garden factory when he was only 15 years old. Sadly, his father passed away a year later, and his mother sent him to train as an engineer.

When he graduated from high school in the1960s, he had already lost interest in the family business, and he started to make tobacco pipes himself.

With time, he expanded his business by restoring machinery from scrap yards. And after years, his hard work paid off when in the 1970’s he became one of the pipe craftsmen’s most admired and respected.

Today, he is famous for his distinctive handwritten style, and his workshop produces over 50,000 tobacco pipes a year. 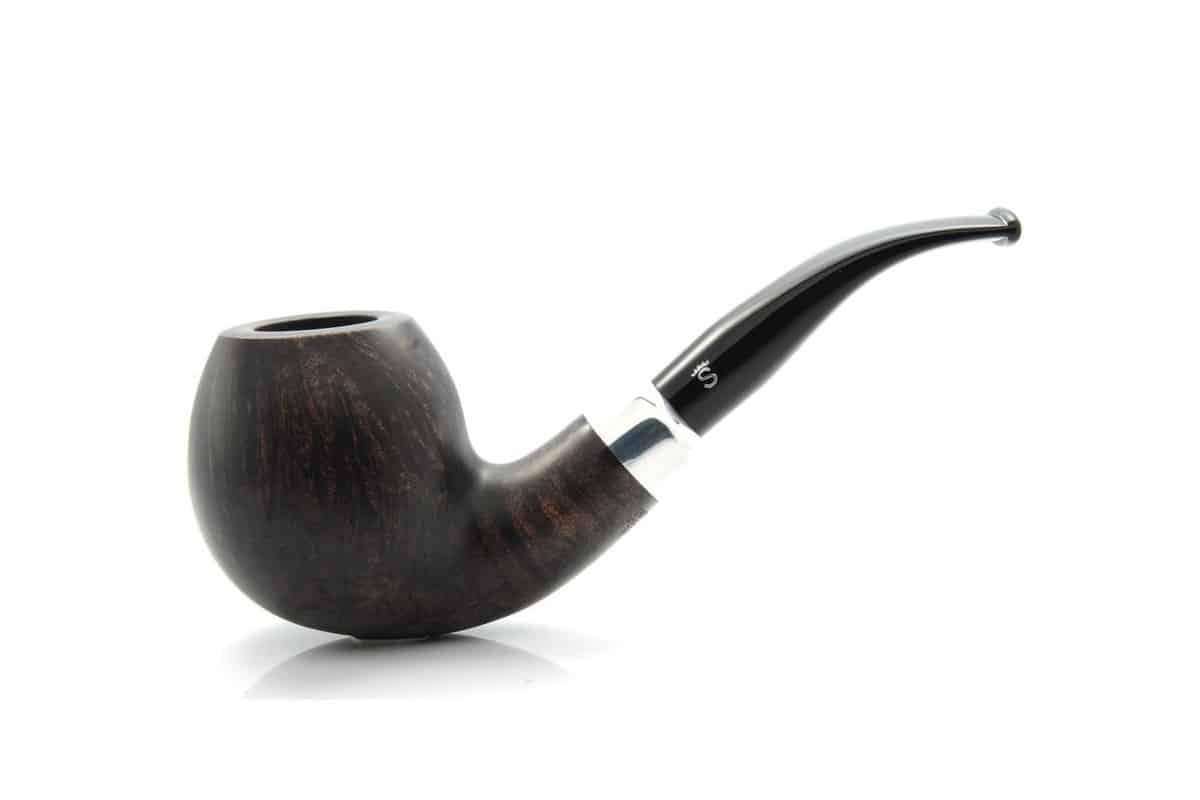 Stanwell was founded by Poul Nielsen in 1942 to produce tobacco pipes for the Danish market. Due to both the English pipes and the raw briar being rare commodities, Nielsen started to make beech wood pipes.

However, it was not until 1948 that the brand was named Stanwell to enhance its identity. Years later, Nielson even changed his name to Stanwell! Crazy right!

How to choose the best tobacco pipe for you.

Choosing the tobacco pipe that is the right fit for you is very important because this can either enhance or ruin your experience. Even though I have mentioned a list of the best tobacco pipes above, it is still your choice which tobacco pipe you prefer!

Don’t worry; the process of choosing a tobacco pipe does not have to be stressful; you will know when you have found the pipe that is right for you. Once you hold it in your hands, you will feel like, “Jip, this is my pipe!”

Some facts for fun

If you have been keeping up with Dunhill, you would have seen that in 2017 Dunhills’ pipe branch changed their name to the brand Alfred Dunhill’s The White Spot. This is also an amazing pipe option if you are still looking for a tobacco pipe.

Question: What were old smoking pipes made of?

Answer: Old smoking pipes were first made out of clay.

Question: Are old smoking pipes worth anything?

Answer: Yes, a pipe that is clean is always valuable. They can range anywhere from $15 to $100.

Question: What are the old smoking pipes called?

I hope you found this article helpful and interesting. Was there someone in your family that smoked a pipe, your dad, grandfather, or maybe a great grandfather? Maybe there are some vintage tobacco pipes lying somewhere in your parents’ cupboard that you weren’t even aware of.

Do you like smoking pipe? Which tobacco smoking pipe mentioned above was your favorite? And do you prefer a certain style of tobacco pipes? Let us know in the comments below. Enjoy your tobacco product shopping.