Gilbert clocks were one of the most famous pieces of technology during the late 19th-century to the early 20th-century.

Not only were they a useful way to tell time, but featured stunning embellishments. Unlike many clocks of the era, Gilbert clocks were very inexpensive making them a sought-after option for those on a budget.

Today, Gilbert clocks have soared back in their popularity. Due to the massive amount of clocks produced by this company, it can be difficult to tell the time period when one was made. Below you’ll discover more about this intriguing piece of history and how you can date a Gilbert clock.

History of the Gilbert Clock

Gilbert clocks were designed by the Gilbert Clock Factory starting in 1828. The brand was founded by William Lewis Gilbert who bought a small brick building in Winchester, Connecticut to serve as his factory.

Over time, the company went through various owner changes and visions. It wasn’t until the late 1800s that Gilbert clocks started to boom. The business began to create various models for consumers to enjoy and soon expanded to larger factories.

In 1907, a recession hit which almost caused the company to go bankrupt. It soon recovered and continued to sell its clocks through the 1920s.

Eventually, the company’s popularity started once again to dwindle, especially after the Great Depression struck. To prevent further losses, they decided to focus on creating smaller and cheaper clocks, including those that used paper mâché pieces rather than metal. Despite this adjustment, the new clocks never gained traction and the company went into bankruptcy. The business was later sold in 1964 to Spartus Corporation.

How to Date a Gilbert Clock 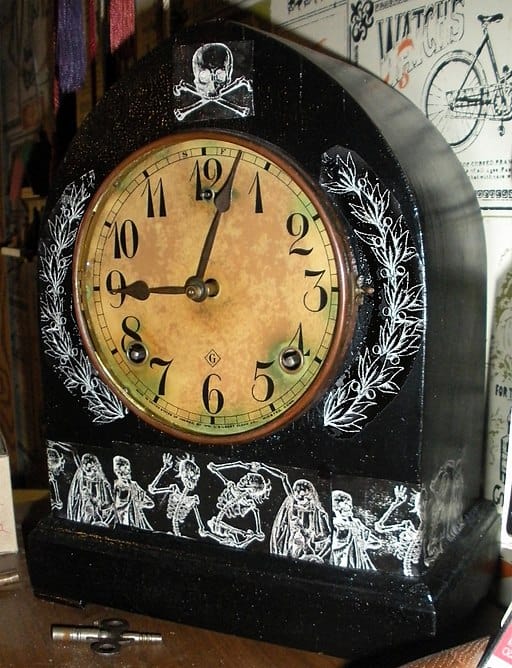 The best way to tell a Gilbert clock’s age is to inspect the back of it. You should see a label displaying the name of the company.

Because this company changed its name various times throughout its duration, the name engraved on the back will help you identify the time period it was constructed in. One of the names you might see include:

By finding the name, you’ll be able to see how long that specific one was in duration. This will help you to narrow down the age of the clock.

Tips for Identifying a Gilbert Clock

A Gilbert clock is usually easy to identify thanks to the Gilbert name displayed on it. However, there are a few other ways you can tell if the clock is from this brand or if it has been modified.

Look at its Dials and Plates

To check a Gilbert clock, do a quick inspection of its dials and plates. Unlike many clockmakers of the time, this company used steel for these pieces. Sometimes the old clock plates also have a rough pivot because of their rapid factory production.

Listen to its Sound

A Gilbert clock also stands out because of its distinctive tunes, especially if you have their grandfather clock. Depending on the model, the clocks were designed to copy famous sounds, including the brand’s Normandy chimes which were meant to mimic the music of Normandy’s iconic cathedrals.

Check for a Winding Key Hole

This company is best known for its brass winding clock key. This tool is necessary to reset the clocks because they’re designed with spring-loaded gears that move the hands. If these gears aren’t reset, they won’t display the proper time and could damage the clock. On the back of Gilbert clocks you’ll find a small hole where this winding key is to be inserted.

This 1800s wall clock resembles the shape of a banjo. At the top is a large clock face that is topped with a brass eagle. This is attached to a long wooden body that connects to a base that displays a country farm painting.

As its name suggests, the Gilbert ornate mantel clock was fabricated to be a stunning addition to a home’s mantle. The ornate mantel clocks came in a variety of designs making them all distinct from each other. Some were made to resemble church steeples while others had intricate nature scenes etched into their glass.

The Gilbert schoolhouse clock is a device that was to be hung on a schoolhouse’s walls. It was produced in 1910 and constructed out of a sturdy oak frame. Beneath the clock’s face was a long pendulum that swung back and forth to track time.

This magnificent clock features some of the most detailed work of any Gilbert clock. Its large disc has Roman numerals to monitor the time as well as the days of the week and month.

A small red arrow slowly winds around the clock as the days change. Beneath it is a tiny glass case that shows the tip of the clock’s pendulum and is decorated with scroll carvings.

Gilbert’s alarm clocks were first manufactured in the 1900s and included a popular model known as Winlite. The clock was built to be similar to a pocket watch and has small bells at the top that ring when the desired time is reached.

Over time, their alarm clocks went from being sturdy and handmade to a bit flimsy and more generic. Gilbert alarm clocks were very popular during World War II because they were cheap. Unlike Gilbert’s previous alarm clocks that were molded out of metal, later ones were made with a strong paper mâché casing.

The Color Clock was a unique line of devices designed by the company to move away from dark clock designs during the Victorian age to lighter and more cheerful ones. While this series varies in its colors, many of its models feature vibrant side pillars.

The Gilbert brand was one of the first to mass-produced clocks in the United States. Despite their affordability, they were made with elaborate designs and sounds that graced many homes. Today, the clocks are sought-after by collectors thanks to their beautiful craftsmanship.

Get the best deals on Gilbert Collectible Clocks when you shop the largest online selection at eBay.com. Check out Etsy's Gilbert clock selection for the very best in unique or custom, handmade pieces.