Take a trip back in time with us as we explore the ins and outs of vintage binoculars — from their development alongside early telescopes, to redesigns by notable binocular innovators, and their eventual widespread adoption by the military and general public.

By the end of this article, you’ll have a clear picture of the history, origins, and evolution of binoculars, as well as resources for where to go next if you’re looking to price or buy a pair of vintage binoculars. Let’s get right into it!

Telescopes: The Origins of Binoculars

Our earliest recorded evidence of a binocular-like device comes to us courtesy of a Dutch-German inventor named Hans Lipperhay.

As early as 1608, Lipperhay submitted a letter to the States-General in charge of patents, seeking to verify his invention of “a certain device by means of which all things at a very great distance can be seen as if they were nearby, by looking through glasses…” — essentially, a telescope with a convenient viewing port.

And the States-General’s response? Only to ask Lipperhay to make the invention suitable for using through both eyes. While Lipperhay would go on to lose his bid for a patent on this device, the historical record clearly marks the concurrent development of telescope and binocular technology. 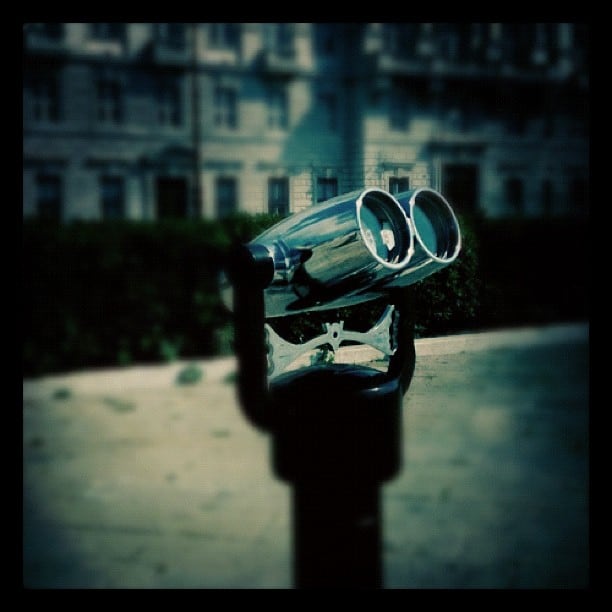 Even though the telescope became a fixture of scientific communities within 100 years of Lipperhay’s invention, it wouldn’t be until 1894 that the modern style of prism binoculars came to be. What took so long for binocular technology to catch up to telescopes? To discover the answer to that question, keep reading in the next section as we discuss the chronological development of side-by-side binoculars. 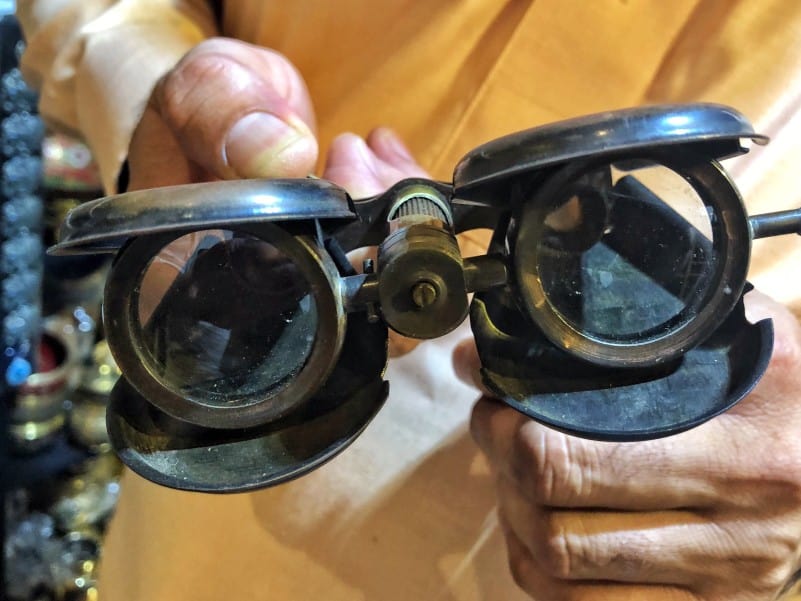 Since Galileo’s introduction of the telescope in the early 1600s, pioneering inventors sought to improve on his designs, making them more portable and user friendly. Let’s take a look through these early attempts at creating binoculars, as well as the turning point that gave us modern binocular technology.

Precursor to Binoculars: The Spyglass

Also known as prospect glasses, spyglasses may remind you of popular images of pirates sailing the high seas. More commonly, however, they were used to observe plays from the far reaches of opera seating.

Essentially a collapsible, handheld-sized telescope, the spyglass allowed for magnifications of 2-3X. They would lay the foundation for the next step of binocular evolution: Opera glasses.

German inventor J. F. Voigtländer would go on to patent the combination of two spyglasses in 1823, connecting them with a metal bridge to allow for easy holding and double-eyed viewing. J. P. Lemiére quickly improved on this design, offering an extra bridge that allowed for adjustable focusing.

By the late 1800s, widespread adoption of aluminum processing methods led to even lighter weight opera glasses, including folding and collapsible glasses. Combined with optical improvements that allowed for multiple ranges of magnification, this led to increases in efficiency that would be adopted for military use.

Once durable binoculars could be made affordably enough, European and American militaries quickly pounced on the tactical advantages given by enhanced vision capabilities. The turn of the century saw aluminum production come into its own, allowing for wider production of military field glasses — large Galilean binoculars with rugged construction that could magnify 5-6X.

These field glasses were quite bulky, though, and prone to the same problems of a small field of vision that any Galilean telescope is plagued by. It wouldn’t be until the widespread adoption of a different prism style that military binoculars would be highly regarded for their efficacy.

In 1854, Italian optician and inventor Ignazio Porro patented a reflecting prism design that would change the course of binoculars forever. By implementing a coordinated series of prisms, Porro could make binoculars that gave a wider field of vision, greater viewing depth, and clearer images.

This invention would be accompanied by the roof prism design, patented by Carl Zeiss in 1905. Similar to the porro prism, it allowed for collapsible binoculars with enhanced viewing capabilities. Together, roof and porro prisms are used in nearly every version of modern binoculars from WWII onward. 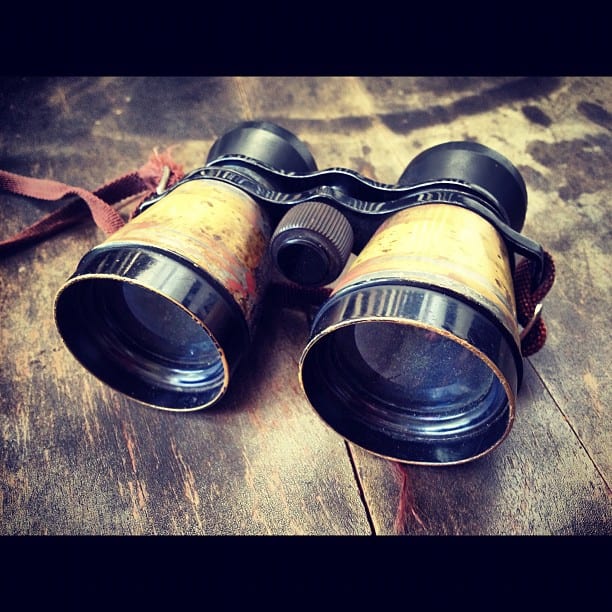 The most famous of binoculars to make use of the newly-adopted Porro and roof prisms might be the 8×60 U-boat binoculars used by the German Kriegsmarine during World War II — a staple of the roaming “wolf packs” of German boats that gave incredible clarity and field of vision. Today, these vintage binoculars are worth thousands of dollars if kept in good condition.

For American vintage binocular brands, the Sard U.S. Navy Mk 42 binoculars are a notable collector’s item. Though their 6X magnification wasn’t as stunning as the German binocular models of WWII, their clarity and field of vision is legendary among binocular collectors.

Even older than both of these, but often not quite as pricey due to their larger production numbers, Bausch & Lomb binoculars from the WWI era are fairly easy to find. They’re short, squat, and rarely offer more than 6X magnification, but remain as one of the most durable field glass designs of the era.

Can You Use Vintage Binoculars?

One of the most amazing things about collecting vintage binoculars is how incredibly long lasting they are. With few moving parts, durable components, and sometimes armored exteriors, they can easily stand the test of time — and will be just as useful as the day they were made.

In fact, many WWII-era binoculars are still highly regarded today not just for their durability, but for their impeccable viewing quality. In the past 100 years, there have been relatively few developments in binocular optics, making this era of binocular on par with modern viewing glasses.

Wrapping Up: Where to Find Vintage Binoculars

Now that you know so much more about vintage binoculars, are you thinking of starting a collection for yourself? With a bit of internet sleuthing, you can find plenty of high-quality examples of vintage binoculars without having to empty your wallet.

Here are a few of our favorite resources for finding vintage binoculars online:

Thank you for taking the time to learn more about vintage binoculars. If this article has been entertaining and informative, please feel free to share it with your binocular-loving friends!