When some think of libraries, they imagine old dusty structures that are long past their prime. Despite modern advances, libraries continue to have an important purpose in society. Not only do they hold valuable information, but the buildings themselves are often works of art and worth visiting in their own right.

And while thousands of libraries have been built throughout the United States, the ones containing bygone selections are often the most intriguing.

Below are some of the oldest libraries in the country and why they’re so remarkable.

The Oldest Libraries in the U.S. 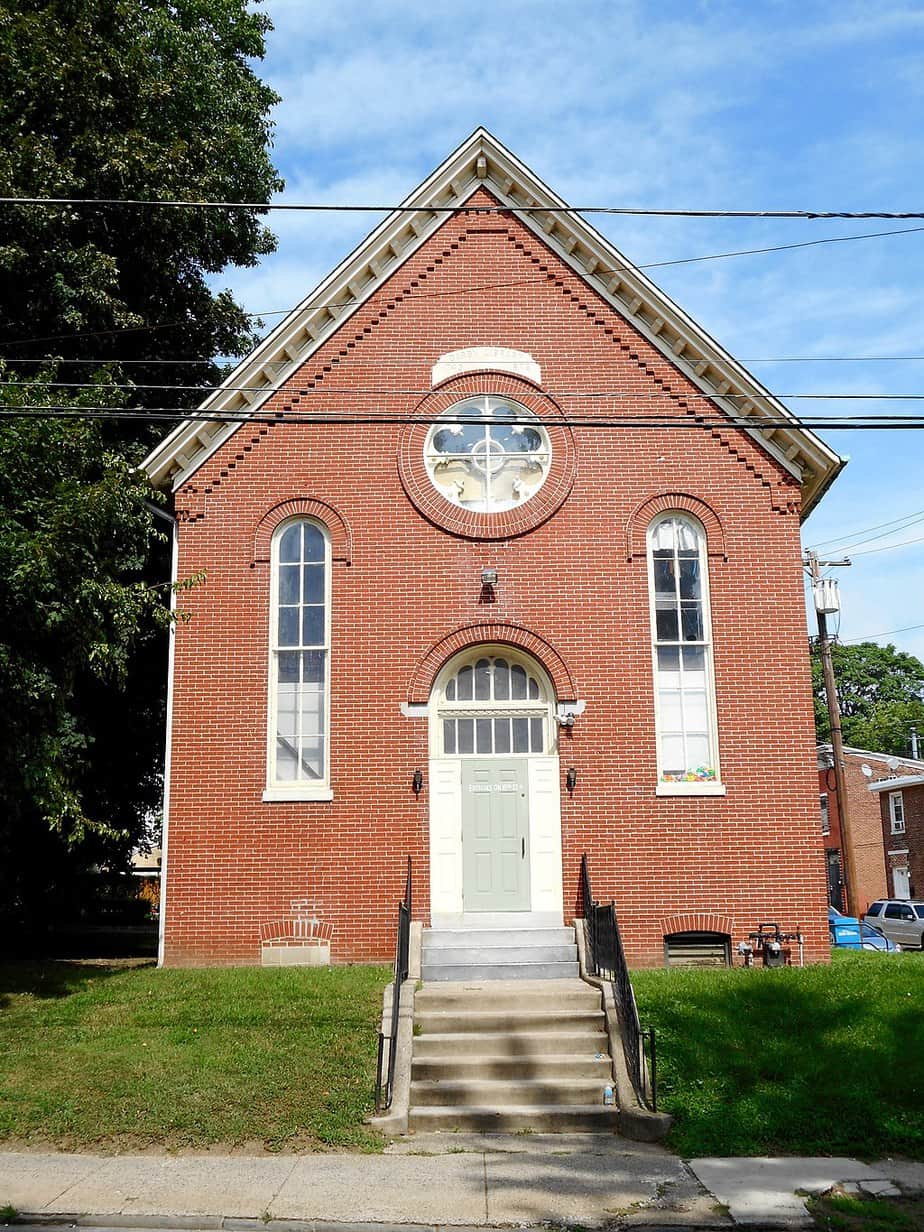 Built in 1743 by Quakers, the Darby Free Library is thought to be one of the oldest libraries in the United States. At first, a membership of around five shillings per month was required if you wanted to check out books.

During its peak, the Darby Free Library had about 230 books, most of which talked about the natural world, the English language, religion, and the history of European countries. While some have deteriorated over time, many of these antique books are still on display.

Boston Central Library first opened in 1848. It was designed to challenge larger rival libraries in New York. To help it get established, many wealthy people contributed financial or book donations. 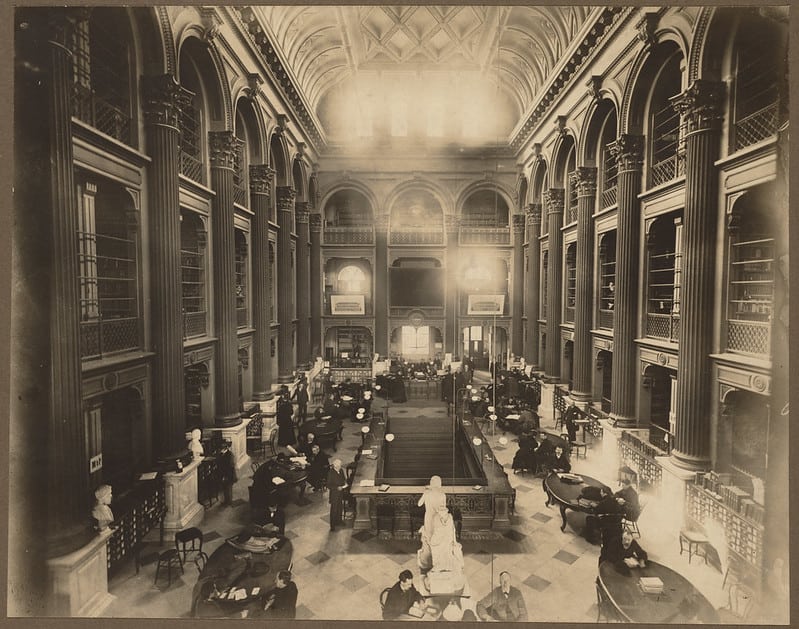 In spite of its somewhat large size, it was still too small to hold its 16,000 volume inventory so an attachment was added. As the years went on, new additions were constructed and various branches were placed around this historic city.

Nestled behind the Capitol lies the magnificent Library of Congress. It was assembled in 1800 and was originally intended to be a research facility for politicians. To get it off to the right start, Thomas Jefferson sold many books from his personal collection to fill the shelves.

In 1814 the library almost burned down completely. While parts of it were saved, many of its historic holdings were destroyed. Congress quickly rebuilt the library and restocked it.

Over the decades, the Library of Congress evolved from being only for Congress to being open to the public. It also changed its tune and started collecting memorabilia from America’s history to preserve it for future generations. Some pieces of its digital collection include:

The State Library of Iowa was constructed in 1840 and is mainly recognized for its stunning architecture. It contains four galleries and colorful ceramic tile floors. Its connected law library is particularly attractive to visitors not only for its extensive collection, but its wooden staircases, decorative chandeliers, and stained glass windows. 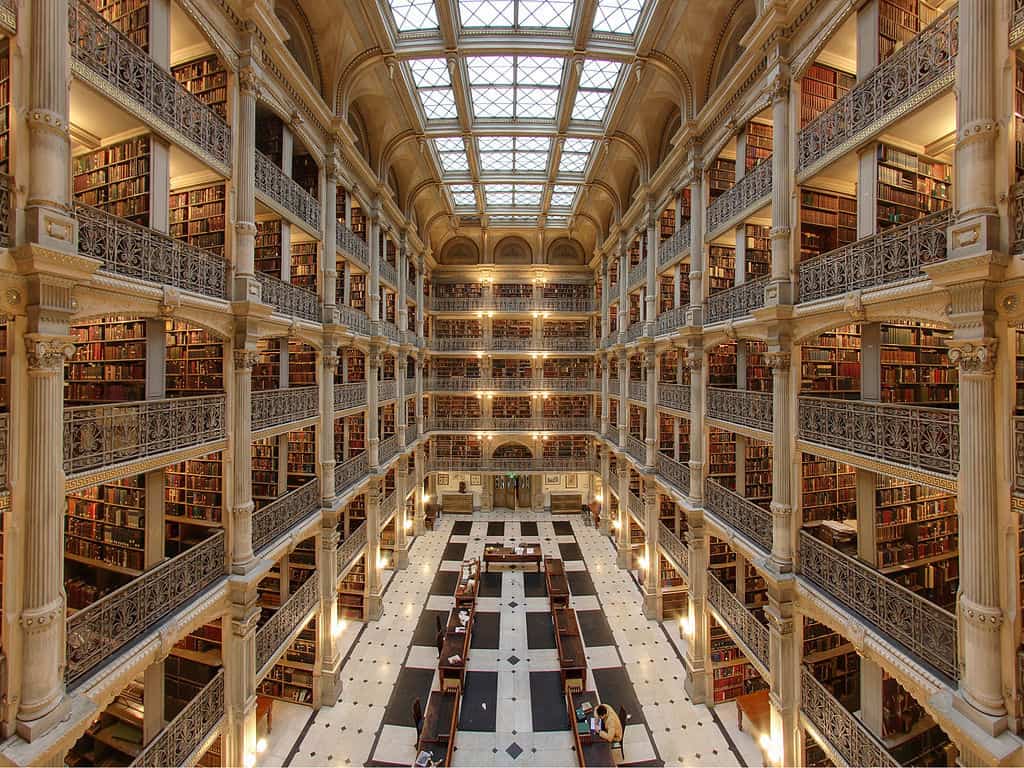 As the official research library of John Hopkins University, the George Peabody Library was donated to the school by George Peabody as a way to provide everyone in the city with the opportunity to use its free materials. Peabody desired that the establishment become a cultural center for Baltimore.

Besides its 300,000 volumes, the library is also a favorite for its appearance. It contains five levels that are encased with marble columns and cast-iron rails.

Redwood Library, built in 1747, is situated in Rhode Island and is one of the oldest community libraries in the country. Constructed by Peter Harrison, it was once overseen by Ezra Stiles – a former president of Yale University. 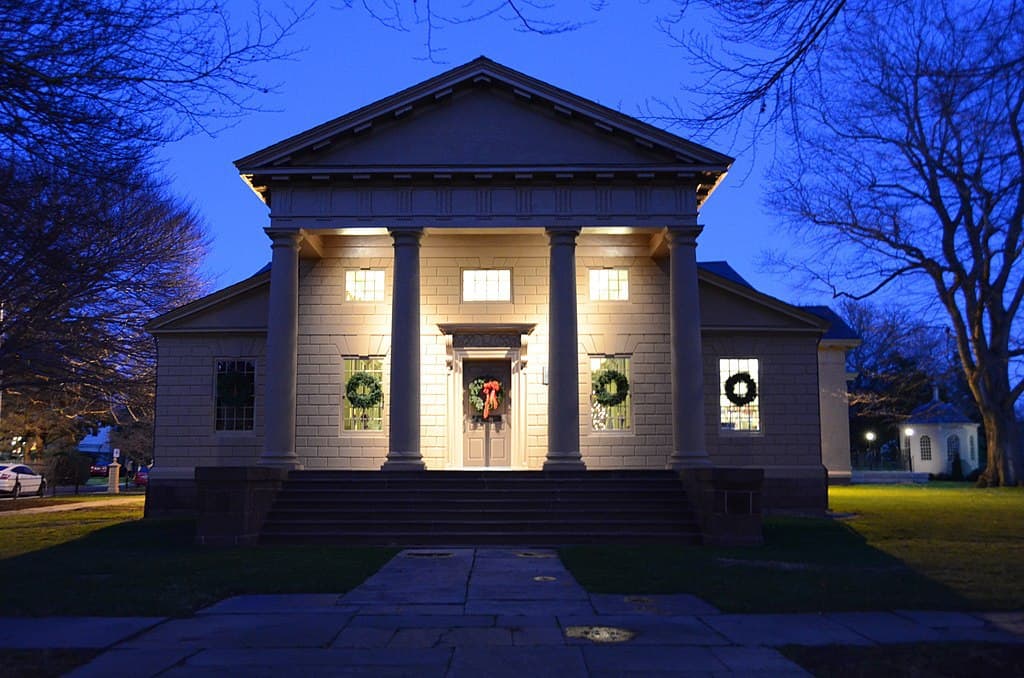 In the 1800s, locals started using the structure more and officials decided to expand it by adding a delivery room. This cleared up the library’s interior by placing certain books in a closed-off area that only librarians could access.

Los Angeles Central Library sits within the city’s bustling downtown area and has served residents since 1872. When it first opened, it was split into two sections – the reading room and the conversation room. For those who wanted a quiet atmosphere as they studied, they could use the reading room. On the contrary, the conversation room permitted chit-chat about documents and even had chess sets to play with.

Throughout the first few decades, it omitted women. While a few females were appointed as its head librarian, they were soon forced out – something which inspired major protests in the city. It wasn’t until the mid-20th-century that women were finally given the right to use and direct the library.

Besides its tumultuous history, Los Angeles Central Library has been designated a historic monument thanks to its extraordinary Art Deco style. 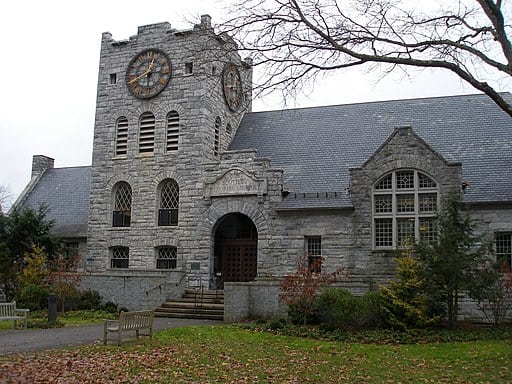 At first glance, this library could be mistaken for a small castle. Positioned a short distance away from a portion of Connecticut’s Appalachian Trail, Scoville Memorial Library first opened its doors in the late 1800s. In addition to being a peaceful place to educate oneself, the library housed various historical artifacts, including a 15th-century stone carving. The library is also known for its clock tower which chimes out every quarter-hour with a verse from the opera Parsifal.

Fisher Fine Arts Library (1890) is notable for its unique architecture. It showcases Venetian Gothic details that are carved into its vibrant red sandstone exterior. It also contains a swirling staircase that lifts visitors through its four levels that are packed with reading rooms and bookshelves. A handful of its stained glass windows are etched with quotes from Shakespeare.

This library has been around since 1891 and was founded by Dr. William Pepper. As one of the first of its kind in the city, the library started as a tiny space, something which irked visitors. Eventually, it was relocated to a larger structure and started housing rare collections. The new building featured Beaux-Arts architecture and created a large space where precious manuscripts and books could be held. Some in this library’s possession include writings by Charles Dickens and Pennslyvania German folk art pieces.

Towell Library rests within Charleston, South Carolina and made its debut in 1856. This historical landmark served as the official College of Charleston’s library until the early 1970s. During the Civil War, Towell Library had to close due to bullets piercing its roof and endangering those inside. 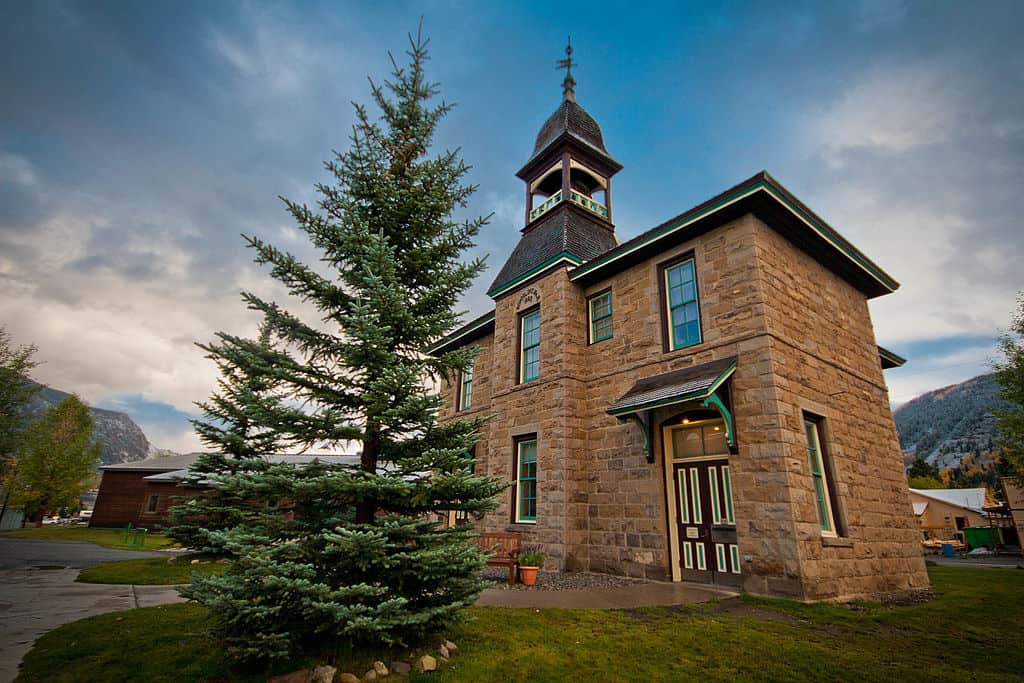 Hidden within an old 1800s schoolhouse is a small library known as the Crested Butte Library. As one of the oldest buildings in Crested Butte, Colorado, it fell into disrepair in the 1920s. It wasn’t until the 1960s that the town decided to convert the building into something useful. While they attempted to renovate it into a museum, the plan took too much time and money. In the 1980s, its new purpose as a library came to fruition.

Today, visitors can step inside this cozy space and look for books to enjoy. You can also gaze up at its old bell tower which once rang to alert pupils to hurry back inside.

Built in 1928, Camden Public Library overlooks the Megunticook River and resides within Camden’s Chestnut Street Historic District. The library was a spectacle when it first opened in this quiet coastal town. While it didn’t have a huge book selection, it featured an amphitheater and lush gardens which were created by renowned landscape architect Fletcher Steele.

Libraries are often overlooked spaces now in our modern world. Yet, they were once a sought-after place for those who needed to relax or exercise their mind. Many of these libraries are still available to the public and offer vast collections that will transport you to different worlds and times.