Since the beginning of time, humans have been fascinated with documenting the Earth’s terrain. Mapmaking became a popular profession as it allowed geographers to document new discoveries.

However, as more information was learned about the planet, it became necessary to be more accurate with the details by creating a model that properly documented the Earth’s shape and geography locations. To do so, globes were constructed.

Below you’ll discover more information about this unique tool and how it once took the world by storm.

History of the Globe

In 1492, the first terrestrial globe debuted. While small models were made before this in Greece, they often lacked details or were destroyed. Many ancient models were also celestial sphere globes rather than terrestrial ones. 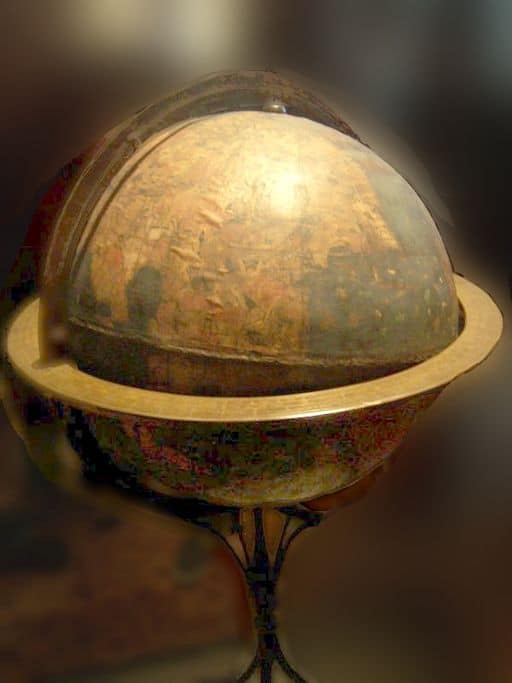 The 1492 globe, now referred to as Erdapfel, was designed by Martin Behaim, a German cartographer. To ensure accuracy, Behaim took extensive travels and used his knowledge to create a globe that reflected the discoveries of this time.

Over the years, more globes were created and new details were added as islands and countries were explored. They became an important tool for various industries, including the marine trade, as they helped sailors easily track their journey.

During the 16th and 17th centuries, Europe was the prime spot for globemaking. It wasn’t until the 1800s that America soon took over the trade.

While globes are still used today, they are mainly utilized for educational purposes or as art pieces. Unlike some antique map globes that were using a flat map, modern globe models contain textures to indicate different terrains. 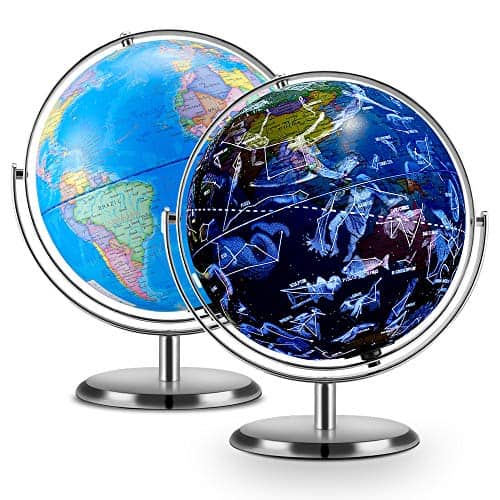 There are two main types of globes – terrestrial and celestial. A terrestrial globe highlights the different topographic maps  on Earth. A celestial globe showcases astronomical wonders and where they are located in the sky.

How Globes Were Made

How vintage globes were designed depended on the globemaker’s materials, but they all followed a basic process.

To begin, they would make a base. This would usually be of plaster, linen, or curved metal. When this was done, the base would be covered with paper-mache. After it dried, the world map could be placed on the globe.

To prevent the world map from bubbling or not sticking correctly, it would be cut into gores. These curved segments allowed the globe mapmakers to accurately place the map on the shell.

As mentioned above, Erdapfel was one of the first globes to be designed. It featured a linen globe ball base that was wrapped with wood and then a hand-painted map. Because of its early design, it doesn’t include North and South America.

It’s also known for its slight quirks, such as the addition of St. Brendan’s Island (a mythical island in the Atlantic Ocean) and placing Japan in an incorrect geographical location. 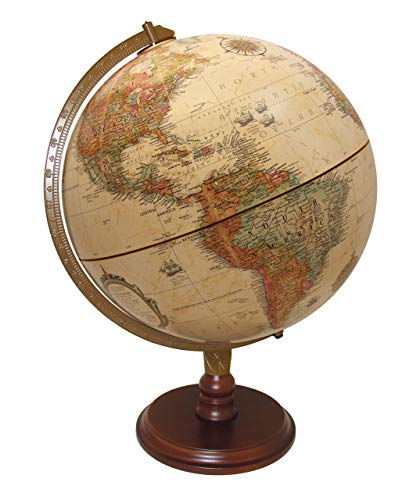 The Hunt-Lenox Globe was built in the early 1500s and is believed to be Erdapfel’s successor. Unlike Erdapfel, it has a copper base that was split into two parts. To attach them, they were strung together with a wire.

Besides its details, the world globe is famous for a small inscription beneath it – HC SVNT DRACONES – which is Latin for “Here be Dragons”. This was a common phrase to describe unexplored areas. 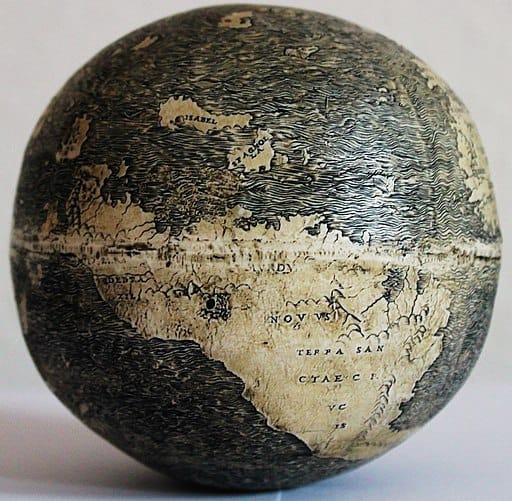 Constructed during the Italian Renaissance, and also known as the da Vinci Globe, this world globe was made out of a large ostrich egg. To keep it upright, the egg was carefully split in half and a counterweight was put into the lower part. The two pieces were then glued together. It’s thought that the Ostrich Egg Globe is the first to display the New World. 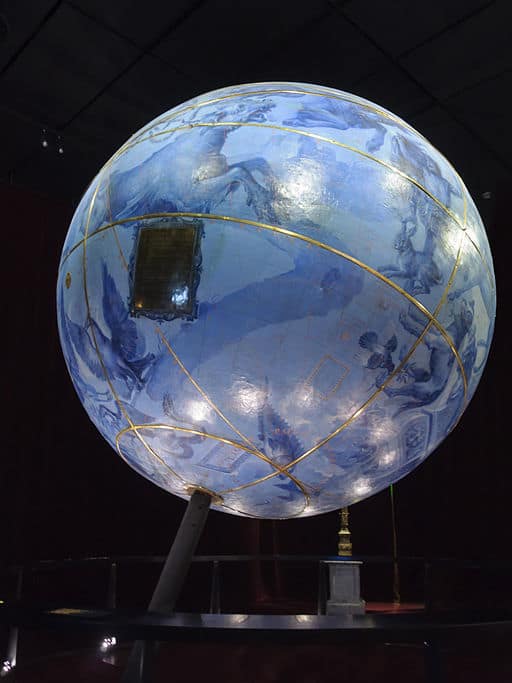 This iconic celestial globe was built in the late 1600s by Vincenzo Coronelli. The Italian globe mapmakers was a favorite in Europe and had a bustling business in Venice.

When it first entered the market, it was considered to be one of the most accurate celestial sphere globes available. Throughout the years, hundreds of reprints were created due to its popularity. 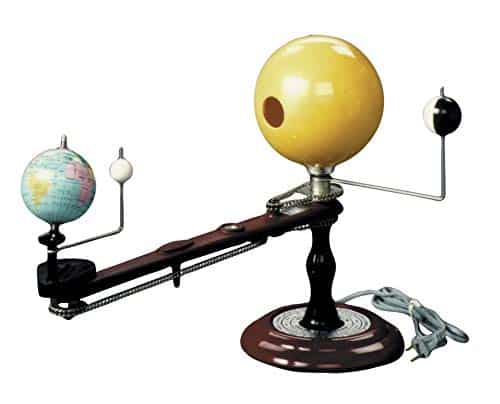 The Trippensee Planetarium was sought-after during the early 20th-century. Designed by the Laing Company, it depicted the solar system. A large brass globe ball resembled Earth and attached to it at different lengths were the planets. A user could pull a small string to move the planets to see their natural rotation. 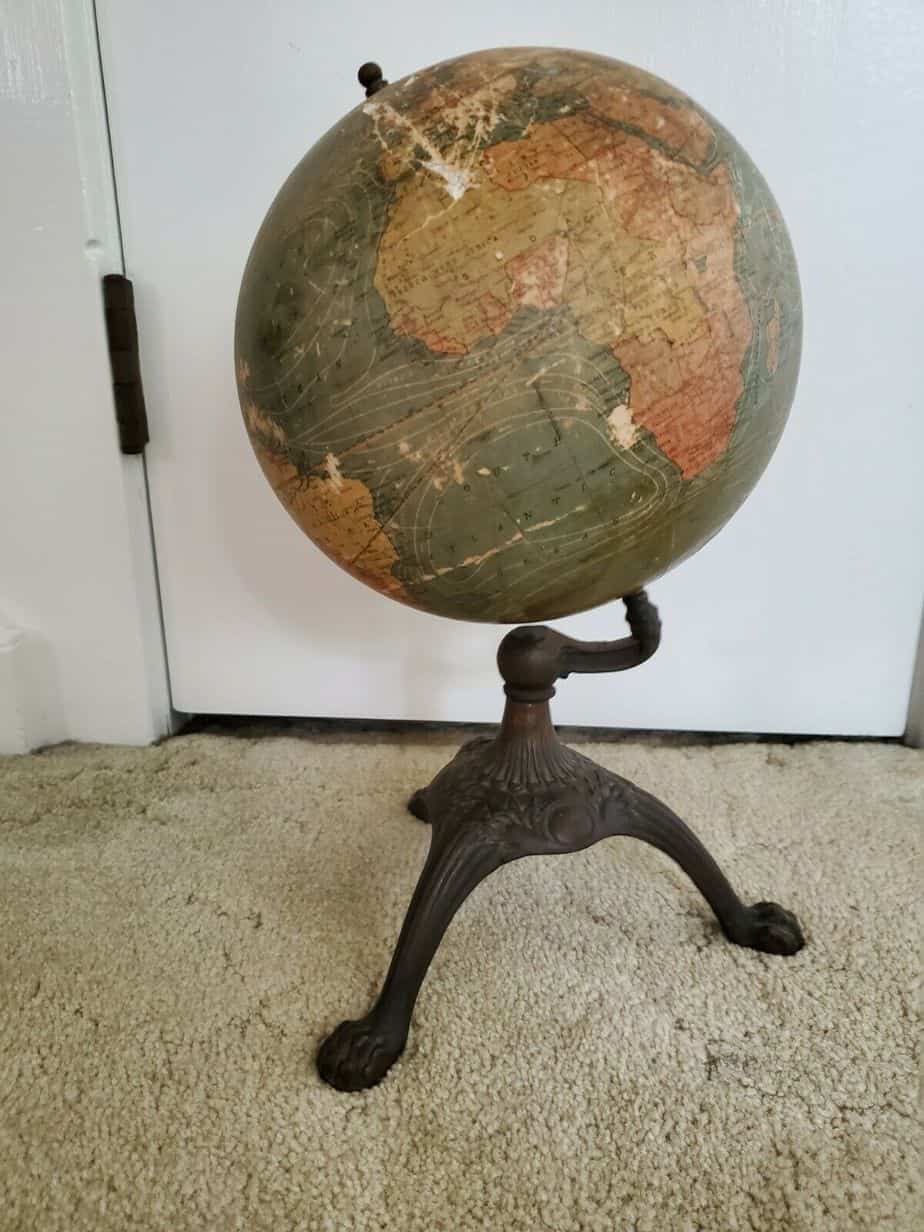 The C.S. Hammond & Company New Terrestrial Globe was printed during the 1920s and features a plaster base. It’s built into a Gothic Revival stand which allows users to twirl the globe. The terrestrial globe is extremely detailed and features not only countries, but trade winds, ocean currents, and isothermal lines.

During the 18th century, globes were in vogue, particularly in England. Rich people would carry small replicas (usually no more than three inches wide) in their pockets. When they wanted to talk about something that related to geography or astronomy, they could pull it out and discuss the topic.

This pocket globe model was small but very detailed. It contained not only the seven continent, but also the meridian ring, constellation and mountain ranges. To protect it, the globe usually came with a wooden dome it could be placed in.

Question: What is the difference between a political globe and a physical globe?

Answer: With a political globe the country and state borders are highlighted with less information about the earths physical features. Whereas the physical globe shows more details of the physical terrain. And it may show the country border or it may not.

Question: How does an Illuminated globe work?

Answer: Almost every globe is connected to its stand by a meridian. Some meridians surround the entire globe, while others may only cover half of the globe, which is called the semi-meridian.

Question: What is a prime meridian?

Answer: The prime meridian is an imaginary equator-like line that divides the Earth into the Eastern and Western hemispheres.

Question: What is meant by map projection?

Answer: Map projection is the method that is used to transfer the graticule of latitude and longitude on a plain surface.

Question: What is an atlas?

Answer: An atlas is a collection of maps. These maps can include place names, oceans, cities, and more.

There are plenty of ways you can learn more about antique globes. If you’d like to collect some, you can search online where you’ll find a vast selection.

There are a few sites that focus on making and/or collecting vintage globes, including:

You can also stop by your local antique shops to browse through their inventory. Many times, you’ll find a few models you can purchase.

For those who want to learn more about the history and uses of globes, you can contact a historian or stop by a history or science museum. They can often give you some interesting tips and guide you to helpful websites and books.

Globes may no longer be heavily relied upon, but they still serve as an object of fascination. They not only allow us to track when and where new destinations were discovered in history but can help us better understand our world and the beautiful landscapes it contains.