Walkie-talkies and two-way radios are so common today that most pay no attention to them.

However, at one point in history, they were considered to be one of the most advanced pieces of technology.

Below you’ll discover more information about the history of these unique devices and how they have shaped modern communication.

The History of Walkie-Talkies

Walkie-talkies were invented in 1937 by Don Hings, a prominent Canadian inventor.

They were originally designed to help commercial pilots safely communicate with each other but soon found a new purpose when World War II erupted.

His patent was kept a secret by the Canadian government so they could quietly work alongside the British during the war.

During the war, various inventors upgraded the walkie-talkie. One notable person was Al Gross.

Gross worked alongside Motorola to improve on Hings’s design by trying to increase the frequency above 100 MHz so it could reach a longer distance.

Eventually, this device became portable. By placing a few dry batteries inside, the walkie-talkie could be carried around by soldiers.

During the late 1960s, hobby models were invented for kids. While not powerful, they allowed them to speak with another who was no more than 200 feet away.

Today, walkie-talkies are equipped with impressive features and are used by everyone from security personnel to event planners. They have also been revamped to have modern settings, like a flashlight, microphone/speakers, and weather alerts.

Are Walkie-Talkies and Two-Way Radios the Same?

These devices are very similar to each other but have a slight difference.

A two-way radio, also known as a transceiver, is one that can both send and receive signals.

Unlike a walkie-talkie, two-way radios are bulkier and must be secured to a platform.

It’s much smaller and can be slipped inside a bag or pocket.

How a 1970s Sunspot Affected the Development of These Devices

During the 1970s, a strong sunspot helped developing radio communication improve because it affected the HF bands which increased the walkie talkie’s power.

This helped researchers better understand how these devices work and discover ways they could modernize their design.

During their studies, they found that advanced satellites were the answer to better frequency as they were reliable and provided fast results.

Types of Walkie-Talkies and Two-Way Radios

This two-way radio was commonly referred to as a walkie-talkie in the 1940s despite it being worn as a backpack.

Over 50,000 were created and sent to troops in the Pacific Theater and Europe.

Thanks to its design, it’s thought to have helped prevent many casualties during the war because it quickened communication.

This is especially so with the Battle of the Bulge which helped troops to quickly hide from enemies and ensure they had enough artillery sent.

While it was useful, it also had a few drawbacks. The main one was its battery power.

Because of its size, it needed replacement batteries often as they only lasted about 25 hours. If a soldier didn’t have any or didn’t radio in time to receive more, they could face huge trouble.

In addition to this, the two-way radio was heavy.

It weighed around 35 pounds and had to be hauled around on one’s back.

As one of the first walkie-talkies, the Model C-58 Pack Set was specifically designed to assist soldiers during World War II.

Thousands of them were manufactured and sent to Europe to help soldiers safely communicate with each other. 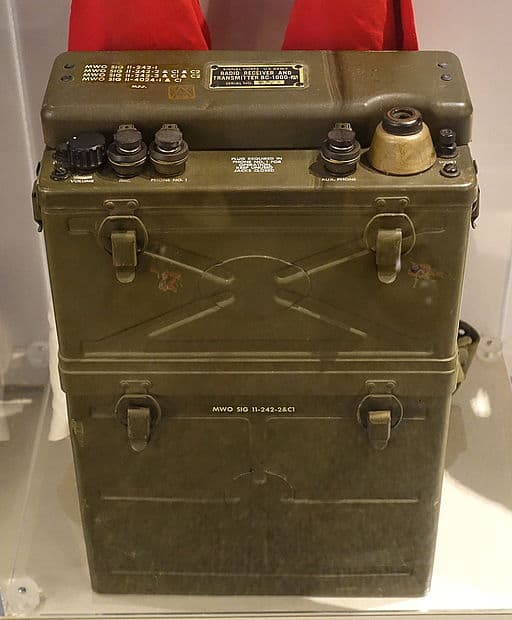 To prevent enemies from hacking into the system, the Model C-58 Pack Set came with an impressive set of features for the time.

These included tall antennas for optimum power, a special filter that blocked background noise, and a voice scrambler to prevent eavesdropping.

This device was used by the U.S. Army during World War II. Known for being one of the first hand-held models, over 130,000 SCR-536 units were used to help conduct many important missions, including the famous invasion of Omaha Beach in Normandy.

To prevent enemies from noticing it, most fighters hide the device in a sock.

To ensure it withstood the heavy-duty work, this model was equipped with a waterproof casing and a low antenna to prevent blocking other radio signals. It could reach another walkie-talkie that was 1-3 miles away.

The SCR-536 had a telephone-like receiver built into the front that allowed one to both listen to the message and respond. It was mainly used by soldiers to help them communicate with their commander.

While it was built for tough work, the technology at the time wasn’t the best.

Because of this, the device’s battery was prone to damage due to moisture and dirt. Sometimes the signal could also be blocked if a soldier walked through hills or tunnels.

The AN/PRC-6 was an essential tool for soldiers during the Korean and Vietnam Wars.

Commonly referred to as the banana radio, it eventually became popular worldwide and countries like Israel and Germany used a license to manufacture the device.

The AN/PRC-6 has a crystal oscillator which needed to be re-tuned after one adjusted its frequency.

While it was helpful during the wars, it had a few drawbacks, including limited power and a poor range. Because so many were produced, it’s still commonly found.

Designed in 1962, the Continental TRC 1036 used a superheterodyne receiver and contained a permanent magnet dynamic loudspeaker.

Measuring less than eight inches long, this portable walkie-talkie could be put inside its leather case for security. It also had an earphone jack.

This device was one of the first cell phones to be made and its design was inspired by the walkie-talkie.

First manufactured in the early 1980s, the Motorola DynaTAC 8000X was a large phone that featured numbers on the front for users to dial.

Once these numbers were punched in, the user could hold it up to their ear and talk into it. To improve the signal, there was a tall collapsible antenna built into the top.

While still used around the world for this purpose, it’s also needed for recreational purposes.

Thanks to their technology, they have helped inventors learn more about artificial communication and have paved the way for modern tools, like cell phones.