Every day, I try not to take for granted the technology that enables me to use my smartphone in the 21st century, but many of us do.

I don’t know about you, but there are 4 basic functions of the modern smartphone that I use the most:

However, these functions came a long way and were never made just for the smartphone.

If it were not for the invention of photography, the typewriter (originally the typographer), the microphone and the gramophone in the 19th century, the amazing piece of technology we hold in our hands would not exist today.

We owe it to ourselves to take a closer look at the inventions, and the 19th century scientists and inventors who did the thankless work that gave us the functions of the smartphone; these great minds invented the technological ancestors of this technology we enjoy daily. 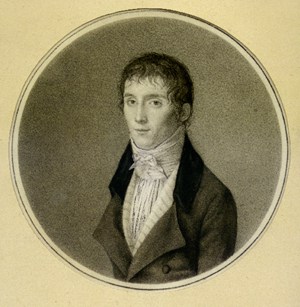 The first photograph was taken in 1829, in France, and to see it is a far cry from the quality we would even consider from some of the earliest camera capable phones from the late 20th century.

In the first photo, called ‘View from the Window at Le Gras,’ you can see a blurry photo of two buildings and a garden taken from the window of Niépce’s window in the Burgundy region of France.

This process is called heliography. The first photo was the result of supposedly obsessive research completed by Niépce, which he started in 1817.

After his successful rendering of the first photograph in 1826, it was largely forgotten for over a century: “This first image only became famous in 1952, when it was rediscovered by the photography historian, Helmut Gernsheim.”

Thanks to Gernsheim, the first photo was able to be circulated in the press and credited to Niépce.

How the Camera Obscura and the Heliograph worked together 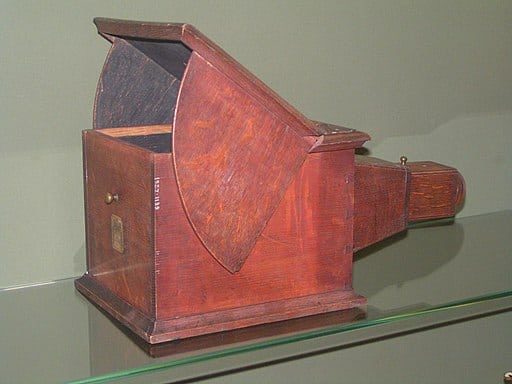 The first photo was taken with the help of two integrated inventions called the camera obscura, and the heliograph. The camera obscura works by having a small pinhole that lets light come into a darkened box or room; the result is the image projected on a wall or object, but it is inverted and upside down!

The heliograph was invented by Niépce to work with the camera obscura; a piece of pewter plate was set inside the camera obscura. A thin layer of lavender oil bitumen was on the pewter; this oil was sensitive to light.

The camera obscura was placed in the window facing the courtyard, and after being exposed to sunlight for several days, the impression of light and shadow was made on the plate with the bitumen. This process was called heliography because it quite literally means “sun writing.”

Who was Joseph Nicéphore Niépce?

Joseph Nicéphore Niépce was a French inventor who was born and raised in France. He was born Joseph Niépce in 1765, but later renamed himself to Nicéphore.

He had military experience as a young man, but then settled down after completing his military service and began working on inventing with his brother Claude.

He was a very prolific inventor outside of the field of photography. Unfortunately, Niépce died suddenly in 1833, and none of his inventions were acknowledged during his lifetime.

Related: Interested in vintage photography? Dig deeper and learn about the story of the Polaroid Camera and the History of the 35mm Camera 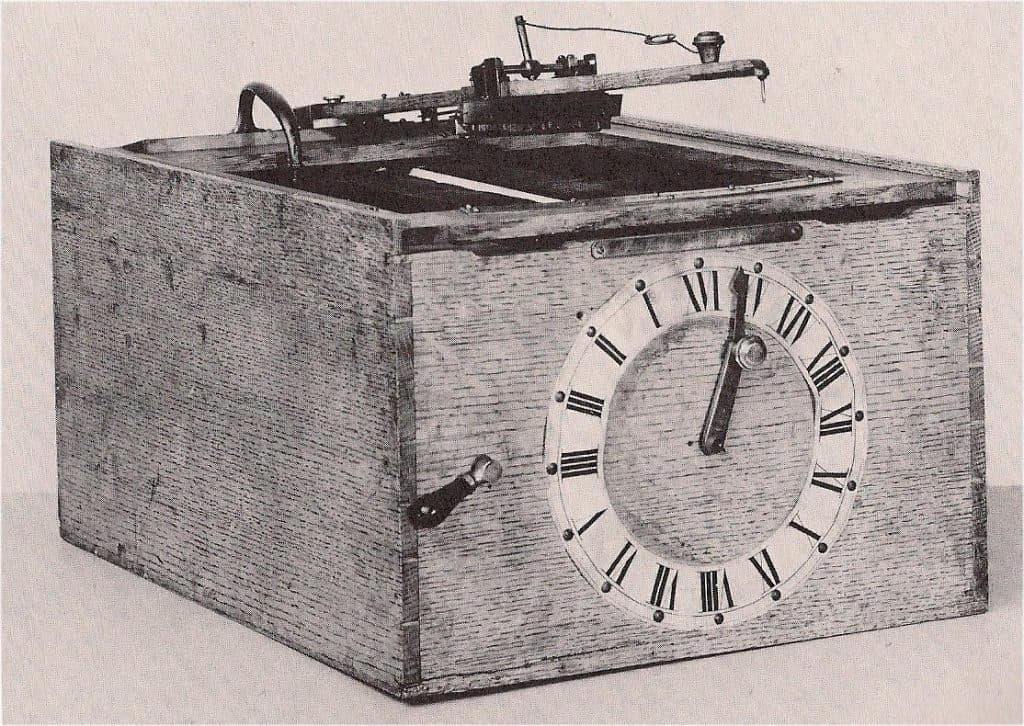 A New Way to Write: Inventing the Typographer

The predecessor to the typewriter was called the typographer.

It was patented on July 23, 1829 and was invented to help office workers save time, as he had observed workers in his office spending a lot of time writing important documents by hand.

Burt already had an interest in mechanics, math and science, so he was able to make his idea reality with this knowledge.

The result was the typographer; if it had not been for the typographer, we would not have the typewriter that we know of, and the keyboard we type on daily on the smartphone today.

Functions of the Earliest Typographer

The typographer did not function or look like the typewriter or the qwerty keyboard we are used to seeing in our smartphones today, and it didn’t even save time like Burt had intended it to be: “The machine that Burt invented was cumbersome and difficult to use.”

The typographer itself was a wooden box, and inside the box was a swinging lever that would depress, and it was connected to a sector underneath the swinging mechanism.

The lever would impress upper and lowercase letters onto rolled paper inside the box, then a sheet of rolled paper would be dispensed from the box. The paper could then be torn, much like a roll of paper towels!

Unfortunately, the typographer never took off or was very successful at the time.

What we can say for the typographer is that it paved the way for the typewriter that would be patented in 1868, but it was ahead of its time; Burt didn’t even make money off of the invention, either…

Yet another innovative mind that went without recognition in the 19th century.

Who was William Austin Burt?

William Austin Burt was an American inventor who wore many hats in his life, much like many other contemporary inventors in the 19th century.

He was born into a Massachusetts farming family in 1792, and despite having limited access to education, became more than just sufficiently versed in math and sciences.

His education served him so well that he became a millwright; that’s a high-precision craftsman!

He also served in the United States Army in 1812, and he also held public offices and was a surveyor as well. 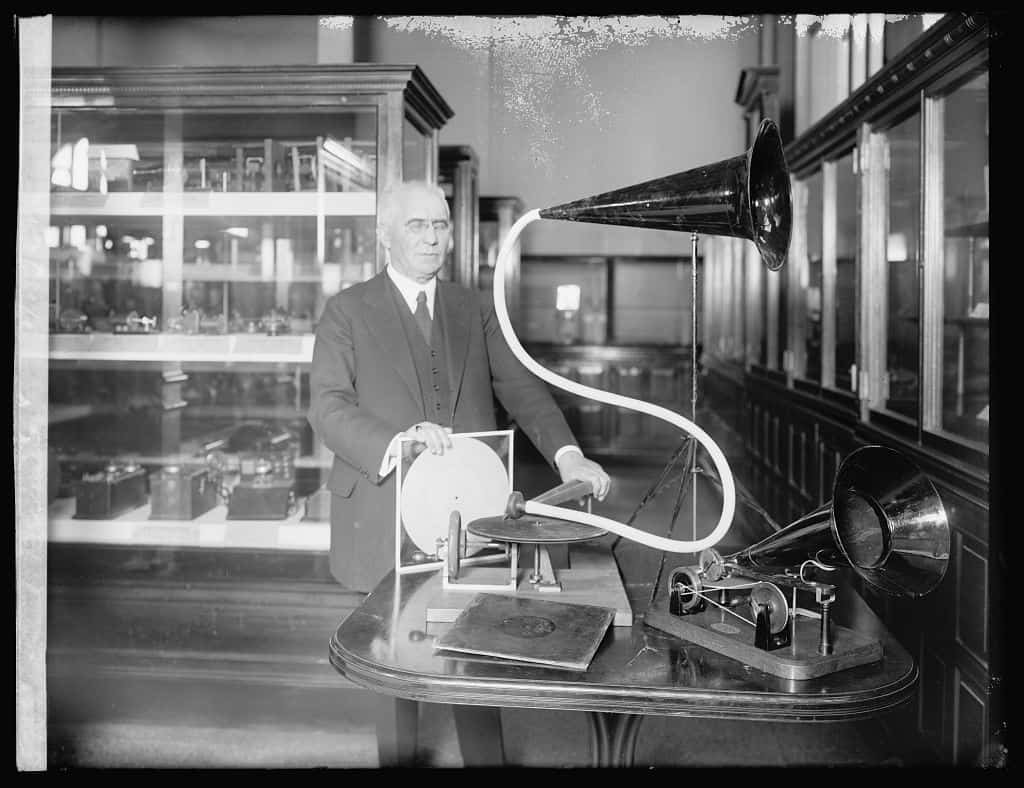 Say It Again: The Invention of the Microphone

Emile Berliner developed an improved microphone after first failing to initially invent one, then becoming fascinated with the telephone invented by Alexander Graham Bell.

He was inspired to make improvements to the microphone after seeing a demonstration by the Bell Company in the U.S. Centennial Exposition.

Alexander Graham Bell had earlier created a microphone, but it was impractical and sounded terrible, as the original design suspended a diaphragm over a pool of electrified water!

Berliner improved on this original microphone design after only six weeks of experimentation in his apartment!

Berliner later went on to work with Thomas Edison and patented a microphone that would be released in 1877, and he eventually was given $50,000 by the Bell company to work for them! That’s the equivalent of over $1 million dollars today!

The bad news is, Edison later got the credit for the patent: “But controversy dogged the patent, which was eventually thrown out, much to Berliner’s dismay. The U.S. Supreme Court ruled in 1892 that Thomas Edison, and not Berliner, invented the carbon microphone.”

Berliner has rightfully been given credit for his contribution and design for the improved microphone.

Functions of the Earliest Microphone

The microphone that Berliner developed was first based on a microphone design developed for Alexander Graham Bell’s telephone.

Berliner’s ideas that he developed with Thomas Edison improved the microphone in two ways:

After talking to a friend who worked at a telegraph station, Berliner realized he needed to create a stronger current for the waves to be transmitted, so that the waves would not fade when reaching the device; the microphone worked when a steel wire was connected to a battery and an induction coil.

Berliner was able to improve the microphone design that used Bell’s magneto receiver and now his microphone transmitter.

Music to my Ears: The Invention of the Gramophone 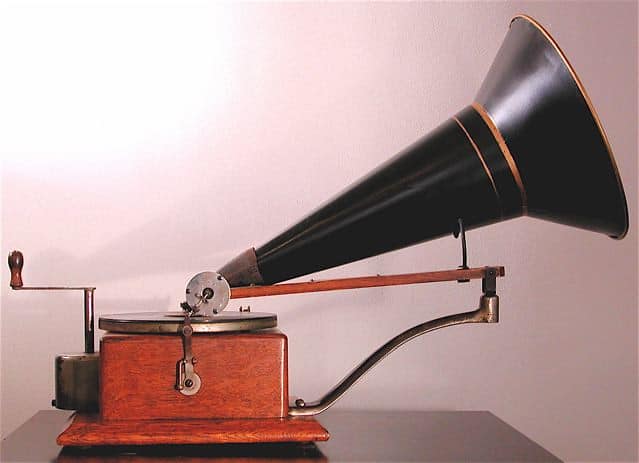 Another great achievement of invention by Berliner was the invention of the gramophone. His gramophone was also called the Berliner Phonograph.

Berliner patented his invention of the gramophone in 1887, and the gramophone was special because it ushered in the era of music and sound being recorded on flat disks known as records.

Before, sound was recorded on glass cylinders. Berliner’s recording disc design was based on work involving voice recordings on discs for visual study completed by Leon Scott for his phonautograph.

Related: Learn more about the phonograph

The gramophone would produce sound by reading a rotating disc. The disc was read by a needle that would travel along grooves inside the disc.

The earliest discs for gramophones were made of zinc, made with beeswax and a cold gasoline mixture.

After the disc was processed, it would be covered in an acid bath that would allow the needle to smoothly move along the disc and read the vibrations that were fixed in the disc from the audio recording process.

After more trial and error, Berliner’s discs were eventually made of hard rubber and produced by the Duranoid company.

Who was Emile Berliner?

Emile Berliner was a German-born inventor, scientist, entrepreneur and researcher who became an American citizen in 1881.

He first immigrated to the United States when he was 19 years old, and astonished the world by only having a public school education. With his successful invention of the improved microphone, he landed a job as a chief engineer at the Bell Telephone Company.

He worked quietly most of his life and reportedly did not receive much recognition for his work, but his crowning achievement continues to be the microphone; rightfully so, as it has changed our lives for over 120 years.

His invention of the gramophone also helped to develop the recording industry as we know it, as his entrepreneurial approach to marketing the device involved enlisting recordings by famous singers of the time, Enrico Caruso and Dame Nellie Melba. Recordings by these popular artists helped to market the new gramophone.

Functions of the Smartphone: On the Shoulders of Giants

If we forget about the camera, the typographer, the microphone and the gramophone as technological ancestors of the smartphone today, we fall prey to complacency and taking the hard work of these brilliant inventors for granted.

In fact, these men were almost completely forgotten and are not common names on our lips like Thomas Edison and Alexander Graham Bell!

We cannot forget the great progress that was made before us, according to Sir Isaac Newton, who once said: “If I have seen further, it is by standing on the shoulders of giants.”

So, each time you open your phone to send a text message, take a photo, or make a phone call – don’t forget the inventions that came before to make the functions of this technology possible!