When the telephone was created in 1876, it inspired many inventors to improve upon its basic design. One of these improvements was the rotary dial telephone.

This device led to more independence when calling someone on the phone and allowed homeowners to install telephones in their living space.

Below you’ll discover more behind what the rotary telephone is and how it has made its mark on history.

What is a Rotary Dial Phone?

A rotary dial phone was one of the first telephone models widely available to consumers. It allowed them to contact a person themselves rather than through an operator.

While it went through many design changes, it’s best known for its dial. By twisting this dial around, it would send pulses to a specific receiver registered to the number one was calling.

The rotary dial phone became such a sensation in the early 20th-century that the phrase “dialing the phone” was added to English vocabulary.

A Brief History of the Rotary Dial Phone

The rotary dial phone was created in 1891 by Almon Brown Strowger.

In his original design, the telephone featured a three-inch wide dial that listed numbers 1-9. As the user moved the dial, pulses corresponding to a specific number would be sent.

Strowger sold his design to the American Bell Telephone Company who mass-produced this then-modern marvel.

At first, the rotary dial was built with small metal pieces on the numbers to turn it. However, this was soon replaced by holes that one could insert their finger into.

Over time, this phone was installed in most homes. It continued to be made until the 1980s when more advanced phones, such as the cellphone, started to become popular.

Related: Check out some of the best vintage phones you can find today…

How to Use a Rotary Phone

To use a rotary phone, simply pick up the phone receiver and insert your finger into the number holes. Depending on the number you need to call, you’ll need to move your fingers around to different slots.

As you do so, turn the dial until it clicks against the metal stop on the side.

Once you’ve entered all the numbers, release your finger so that the phone can transmit your call. After you have made your call, set the receiver back on the phone to end it.

Can You Still Use a Rotary Phone? Are They Still Made?

You can use a rotary phone today as long as it’s connected properly to an electric source.

However, some telecom providers might not deliver service to this unique type of phone because it sends pulses to a number, not strong electrical signals.

Rotary phones stopped their mass production during the 1980s when newer and more advanced phone models were entering the market.

While contemporary models aren’t being made, many vintage rotary phones have been restored so they are in perfect working condition. 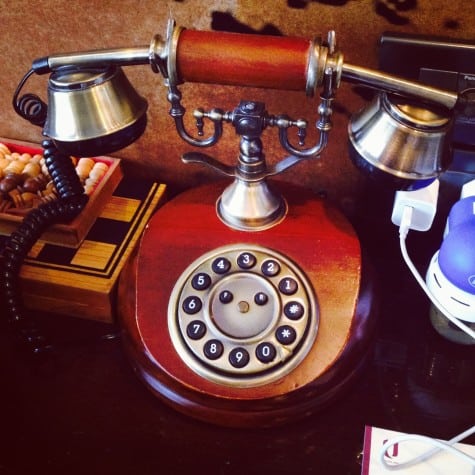 As one of the original rotary phones, the Candlestick Model 50AL made headlines in 1919 for being the first free-standing rotary phone.

This product has a long candlestick-like neck that has a number dial on the bottom and a large mouthpiece on the top. Attached to the side is a handset that connects to the receiver with a long wire.

Created in 1927, Model 102 was a step up from the Candlestick. Instead of having an extended neck, it features a round base with a receiver placed on top of it horizontally. Because of the large base, the dial on the front is much bigger and easier to access.

Unlike previous rotary telephones that were cast out of metal, this one was made with plastic. Its base also contained all the circuit wires which made it very compact.

This rotary phone model first entered the production line in 1949. The Model 500 was even more advanced with its technology thanks to an embedded bell ringer inside its base.

This model was also one of the first to offer regular buyers a designer color series.

Rather than purchasing a traditional black telephone, customers could choose one in yellow, green, turquoise, brown, or red.

Also known as the Princess Phone, this rotary telephone made its appearance in the 1950s and was mainly marketed as a cute bedside device. It was much smaller and featured a dial light. This rotary phone came in colors such as light yellow, white, and pink.

The last of the rotary phones, the Trimline Model 220 hit the market in the mid-1960s. Unlike previous models, this phone has a small rectangular base that the receiver is placed on. Its receiver contains the dial and the base contains the ringer.

Rotary telephones might be an invention of the past, but they have led the way to our current smartphones. While no longer produced, vintage models can still be hooked up to modern outlets and used.