Lanterns have become a staple of primitive style decoration in the past twenty years or so, but there was a time in history that the use of lanterns would be the primary way of seeing around your home, and even the world around you.

Lanterns are generally protected sources of light that aren’t generated from electricity, and can be easily transported.

So, what is the history of antique and vintage lanterns? What were the primary types and styles of lanterns used?

And, finally, are any still used today?

Let’s take a look at the tool that helped us to see for hundreds of years; who knows, perhaps you’ll see a lantern that you have in your home that you’ve taken for granted. 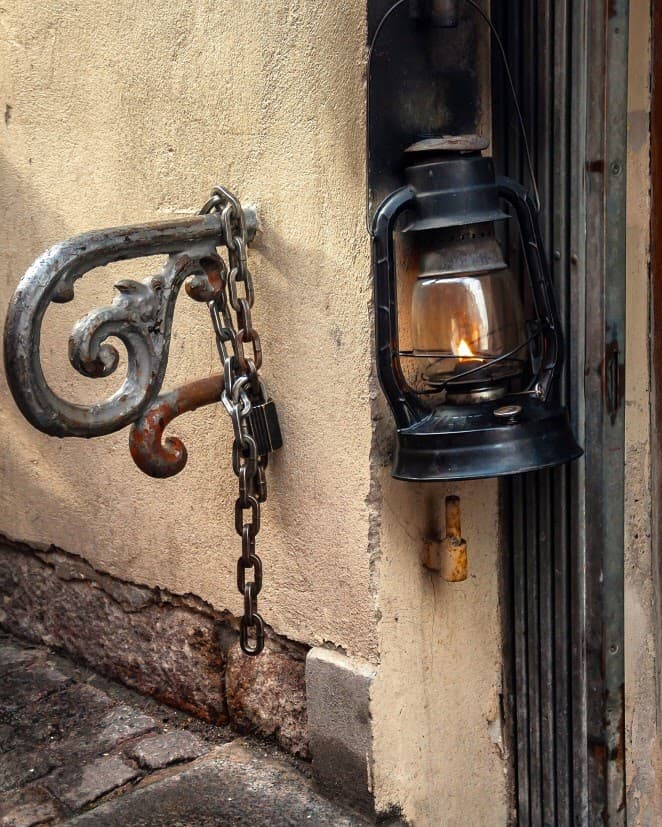 Records of lanterns exist in writings from the time of ancient Greece, Egypt and China. The materials used for creating lanterns may have changed with each passing century, but the purpose of their use has not; even when it comes to religious ceremonies.

Lanterns are used to help us transport sources of light from one place to another, inside a translucent or opaque container made of a variety of materials. We’ve become much better at creating lamps that are much safer to help us see, and are more pleasing to the eye.

How and when lanterns first came into use 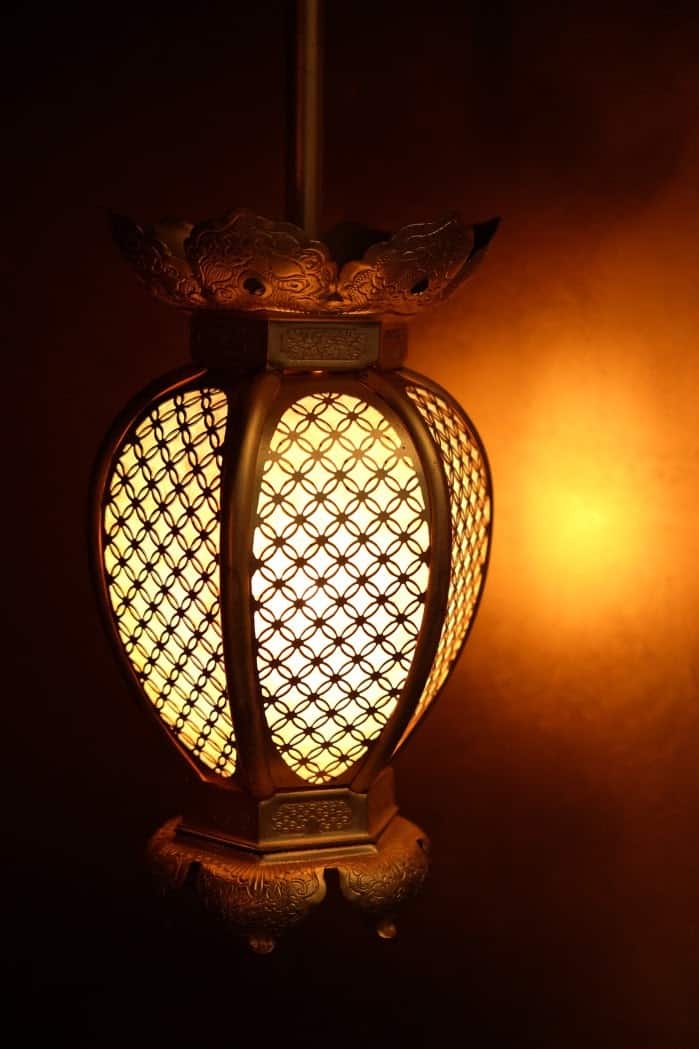 Some of the first accounts of lanterns being used are recorded in writings from Ancient Greece. They were also used in parts of Africa, Egypt and China as well. These candles generally protected the light source; the light source was usually candles and oil lamps were eventually invented as well.

Innovations in lanterns began to happen in the 16th century and up until the beginning of the 20th century.

Lanterns made during this time period in Europe were made to accommodate the use of whale oil, kerosene and candles.

Lanterns began to be mandated for public use to illuminate streets in Europe, and they were also used by guards called “watchmen” to help deter crime at night during the 19th century in the United States.

If you look to buy a lantern at a retail store, most of the lanterns you can buy are replicas from this time period. You may have even inherited some antique and vintage lanterns and lamps from your grandparents.

Let’s delve further into the construction and types of lamps to discover more.

Lanterns have been made with a variety of materials throughout history using paper, wood, bamboo, animal hide, terracotta or clay.

Before electricity, popular light sources in lanterns would be a candle, or a wick soaked in nut oil, fish oil, olive oil, kerosene or whale oil.

Kerosene lamps are still popular non-electrical light sources used today, if your power happens to go out or if you’re out roughing it on a camping trip.

Types of Antique and Vintage Lanterns 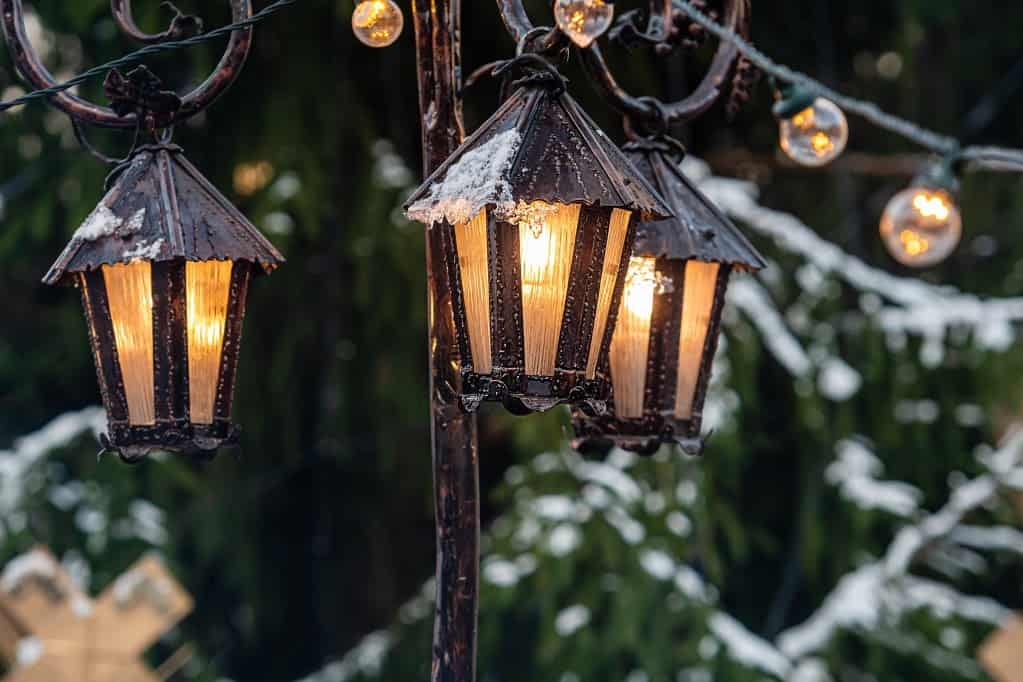 In industrialized nations, it’s not likely to see antique and vintage style lanterns used today without the aid of electricity.

The use of antique and vintage lanterns were popular for 3 reasons:

There are many types of antique and vintage lanterns that have been made, but we’re going to limit our guide to some examples of the following types: paper lanterns, oil lanterns and kerosene lanterns.

Let’s take a closer look at some examples of these types of antique and vintage lanterns. 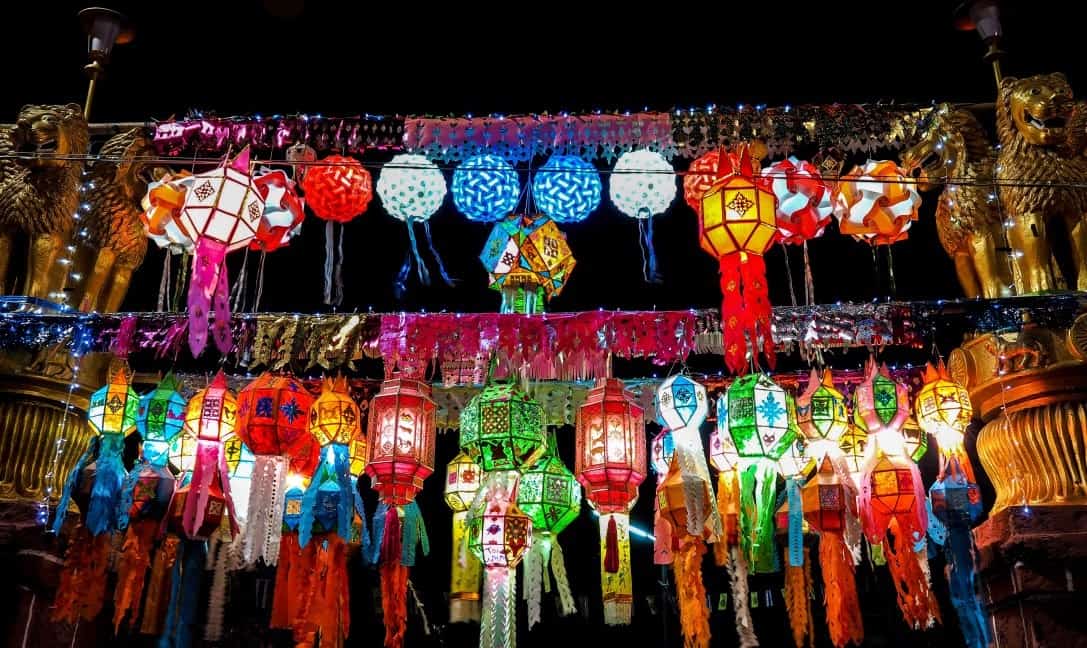 Paper lanterns have been frequently used in China for a large portion of recorded history. Paper lanterns for the Chinese people have not changed drastically since ancient times.

The most popular paper lantern style from China is called the Suzhou-style Lantern.

These lanterns are traditionally and continually ornate in their design, and can be made in a variety of shapes beyond the spherical lantern shape.

In a less ornate but equally important fashion, it’s recorded that Americans in the 18th and 19th century used paper lantern coverings over candles to provide light.

During the Civil War, it was especially important for soldiers to have paper lanterns: “Soldiers in the Civil War had nothing but candle lanterns to use, designed specifically so the wind would not blow out the candle light when the men were in the open.” 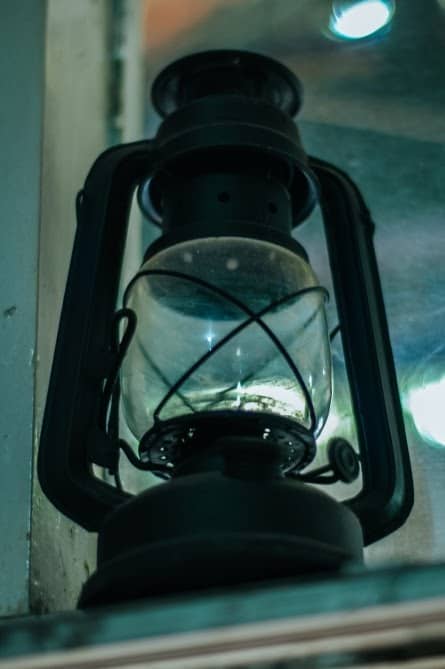 Oil lanterns were used about as popularly as candle lanterns, but obviously more durable and were able to provide a brighter light.

These antique lamps and lanterns would frequently leak oil. Two of the most popular styles of oil lamps used during this time were the Betty style lamp, and later the center draft lamp. Oil lamps even became a status symbol once whale oil was developed and used for lighting.

The Betty lamp was designed to be an improvement on the cruise style lamp, and was widely used during the 18th and 19th centuries. It was made of various types of metals, such as tin, copper or bronze.

There was a wick holder in the base of the lamp that would be covered; this was an improvement on previous grease lamps because it would control smoke being dispelled from the lamp, and provide greater safety precautions against fires.

Center draft lamps were also quite popular in the United States at the same time. Center draft lamps are made of glass and a container at the bottom, which holds the wick and oil. The wick can be lowered in and out of the oil to control the flame that comes from the wick. The flame from wick is then protected by a cylinder shaped glass that sits on top of the base.

Whale oil lamps came into use during the 19th century and were much improved over other styles of oil lamps, but they were a bit of a status symbol.

Oil from whales was already used to make candles, but whale oil lamps were better burned brighter and they didn’t give off a bad odor.

However, whale oil was so wildly expensive that only the wealthy were able to afford them: whale oil was priced at $200 a gallon in today’s dollars! 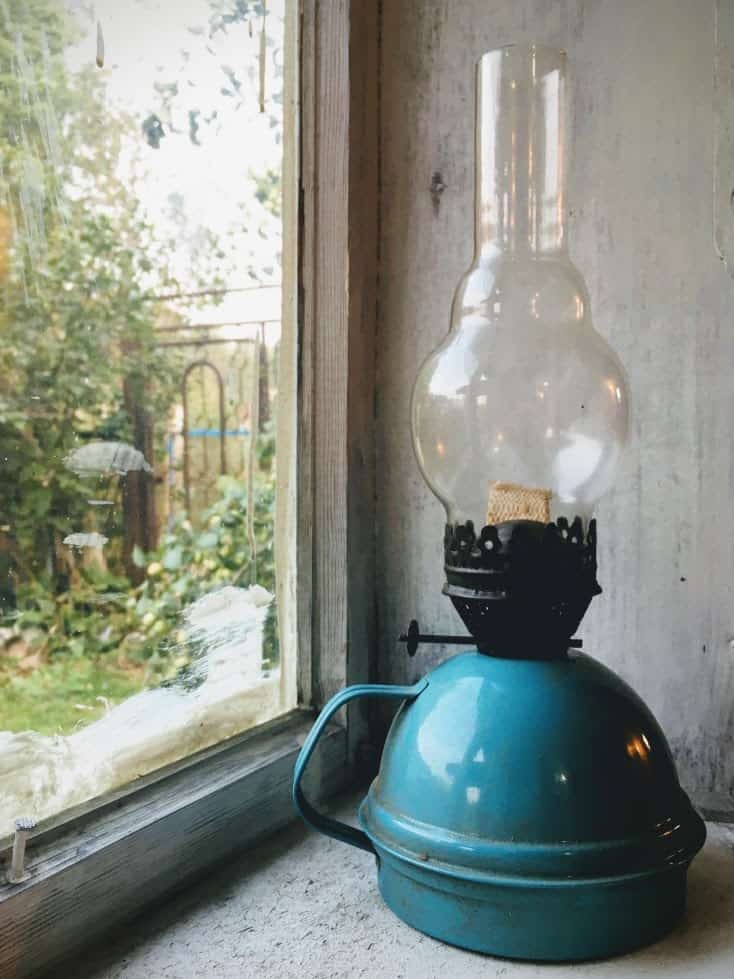 The discovery of oil in Pennsylvania during the 1850’s helped usher in a new trend for lanterns: the kerosene lamp.

Gas and kerosene lamps were able to replace lamps that relied on animal oils to provide reliable light. They were also called carbon oil lamps.

The first commercial sale of refined carbon oil lamps was in Pittsburgh, Pennsylvania, in 1859.

After production was able to resume after the Civil War had ended, kerosene lamps were in wide use throughout the United States: “Within a few years, kerosene lamps illuminated almost every American home. Many new exploration, production, and transportation industries prospered thanks to kerosene.”

Another perk to the popularity of kerosene lamps and lanterns was that they were very affordable compared to whale oil lamps.

The Aladdin Mantle Lamps were a popular model of kerosene lamps used just before electric lamps came into use.

They didn’t use a wick and had metal burners instead and the base was made of steel or brass. The top of the mantle had an abundance of holes to keep airflow provided to the flame.

A mantle would be placed on top of the base, and the mantle would typically be made of glass to protect the flame.

Remembering the Importance of Antique and Vintage Lanterns 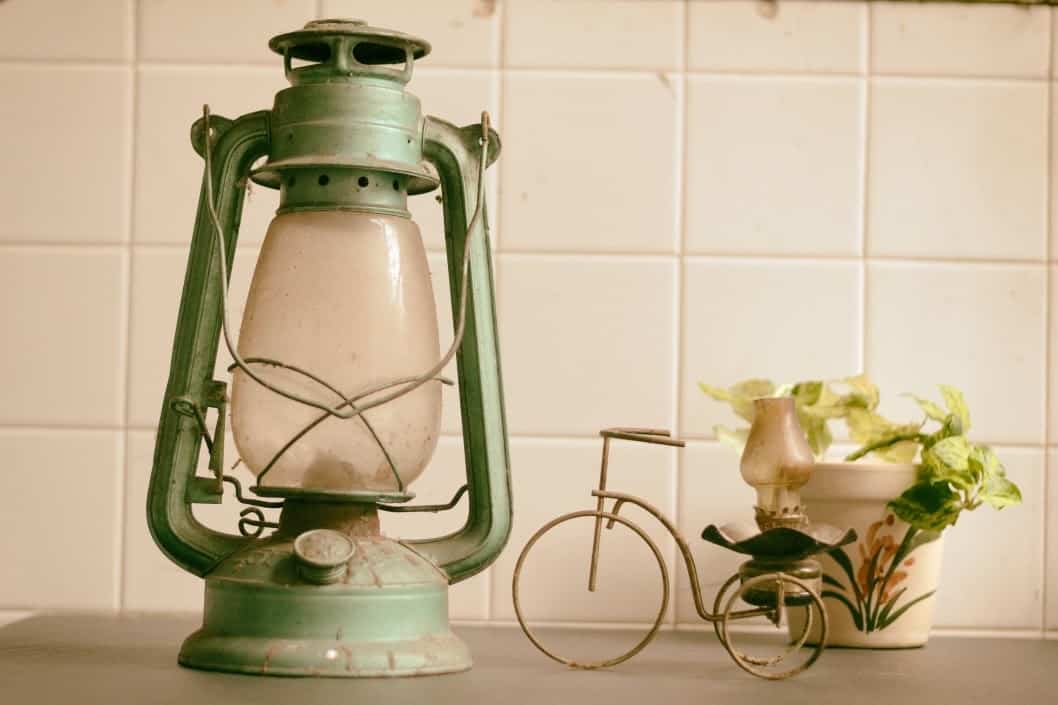 Lanterns are not as important to our industrialized cities and communities to help light our world with the abundance of electricity.

However, we are still drawn to lanterns for their beauty and importance in traditions we regularly observe, be it religious or purely for nostalgic reasons.

Lanterns were important for our health and safety during the history of humanity, and this could be why we still enjoy decorating our homes with lanterns today!

The next time you adorn your home with a lantern, see paper lanterns lighting a beautifully planned wedding, or light a kerosene lantern during a power outage, you can now remember the rich history connected to our use of lanterns. Check out Etsy's vintage lantern selection for the very best in unique or custom, handmade pieces from their lanterns shops.