Wurlitzer is one of the biggest names in jukeboxes in the world. They were huge during the Big Band era, but they’ve been referenced an innumerable amount of times in pop culture as well. From musicals like Footloose to plenty of good ole country music songs, the jukebox is well-known by even those who have never used one. 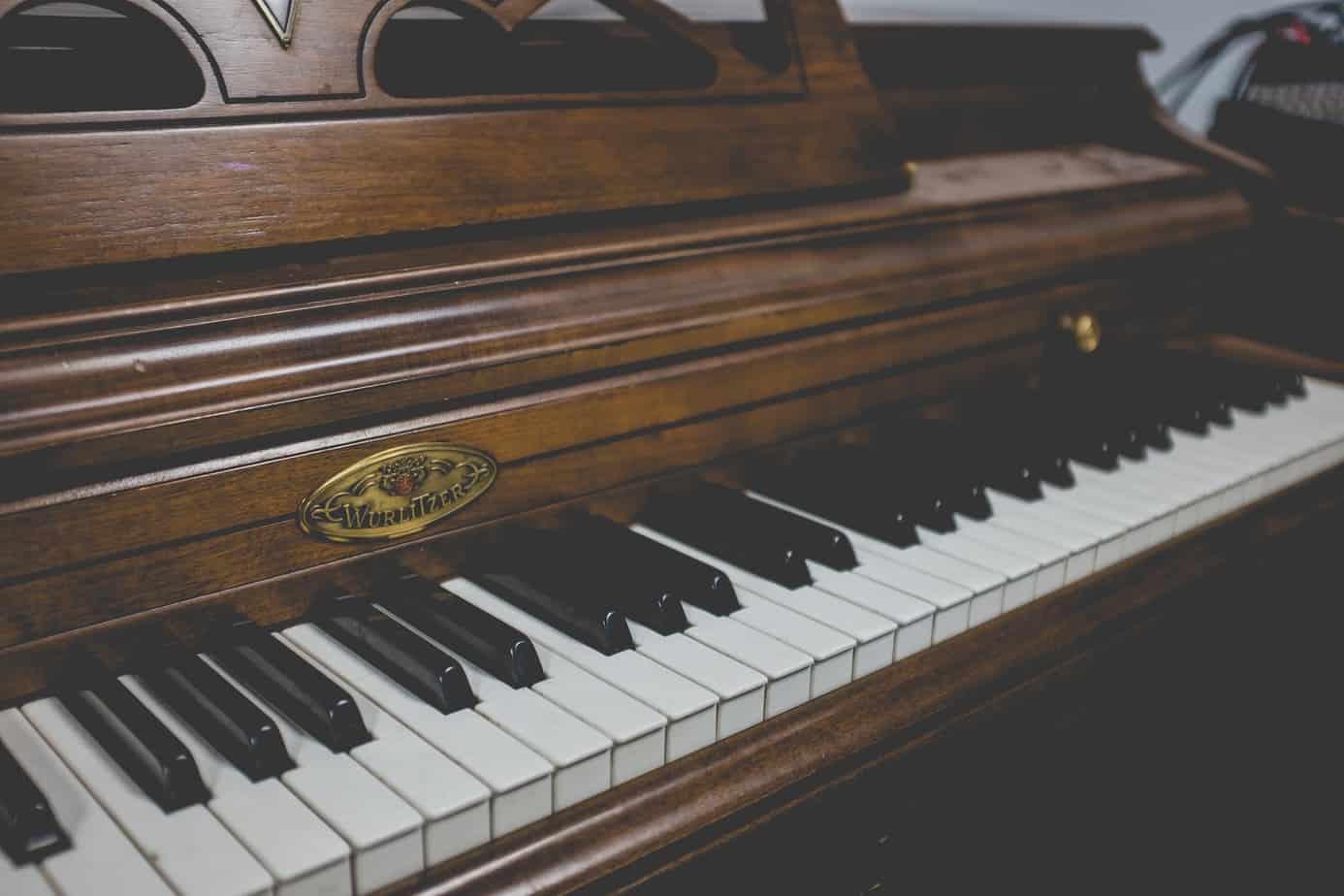 The Wurlitzer company was founded in 1853 by a German immigrant named Rudolph Wurlitzer. They began importing brass, woodwind, and stringed instruments from Germany and sold them in the United States.

Their success began with military contracts to provide the U.S. military with musical instruments during the Civil War and the Spanish-American War, but they did begin producing their own pianos in 1880 and sold them in their retail stores in Chicago.

Expansion came quickly in the form of player pianos, pipe organs, and band organs. As the popularity of fairs in the 1880s grew, they needed more mechanical rides with louder music, and the fairground organ was the perfect solution.

Eugene DeKleist built barrel organs for carousels, and Wurlitzer bought interest in his North Tonawanda Barrel Organ Factory in 1897. By 1909, Wurlitzer had purchased the entire factory. All of the Wurlitzer manufacturing operations were moved from Ohio to New York.

After the move, Wurlitzer began manufacturing automatic harps and theatre organs, the latter of which became known as the Mighty Wurlitzer and was their most famous product to date. They’re still installed in churches, museums, and theatres around the world.

World War I made it difficult to import things from Germany, so Wurlitzer increased manufacturing in the U.S. and by 1930, they had a huge manufacturing facility in North Tonawanda.

They stopped making player pianos, but they still made music rolls and hurdy-gurdys for circuses, amusement parks, and carnivals. 1933 saw a transition from being known for musical instruments to being known for jukeboxes.

In 1947, the company evolved with technology and began making electronic organs, electric pianos, and jukeboxes. They also made vending machines.

In the 1960s, they made studio, console, spinet, and grand pianos. They purchased several other companies that made appliances, radios, and carnival rides.

They sold and moved their manufacturing operations to Germany in 1973. The U.S. manufacturing facilities and the organ brands were acquired by Baldwin Piano & Organ in 1988, at which time the piano manufacturing also moved overseas.

In 1996, Baldwin Co. and all Wurlitzer assets were sold to the Gibson Guitar Corporation. It would be ten more years before Gibson would also purchase Deutsche Wurlitzer, Wurlitzer Jukebox, and Vending Electronics trademarks.

Later models are equipped with CD players while some are capable of iPod connectivity. However, they stopped making pianos in 2009 and jukeboxes in 2013. For a time, Wurlitzer still sold replacement parts, but the company has since dissolved.

While Wurlitzer was very well known for its musical instruments, they were much more well-known in their later years for jukeboxes. Here are some of the most popular models. 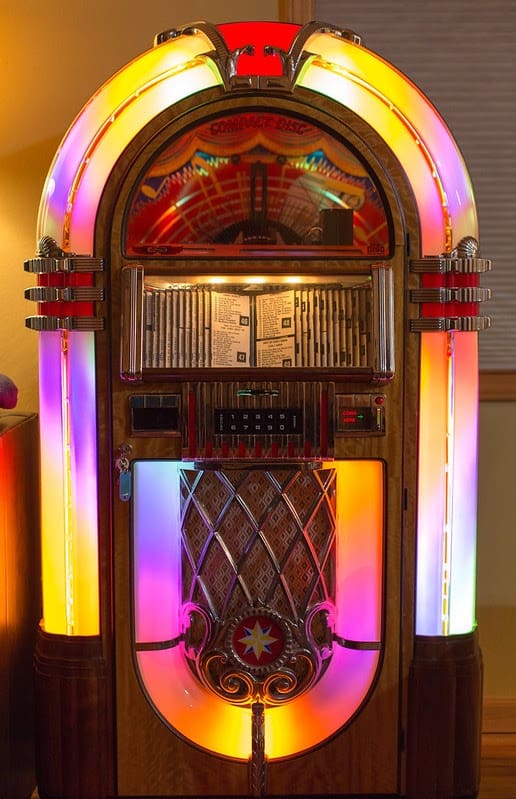 This Wurlitzer jukebox was more affectionately known as The Bubbler, thanks to its arched tubes framing the shape of the jukebox that lit up and bubbled. It was designed by Paul Fuller in 1946 and it took two years for Wurlitzer to sell 56,000 units.

Was it due to its “bubbly” design or the fact that our boys were back from war and deserving of celebration? No one will ever know. Either way, the eye-catching effects made it one of the most popular jukeboxes ever.

The effect of the tubes was created by heated crystals at the end of each. When the crystals were heated by a resistor, the fluid inside boiled. The dye also made the bubbles stand out. It’s likely that when you think of a jukebox, you think of this design, because it had such an impact on pop culture.

These were made in abundance, so they’re relatively easy to find, and not as expensive as other models. You can expect to pay around $8000 for one that’s been fully restored.

Read about some of the best retro jukeboxes you can find today. 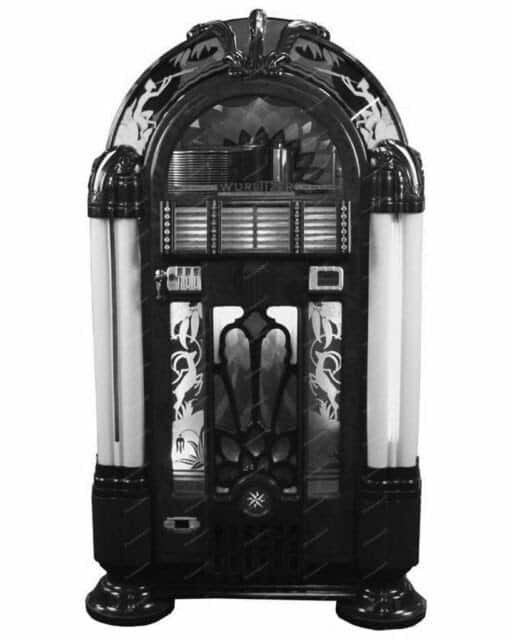 The predecessor to The Bubbler was the Victory Model 950. It was made during World War II when materials were short. Somehow, designer Paul Fuller managed to come up with a beautiful design using wood and plastic parts that would normally have been made of metal or glass.

This is one of the more rare designs that’s difficult to find. Collectors will pay sometimes as much as $50,000 for these.

This model was released in 1935 and goes for even more money. It’s rare, and extremely valuable, even unrestored. It was intended to be a prototype and never produced in mass quantities. In fact, it never even saw the production line.

Only three are known to be remaining, so if you can find one, you’ll pay at least $70,000 for it. The design is very simple and rudimentary, but still functional, and highly desirable by the collector.

There are a lot of other famous jukebox models worth checking out like Select-O-Matic and Seeburg. However, Wurlitzer is one of the most well-known throughout the world, and not only for their jukeboxes.

If you’re in the market for old and unique instruments, Wurlitzer is worth a look. If you want to add to your vintage jukebox collection, no set would be complete without at least one Wurlitzer model.

Whether you want something colorful and bubbly or something more traditional, you’ll find a Wurlitzer that fits in perfectly.