If you’ve been known to raise a glass every now and then (who hasn’t?) you may want to add some flair to the festivities by offering up vintage drinking glasses. They’re a fun way to serve up your favorite cocktails or desserts.

There are plenty of different designs to choose from and they’re relatively affordable, so you can stock up on your favorites and have them on hand the next time you need them. 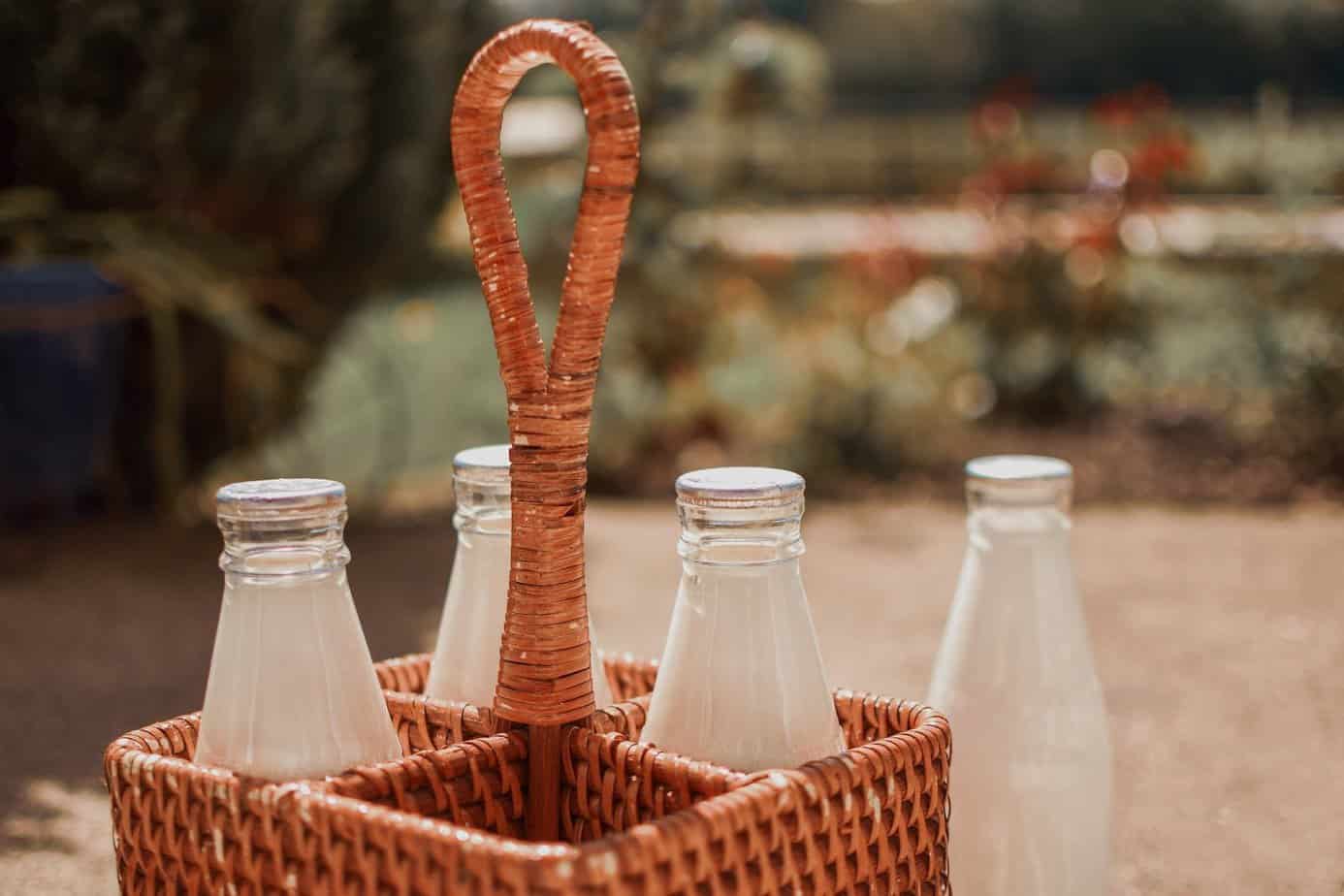 Milk deliveries from local dairies used to be very common. Originally, milkmen would fill jugs that the customer already owned, but milk bottles soon became a big part of these deliveries. While these deliveries began around 1785, the first milk container patent was issued in 1878.

The first reusable milk bottle was designed with a cap by Harvey D. Thatcher in 1884 and if you’re looking for collectible milk bottles, you may want to look for these originals. These Thatcher Common Sense Milk Bottles are rare and very collectible. A patent was issued for them in 1900.

Milk bottles came in several different shapes and sizes. Prior to 1930, they were round, but in 1935, the UK began to see an abundance of bottles with slender necks. Short, square bottles became popular in the 1940s, and they’re still one of the most popular shapes today.

You can also tell a lot from the type of label on the bottle. Etched labels were common in all eras of the milk bottle, so it will tell you very little about how old the bottle is. Etched labels are typically handwritten or stamped into the bottle.

A raised or embossed label with the dairy’s name or symbol are typically from prior to 1933. Manufacturers added this design to the bottle using a slug during the manufacturing process.

Large dairies used bottles with a raised design covering the entire bottle. They had special molds that they used to make these bottles and it was a fairly unique process, so there aren’t as many of these around.

After 1933, many dairies transitioned to applied color labels. They featured the name or the symbol of the dairy and came in single colors like red, blue, and black. They were rarely, if ever, comprised of more than one color.

If you’re concerned about being fooled by reproduction bottles, keep in mind that new color labels are painted on and very easy to scratch off. Real applied labels won’t do this. You should also be leary of bottles with war slogans or Disney images, as these are often imitations.

You may associate these types of glasses with a 1930s speakeasy, but they were invented by a monk in the 17th century and became popular for sipping champagne in 17th century France.

For years, they were the most fashionable way to sip champagne, and rumors began to spread about how the design was thought up. Many thought King Louis XVI of France molded them after his wife’s breast. Alas, that’s just not the case.

The broad bowl design prevents champagne bubbles from lingering, unlike a flute or a tulip shape, where the bubbles are encouraged to bounce. By 1960, the coupe glass fell out of use in Europe.

However, on the other side of the pond, the glass was rising in popularity. After prohibition, the coupe was popular all the way up until the 1980s. It is one of the most iconic and recognizable glasses today.

Even though its popularity dwindled as the golden age of Hollywood ended, bartenders still use it today as a virtually spill-proof alternative to the martini glass. It’s also an excellent choice for cocktails that are poured without ice or for a clever spin on a dessert dish. 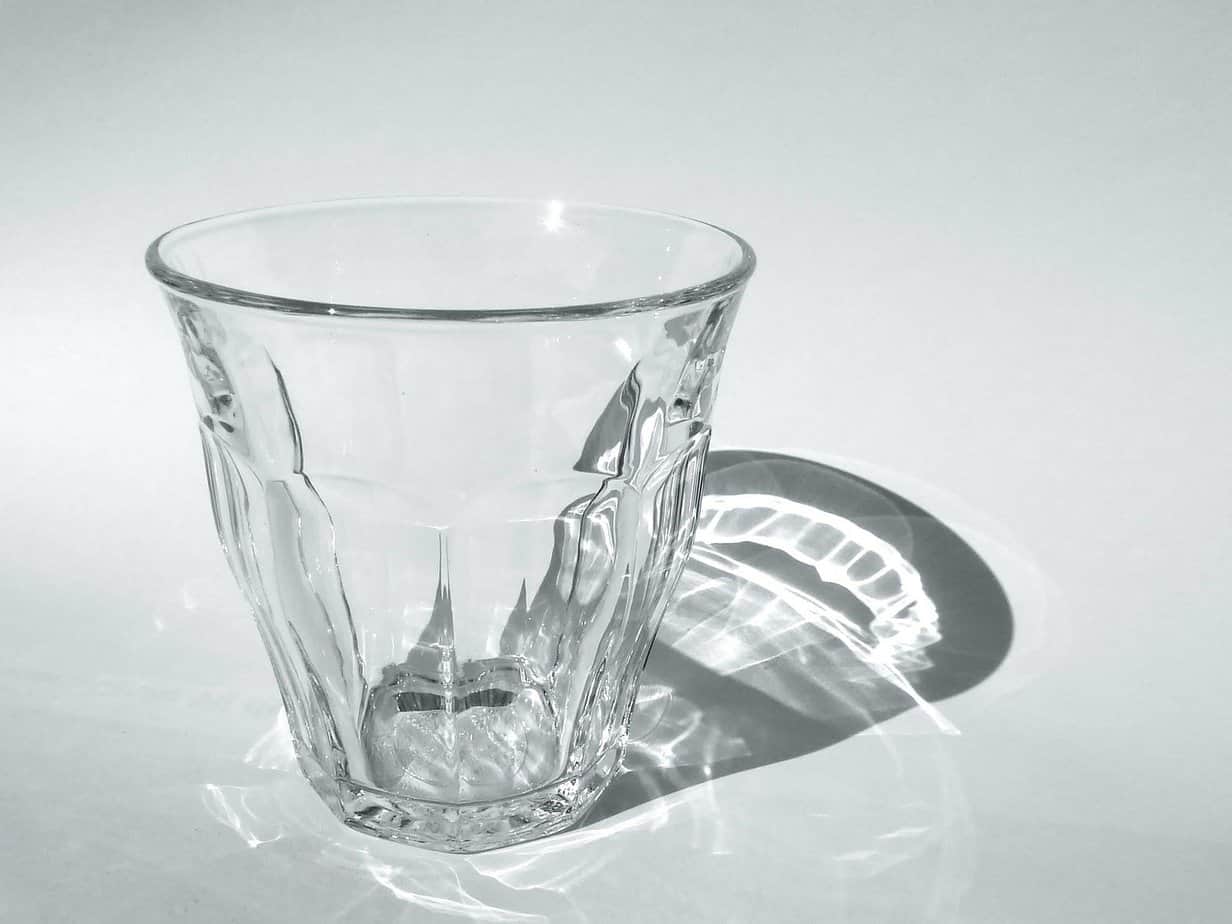 This iconic tulip design, officially called a picardie glass, is another vintage glass that found their way into many a grandmother’s kitchen. They’re made by Duralex, a French glassware manufacturer, which has been around for almost a century.

These glasses are named for the Picardy region in France and they are manufactured exclusively in France. The design is popular in French bistros and cafes throughout the country, but they were also popular in the 20th century United States as a dinner glass.

These tumblers are ideal for sipping sweet tea. Perhaps the best things about them are that they’re sturdy, chip-resistant, and stackable. It’s no wonder they were so popular. While you can get vintage glasses at antique shops, this design is still in production and you can get them brand new. 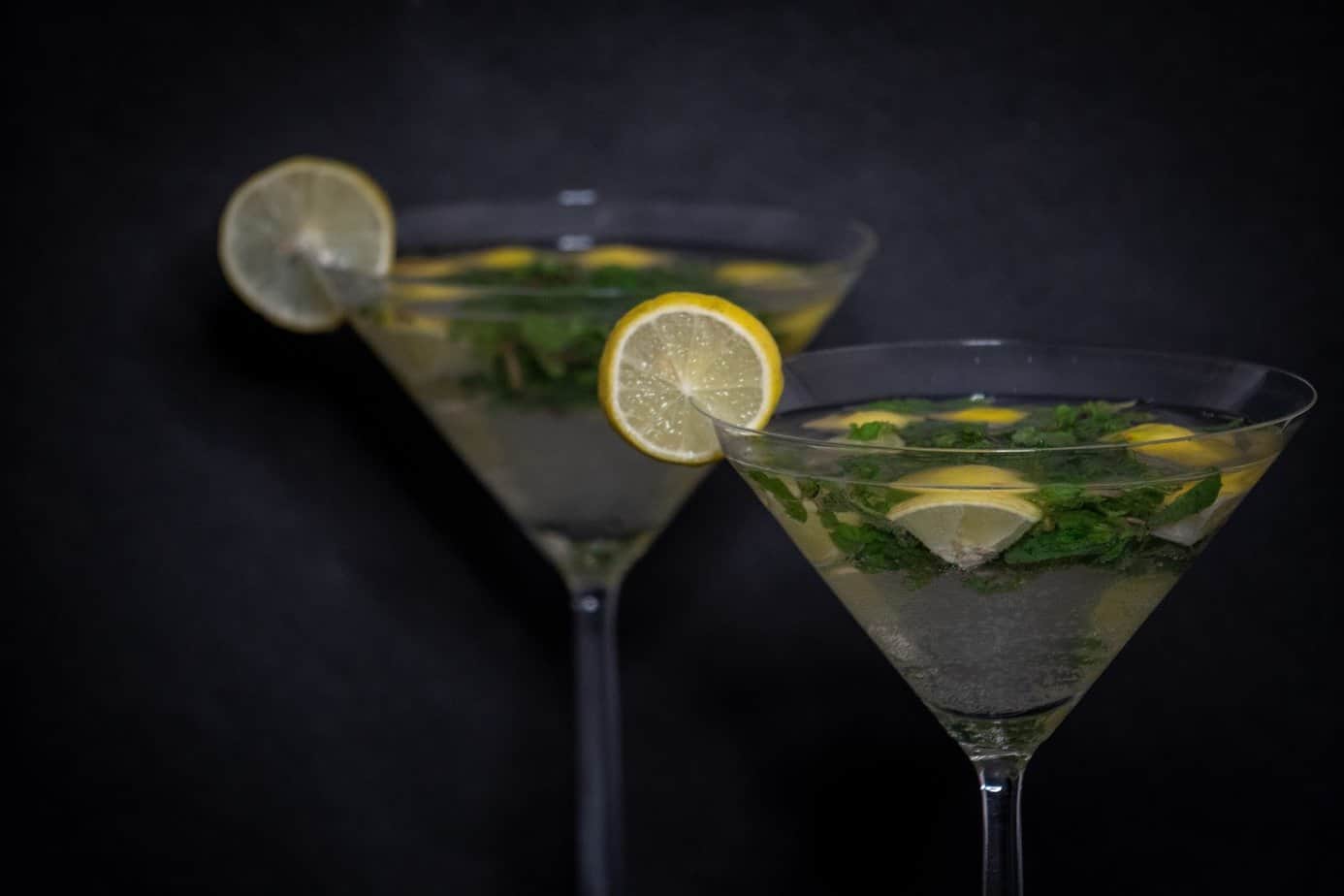 These iconic glasses are still very commonly used today. They have definitely stood the test of time and are worthy of being a part of your vintage drinking glass collection along w. But did you know that the martini glass comes from the cocktail glass design, which has been around since before the drink?

The cocktail glass was designed to hold drinks meant to be chilled. When a drink is served “up,” it is shaken or stirred with ice, but then poured into the glass without the ice. The long, thin stem ensures that the drink isn’t warmed up too much by the drinker’s hand and not watered down by adding ice.

The martini glass wasn’t a distinct glass until the early 20th century. The stem grew longer, the rounded sides straightened, and the rim got wider. Now, the martini glass is slightly different than the cocktail glass.

However, much the same as the cocktail glass, the martini glass was made for practicality, not style. The long stem ensures that the drink stays frosty and doesn’t warm up too quickly. The wider rim gives the gin access to air and helps it open up.

The steeply sloping sides support a toothpick with olives and prevent the drink’s ingredients from separating in the glass. These glasses are sophisticated and functional, and they make a great addition to any home bar. 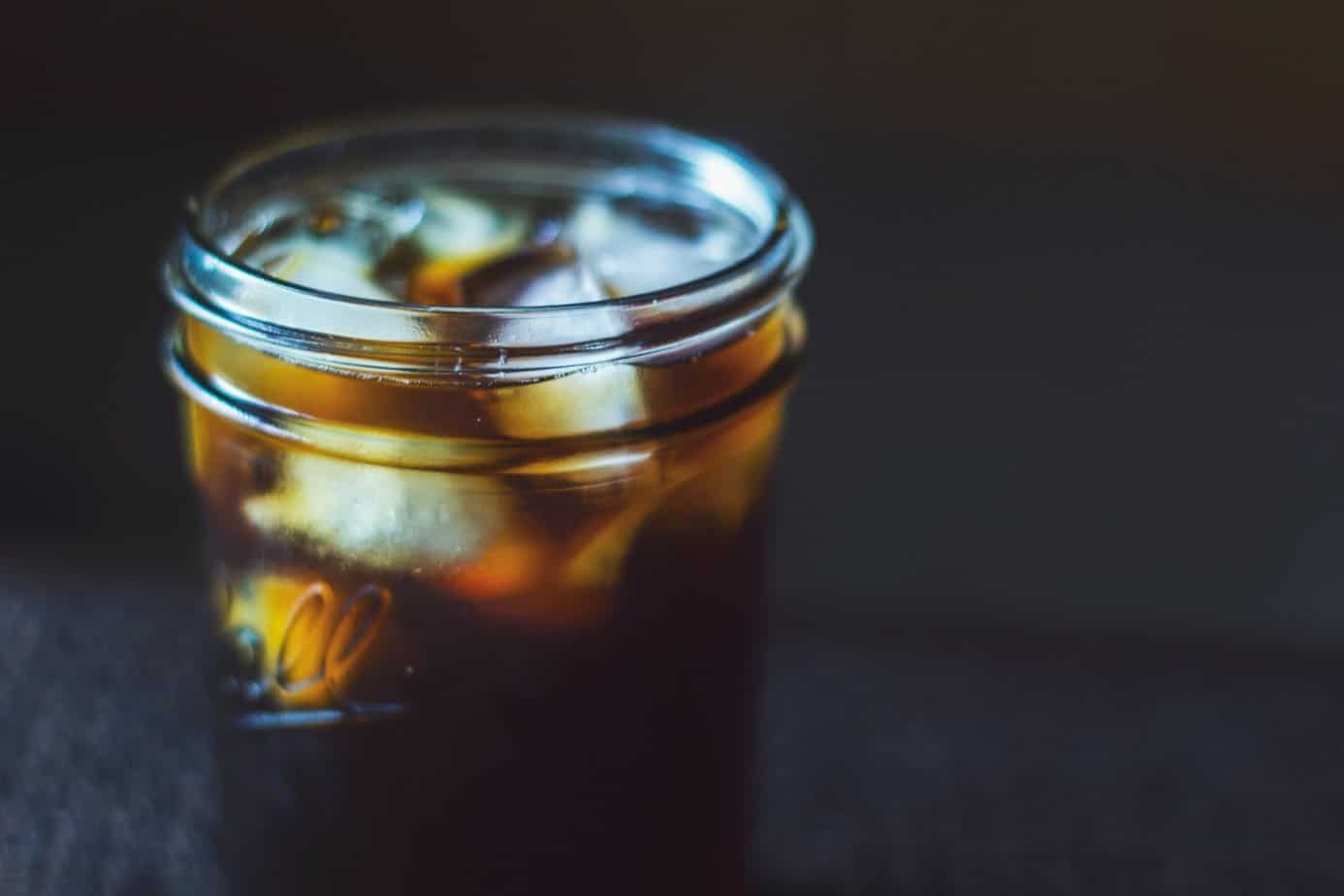 Mason jars are called such because they were invented by a man named John Landis Mason in 1858. While he patented the jar, he wasn’t the first person with the idea to preserve food in a sealed container.

That right goes to Nicolas Appert, a French chef who invented the method. He used glass jars with sealing wax to secure a tin lid. The process was complicated and rife with errors, but was still popular through the 1830s and 1840s. The method was still used for fruit until 1890.

However, because of the simplicity of the mason jar style, the wax seal method went out of style quickly and was replaced with the metal rings that screwed down tightly to secure and seal a steel lid against the rim of the jar.

While the metal rings and glass jars are reusable, the steel lid is meant to be for a single use. This method creates a hermetic seal and is so effective that it’s used in commercial and home canning still today.

Popular brands include Ball, Atlas, Jardin, and Kerr. Collectors can find a variety of these antiques at online action sites and the value is based on condition, color, and age. However, mason jars have recently surged in popularity for other novel uses like drinking iced tea, displaying floral arrangements, and homemade light fixtures.

Related: A classic mason jar is the perfect vessel for one of these iconic liquors.

There are a lot of other vintage designs like soda fountain glasses, whiskey tumblers, beer glasses, and more. All are worthy of every vintage collection, and with so many options to choose from, you may need more space!